Every organization which has adopted DevOps practices wants to quickly adopt "Continuous" everything, be it integration, deployment, testing, or monitoring. For a successful DevOps operation, CI/CD is very important for any small or big size organization to shorter development cycles and innovate faster, reduce deployment failures, safe rollbacks and reduce MTTR (mean time to recover).

In this article, we will uncover a new way of bringing continuous integration and continuous delivery of applications to your Kuberenetes cluster. We are using Jenkins as the CI tool, which will poll the Git repositories to build Docker images on commits and push it to Docker registry. We will use Spinnaker as the CD tool, which continuously polls the Docker registry and triggers the deployment pipelines to update applications in your Kubernetes cluster.

The above diagram shows when the developer commits changes to Github, Jenkins polls for commits to a configured branch and triggers a new build on a new commit. Jenkins builds the Docker image and pushes it to the Docker registry with a tag (you can choose different techniques to tag your images like using the build-commit number or an incremental number). With Spinnaker, we configure the deployment pipeline such that it will trigger the deployment when there is a new tag (Docker image) found in the registry.

Spinnaker is an open source, multi-cloud continuous delivery tool created by Netflix. It allows us to configure multiple deployment strategies such as Highlander, Red/Black. It not only allows us to rollback in case of failures but also trigger promoted pipelines. Meaning we can configure complex pipelines by allowing us to define testing pipelines and promote to next stage or rollback easily and safely in controlled Kubernetes cluster(s). We will learn more about deployment strategies and pipeline configuration in next article in this series. 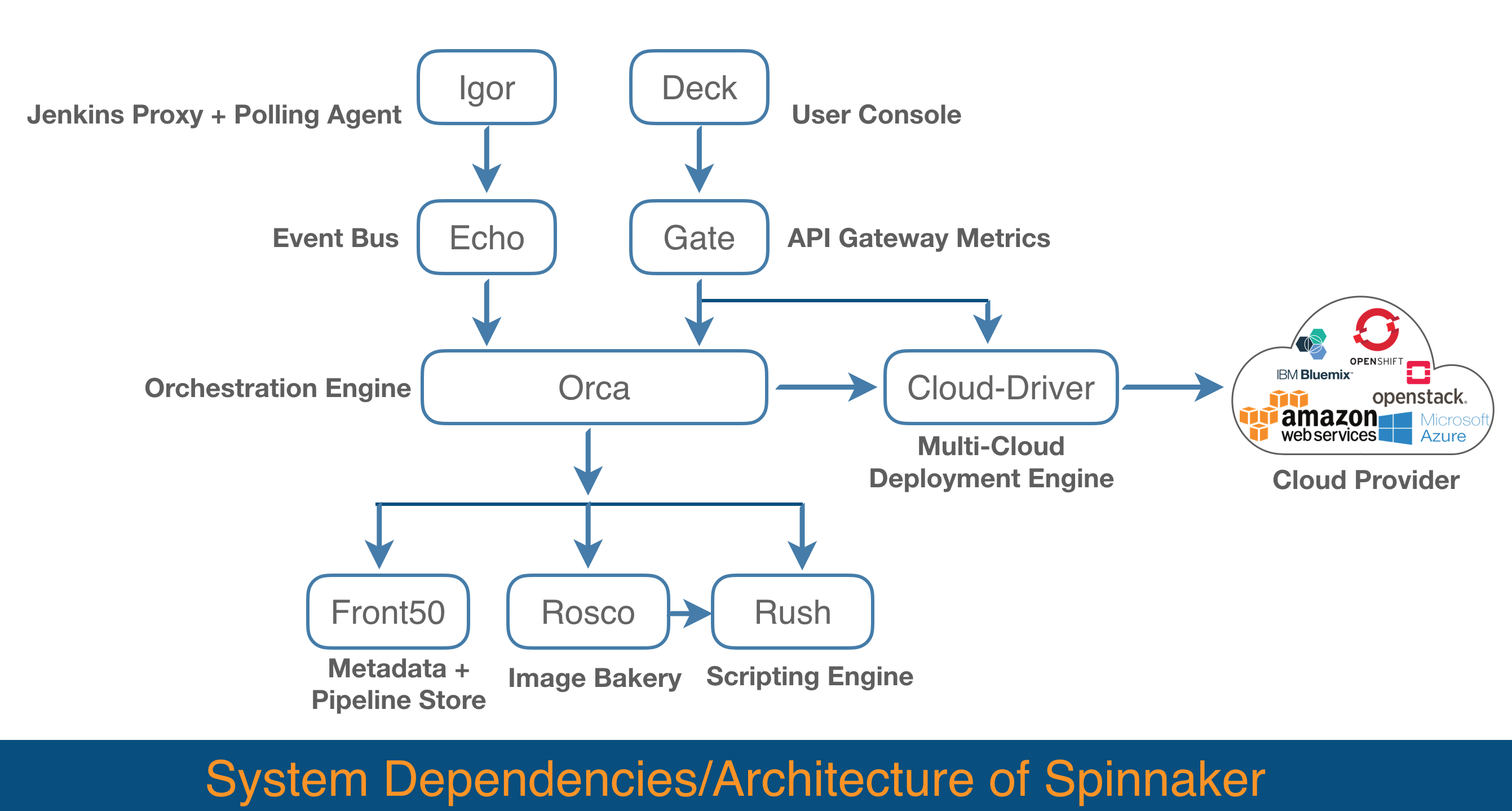 You can view the detailed dependency matrix and default bind ports for the follwing components at Spinnaker's official documentation page.

Orca: Pipelines and other ad-hoc operations are managed by this orchestration engine called Orca.

Clouddriver: Indexing and Caching of deployed resources are taken care by Clouddriver. It also facilitates calls to cloud providers like AWS, GCE, and Azure.

Echo: It is responsible for sending notifications, it also acts as incoming webhook.

Igor: It is used to trigger pipelines via continuous integration jobs in systems like Jenkins and Travis CI, and it allows Jenkins/Travis stages to be used in pipelines.

Front50: It's the metadata store of Spinnaker. It persists metadata for all resources which include pipelines, projects, applications and notifications.

1. We start with the Halyard installation. It is the lifecycle manager of Spinnaker deployment.

The following command will install the latest version of Halyard.

2. After that will set the Spinnaker version which we want to use.

This will run Minio as a container on the server and add Minio as storage in Spinnaker.

4. After setting up storage for Spinnaker, we will add Kubernetes cluster(s) as cloud-provider(s).

The account name will be the name of the Kubernetes cluster. This way we can manage multiple cloud-providers (K8s clusters) managed from single Spinnaker.

Kubeconfig-file will be the config file of Kkubernetes which you can get from the "~/.kube/" folder on the Kubernetes master node.

5. Once we add cloud-provider, it will deploy the changes to Spinnaker.

You can connect with Arvind and Karan on LinkedIn