Welcome back to our series on Node.js for beginners! Last time, we went over the advantages of using Node.js and Express, got our environment set up, and coded up some basic web pages. In today's post, we'll go over the roles of templating engines in Node.js applications and figure out how to use them to get some basic HTML markup onto our pages.

I'll be basing the app I work on in this series of a project from a Udemy course (found here) that I've been using on-and-off for a while. I love to travel, and the US National Parks are some of my favorite places to go. To teach myself Node.js, Express.js, templating engines, and Bootrap, I'm going to design an application to keep track of my park travels.

Templating engines are essentially pieces of software that allow you to render markup on the web pages you create with the powerful Node/Express combination we explored in the last article. The explanation given by the Express docs, which is far better than a beginner developer like me could do, is as follows:

Per these same docs, web developers working with Node and Express tend to use one of three popular template engines: Pug, Mustache, and EJS. After poking around the documentation for each of these options, I ultimately decided to go with EJS as it allows me to use actual HTML to create my markup, rather than a syntactically similar, but ultimately different, style of code.

To give a quick example of these three template engines, I'll show how to create a simple list using each. (Note: the code for Pug and Mustache in this section is taken from the docs linked to above.)

Here's how we'd have to go about creating a list with Pug:

In a Mustache view file, we'd have to enter the following code:

In the Mustache template file, we'd then enter this code:

The output would, just like Pug, be rendered as standard HTML:

In EJS, all we have to do is create a .ejs file, let's say landing.ejs, link this page in our Express code, and then type in regular old HTML. Here's an example:

To me, this seems much easier. But I also don't want to make it seem like Pug and Mustache aren't great options. They're widely popular and have huge open source communities around them. No matter which of the three you go with, you'll be working with great software. EJS just makes the most sense to my (admittedly strange) mind.

As promised in my last article, we'll make the basic pages we got to render using basic Express actually look like a web page (granted, at first, it'll look like something straight outta the '90s). And that's why I'm bringing EJS into this tutorial.

To get EJS onto your machine, run the command  npm i ejs --save. Like in the section above on creating a list in EJS, we then have to tinker with the app.js file we were using to get my Node servers and Express pages up and running. In this file, we have to tell Node that we're using EJS as our templating engine. We can do this like so:

Okay, now Node knows to use EJS to render the markup for our web pages. Awesome! Next, we need to create some actual EJS files. This part is pretty simple. cd into our dzone_app1 project, and create a views directory with the command $mkdir views. Within this directory, let's create our first EJS file (I've called my file landing.ejs) with the command $touch landing.ejs.

Fantastic! Now that we've got that file going, we can punch in the following HTML:

Then, if we run our server with the node app.js command, we should see the HTML render on the page. 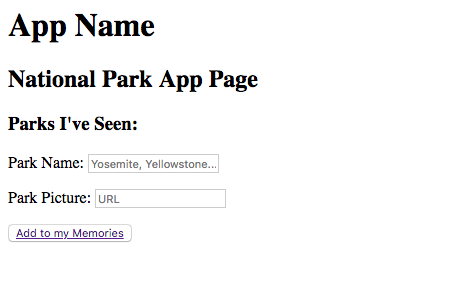 Voilà! Magnifique! Alright, that might be hyperbole, but I'm still super happy that in just two days we've gone from Node novices to an actual web page using a markup language. Pretty neat.

To get the basic skeleton of the application down, let's create one more page, which I'll denote in my app.js file as /parks. The JavaScript to create this page server-side will look like this:

Then $touch another EJS file, parks.ejs, and label it with a basic h2 tag (more for organizational purposes than coding reasons).

When we restart the server, and go to the page, ending the URL address in /parks, we should see the following:

Cool! We now have two pages with the basic HTML skeletons set up for our app. In the next article, we'll link these pages together and implement some basic JavaScript logic.