if anything at all, our jooq talks at various jugs and conferences have revealed mostly one thing:

and it isn’t even necessarily our fault. we’re just not exposed to sql nowadays.

but consider this: we developers (or our customers) are paying millions of dollars every year to oracle, microsoft, ibm, sap for their excellent rdbms, only to ignore 90% of their database features and to perform a little bit of crud and a little bit of acid with orms like hibernate. we have forgotten about why those rdbms were so expensive in the first place. we haven’t paid attention to the various improvements to the sql standards, including sql:1999 , sql:2003 , sql:2008 , and the recent sql:2011 , which are all mostly left unsupported by jpa .

if only we java developers knew how easy and how much fun it can be to replace thousands of lines of erroneous java code with five lines of sql. don’t believe it? check this out:

instead of simply promoting jooq, we started to help java developers appreciate actual sql, regardless of the access pattern that they’re using. because true sql can be appreciated through any of these apis:

how the above apis can be leveraged in java 8 can be seen here.

and believe us, most developers were astonished by what was possible in sql, when they saw our nosql? no, sql! talk:

so let’s delve into the essence of the talk and calculate a running total with sql. what’s a running total? it’s easy. imagine you have these bank account transaction data in your database:

you’ll notice immediately, that the balance per account transaction is missing. yes, we want to calculate that balance as such:

if we’re assuming that we know the current balance on the bank account, we can use each account transaction’s amount value and subtract it from that current balance. alternatively, we could assume an initial balance of zero and add up all the amount value till today. this is illustrated here:


each transaction’s balance can be calculated through either one of these formulas:

but how can we do it in sql?

most of us would probably pull out a little java programme out of their sleeves, keeping all the amounts in memory, writing unit tests, fixing all sorts of bugs (we’re not mathematicians, after all), wrestling with bigdecimals , etc. few of us would probably go through the hassle of doing the same in pl/sql or t-sql, or whatever other procedural language you have at disposition, and possibly update each balance directly into the table when inserting / updating new transactions.

but as you might have guessed so far, the solution we’re looking for here is a solution in sql. please bear with us as we’re going through the examples. they’re getting better and better. and if you want to play around with the examples, download oracle xe and the running-totals.sql script and get up and running!

let’s assume that we have a view like v_transactions , which already joins the accounts table to the account transactions table in order to access the current_balance . here’s how we would write this query, then: 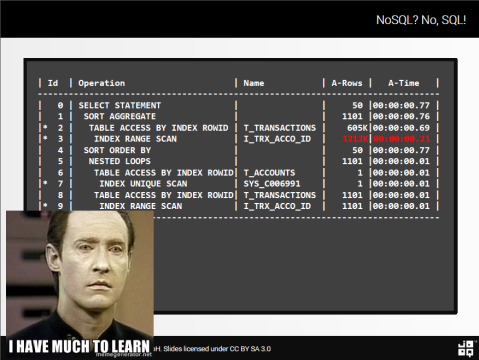 nope. as you can see, for the relatively simple sample data set (only 1101 records filtered from account_id = 1 in line 9), there is an index range scan materialising a whopping total of 1212k rows in memory. this looks like we have o(n 2 ) complexity. i.e. a very naïve algorithm is being applied.

(and don’t think that 770ms is fast for this trivial query!)

while you could probably tune this query slightly, we should still feel that oracle should be able to devise an o(n) algorithm for this simple task.

no one enjoys writing recursive sql. no one. let me convince you.

for simplicity, we’re assuming that we also have a transaction_nr column enumerating transactions in their sort order, which can be used to simplify recursion:

ready? check out this gorgeous piece of sql!

ach… how to read this beauty?

essentially, we’re self-joining the view (common table expression) that we’re about to declare:

in the first subselect of the union all expression, we’re projecting the current_balance of the account, only for the first transaction_number .

and because we’re recursing into the ordered_with_balance common table expression, this will continue until we reach the “last” transaction.

now let’s make an educated guess, whether this performs well… 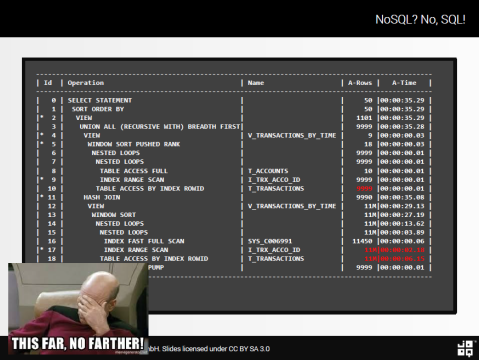 well. it doesn’t. we get even more rows in memory, namely 11m rows for what should be at most 1101 . parts of this plan are due to the fact that the transaction_number utility column is another calculated column that couldn’t be optimised by oracle. but the essence here is the fact that it is already very hard to get it right , it’s even harder to get it fast .

the best solution for this problem is this one:

essentially, we’re doing exactly the same thing as with the nested select. we’re subtracting the sum() of all amount values “over” the subset of rows that is:

and now, does this perform? 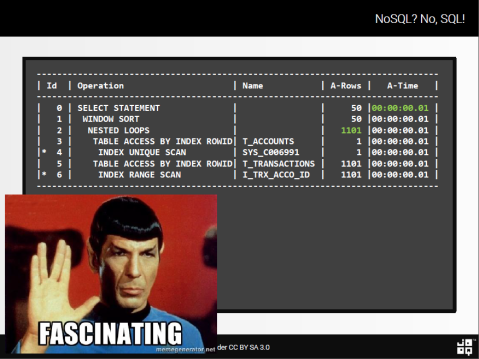 it couldn’t be much faster! window functions are probably the most underestimated sql feature .

now, this is more of a special treat for those sql nerds among you who want to piss off your fellow developers with eerie, weird-looking sql. the model clause (only available in oracle).

now, how to read this beast? we’re taking the sample data and transforming it to:

still too abstract? i know. but think about it this way: 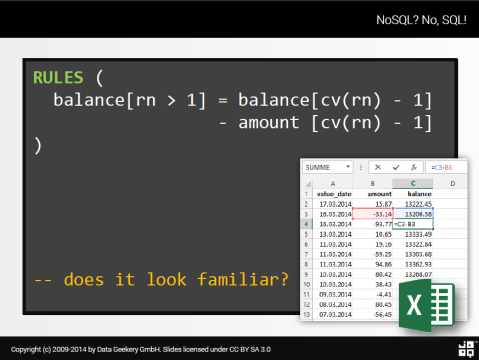 does it remind you of something?

ms excel! every time you have a problem that your project manager thinks is peanuts to solve with his fancy ms excel spreadsheets, then the model clause is your friend!

and does it perform? 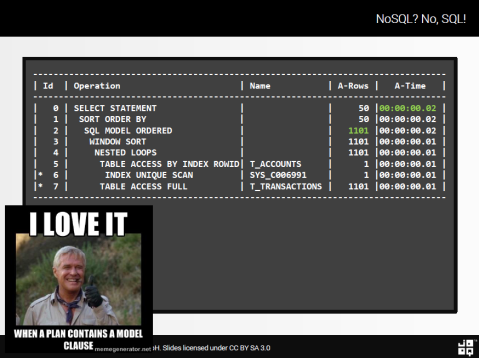 execution plan for the model clause

… pretty much so (although the above shouldn’t be confused with an actual benchmark).

if you haven’t seen enough, see another great use-case for the model clause here . and for all the details, consider reading oracle’s official model clause whitepaper

did you like the above examples? don’t worry. when you’ve seen these things for the first time, they can be pretty confusing. but in essence, they’re really not that complicated. and once you have those features in your tool-chain, you will be indefinitely more productive than if you had to write out all those algorithms in an imperative programming language.

if you want to play around with the examples, download oracle xe and the running-totals.sql script and get up and running!

at data geekery , we always say:

and sometimes, we also quote winston churchill for having said something along the lines of:

sql is the worst form of database querying, except for all the other forms

indeed, as the model clause has shown us, sql can become very extreme. but once you know the tricks and expressions (and most importantly, window functions ), you’ll be incredibly more productive with sql than with many other technologies, if the task at hand is a bulk calculation operation on a simple or complex data set. and your query is often faster than if you had hand-written it, at least when you’re using a decent database.

so let’s put sql to action in our software!

are you interested in hosting our nosql? no, sql! talk at your local jug or as an in-house presentation? contact us , we’re more than happy to help you improve your sql skills!

Published at DZone with permission of Lukas Eder. See the original article here.