Welcome to part two of our series on how to integrate Apache Airflow and YugabyeDB. In part one we showed you how to get Airflow configured to use YuagbyteDB as a backend. In this second post we’ll show you how to build an Airflow workflow that will migrate data between PostgreSQL and YugabyteDB.

In this post we are going to build a simple Airflow DAG – or a Directed Acyclic Graph – that detects new records that have been inserted into PostgreSQL and migrate them to YugabyteDB. In a subsequent post we’ll dive deeper into DAGs and create more complex YugabyteDB workflows.

Below is the environment that we’ll be using for the purposes of this blog.

Note: For the purposes of this demo, we aren’t creating a particularly secure deployment, instead we are focusing on demonstrating how to wire everything up with the least amount of fuss. In a production deployment you’ll want to enforce additional security measures throughout the stack.

Step 1: Deploy a VM for PostgreSQL

For the purposes of this demo, I have specified the following configuration for the Google Compute Engine VM that will be hosting my PostgreSQL server.

Step 2: Install PostgreSQL on the VM

To install PostgreSQL on the postgresqlvm VM run the following commands:

Verify that PostgreSQL is installed by running the following command:

By default, PostgreSQL doesn’t allow remote connections. In order for Airflow to communicate with PostgreSQL, we’ll need to change this setting.

To enable remote connections we’ll need to make a few tweaks to the pg_hba.conf file using the following steps:

Scroll down to the bottom of the file and add the following lines:

Next, edit the postgresql.conf file.

Scroll down to the line that begins with #listen_addresses = 'localhost' in the Connections and Authentication section.

Uncomment the line and replace localhost with *

There are DDL and INSERT scripts we’ll need to download onto our PostgreSQL VM so we can build our demo.

For Apache Airflow to be able to connect to the PostgreSQL database, we need to create a password for the default postgres user which by default has none. Either execute the following script in your shell or use your favorite GUI tool.

Create a database called northwind that we’ll be using for our demo.

Create the Northwind objects and load the data

You should now see 14 tables loaded with data. 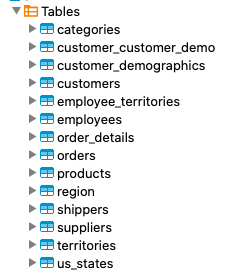 At this point we have PostgreSQL running on a Google Compute Engine virtual machine with remote connections enabled and the Northwind sample database built.

Create a database called northwind that we’ll be using for our demo.

Create the Northwind objects and load the data

You should now see 14 tables populated with data.

The next two steps involve opening up ingress and egress points for PostgreSQL and YugabyteDB in GCP. This can be accomplished in the same way we illustrated in the first post, part 1 step 2, where we configured the Airflow networking rules. Inside of the GCP Console, navigate to VPC Network > Firewall Rules.

To add the connection configuration that Apache Airflow will use to connect to the PostgreSQL and YugabyteDB databases, go to Admin > Connections in the Airflow UI. 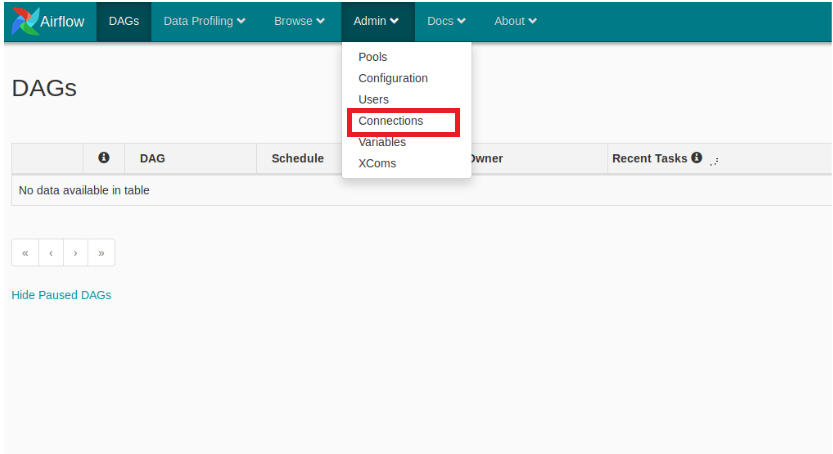 Add an airflow_postgres connection with the following configuration:

Repeat the process to add an airflow_yugabyte connection with the following configuration:

Airflow task files are written in Python and need to be placed in ${AIRFLOW_ HOME} /dags. To create a Python file called db_migration.py by running the following commands:

Add the following code to the db_migration.py file:

The DAG above finds the new product_id and order_id’s in PostgreSQL and then updates the same product and order tables in YugabyteDB with the rows greater than that maximum id. The job above is scheduled to run every minute starting on today’s date.

It might take a minute or two to populate, but the task should now be available under the DAGs tab.

Manually execute the task by clicking on the execute button as show below:

You can also verify that the task has been executed by looking at the log files located at ${AIRFLOW_HOME}/logs/scheduler/latest/db_migration.py.log

Finally, enable the one minute schedule of the postgres_yugabyte_migration task by toggling the On button as show below:

Verify the number of rows in the product and order tables in both the PostgreSQL and YugabyteDB with a simple SELECT COUNT(*). You should see the following:

Log into the PostgreSQL database and update the products and orders tables with two additional rows in each table.

After the next scheduled run of the task, you can query YugabyteDB and find both the products and orders tables and verify that they have been updated with the new records.

As the DAG continues to run, you can insert additional data on the PostgreSQL side, have Airflow move the data to YugabyteDB, and track the runs in the Airflow UI by going to Browse > Dag Runs.

That’s it! If you have worked through the steps in part one and part two (this post) of this series, you now have the following deployed:

We are just getting started! Stay tuned for an upcoming blog post where we will dive deeper into creating more complex DAGs that integrate Airflow, YugabyteDB, and a variety of other cloud native technologies.