Understanding the technique used to pass information between variables and into methods can be a difficult task for a Java developer, especially those accustomed to a much more verbose programming language, such as C or C++. In these expressive languages, the developer is solely responsible for determining the technique used to pass information between different parts of the system. For example, C++ allows a developer to explicitly pass a piece of data either by value, by reference, or by pointer. The compiler simply ensures that the selected technique is properly implemented and that no invalid operation is performed.

In the case of Java, these low-level details are abstracted, which both reduces the onus on the developer to select a proper means of passing data and increases the security of the language (by inhibiting the manipulation of pointers and directly addressing memory). In addition, though, this level of abstraction hides the details of the technique performed, which can obfuscate a developer's understanding of how data is passed in a program. In this article, we will examine the various techniques used to pass data and deep-dive into the technique that the Java Virtual Machine (JVM) and the Java Programming Language use to pass data, as well as explore some examples that demonstrate in practical terms what these techniques mean for a developer.

The first technique, passing by value, is defined as follows:

Passing by value constitutes copying of data, where changes to the copied value are not reflected in the original value

If we execute this code, we obtain the following output: 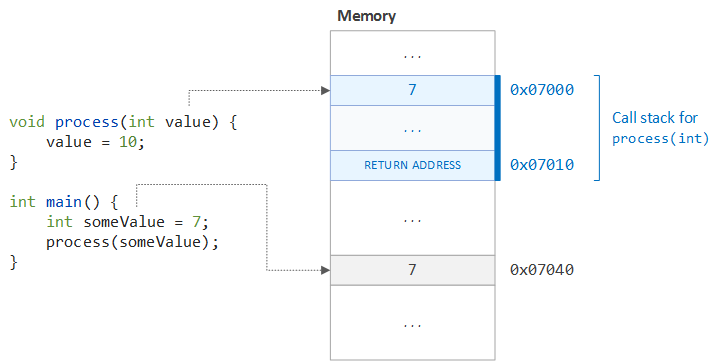 The alternative to passing by value is passing by reference, which is defined as follows:

Passing by reference consitutes the aliasing of data, where changes to the aliased value are reflected in the original value

Unlike passing by value, passing by reference ensures that a change made to a value in a different scope is preserved when that scope is exited. For example, if we pass a single argument into a method by reference, and the method makes an assignment to that value within its body, the assignment is preserved when the method exits. This can be demonstrated using the following snippet of C++ code:

If we run this code, we obtain the following output:

In this example, we can see that when we exit the function, the assignment we made to our argument that was passed by reference was preserved outside of the scope of the function. In the case of C++, we can see that under-the-hood, the compiler has passed a pointer into the function that points to the someValue variable. Thus, when this pointer is dereferenced (as happens during reassignment), we are making a change to the exact location in memory that stores the someValue variable. This principle is demonstrated in the illustrations below:

Unlike in C++, Java does not have a means of explicitly differentiating between pass by reference and pass by value. Instead, the Java Language Specification (Section 4.3) declares that the passing of all data, both object and primitive data, is defined by the following rule:

All data is passed by value

Although this rule may be simple on the surface, it requires some further explanation. In the case of primitive values, the value is simply the actual data associated with the primitive (.e.g 1, 20.7, true, etc.) and the value of the data is copied each time it is passed. For example, if we define an expression such as int x = 7, the variable x holds the literal value of 7. In the case of objects in Java, a more expanded rule is used:

The value associated with an object is actually a pointer, called a reference, to the object in memory

For example, if we define an expression such as Foo foo = new Foo(), the variable foo does not hold the Foo object created, but rather, a pointer value to the created Foo object. The value of this pointer to the object (what the Java specification calls an object reference, or simply reference) is copied each time it is passed. According to the Objects section (Section 4.3.1) of the Java Language Specification, only the following can be performed on an object reference: 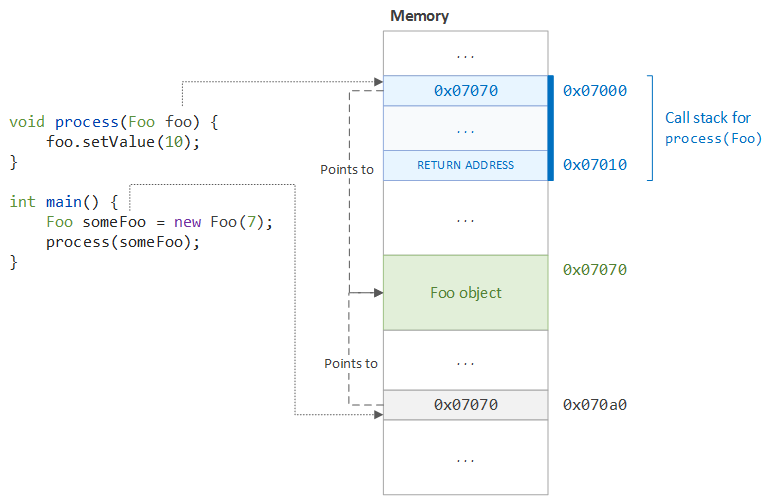 This should not be confused with passing by reference: If the pointer were passed by reference, the variable foo would be an alias to someFoo and changing the object that foo points to would also change the object that someFoo points to. In this case, though, a copied pointer is passed into the function, and thus, the change to the pointer value is lost once the call stack it popped.

While it is crucial to understand the concepts behind passing data in a programming language (Java in particular), many times it is difficult to solidify these theoretical ideas without concrete examples. In this section, we will cover four primary examples:

For each of these examples, we will explore a snippet of code accompanied by print statements that show the value of the primitive or object at each major step in the assignment or the argument-passing process.

If we execute this snippet, we receive the following output:

Similar to making primitive assignments, the arguments for a method are bound by value, and thus, if a change is made to the argument within the scope of the method, the changes are not preserved when the method scope is exited:

If we run this code, we see that the original value of 7 is preserved when the scope of the process method is exited, even though that argument was assigned a value of 50 within the method scope:

While all values, both primitive and object, are passed by value in Java, there are some nuances in passing objects by value that are made explicit when seen in an example. Just as with primitive types, we will explore both assignment and argument binding the following examples.

The variable binding semantics of for objects and primitives are nearly identical, but instead of binding a copy of the primitive value, we bind a copy of the object address. We can see this in action in the following snippet:

The last case we must cover is that of passing an object into a method. In this case, we see that we are able to change the fields associated with the passed in object, but if we try to reassign a value to the argument itself, this reassignment is lost when the method scope is exited.

If we execute this code, we see the following output:

Although there is a large volume of output, if we take each line one at a time, we see that when we make a change to the fields of a Vehicle object passed into a method, the field changes are preserved, but when we try to reassign a new Vehicle object to the argument, the change is not preserved once we leave the scope of the method.

In the former case, the address of the Vehicle created outside the method is copied to the argument of the method, and thus both point to the same Vehicle object. If this pointer is dereferenced (which occurs when the fields of the object are accessed or changed), the same object is changed. In the latter case, when we try to reassign the argument with a new address, the change is lost because the argument is only a copy of the address of the original object, and thus, once the method scope is exited, the copy is lost.

A secondary principle can be formed from this mechanism in Java: Do not reassign arguments passed into a method (codified by Martin Fowler in the refactoring Remove Assignments to Parameters). To ensure that no such reassignment of method arguments is made, the arguments can be marked as final in the method signature. Note that a new local variable can be used instead of the arguments if reassigned is required:

Although fundamental principles such as data binding schemes and data passing schemes can seem abstract in the realm of daily programming, these concepts are essential in avoiding subtle mistakes. Unlike other programming languages (such as C++), Java simplifies its data binding and passing scheme into a single rule: Data is always passed by value. Although this rule can be a harsh restriction, its simplicity, and understanding how to apply this simplicity, can be a major asset when accomplishing a slew of daily tasks.