Join For Free
In a classical model of recommendation system, there are "users" and "items". User has associated metadata (or content) such as age, gender, race and other demographic information. Items also has its metadata such as text description, price, weight ... etc. On top of that, there are interaction (or transaction) between user and items, such as userA download/purchase movieB, userX give a rating 5 to productY ... etc.

Now given all the metadata of user and item, as well as their interaction over time, can we answer the following questions ...


Content-based Approach
In this approach, we make use of the metadata to categorize user and item and then match them at the category level. One example is to recommend jobs to candidates, we can do a IR/text search to match the user's resume with the job descriptions. Another example is to recommend an item that is "similar" to the one that the user has purchased. Similarity is measured according to the item's metadata and various distance function can be used. The goal is to find k nearest neighbors of the item we know the user likes.

Collaborative Filtering Approach
In this approach, we look purely at the interactions between user and item, and use that to perform our recommendation. The interaction data can be represented as a matrix.

The matrix is also extremely sparse, meaning that most of the cells are unfilled. We need to be careful about how we treat these unfilled cells, there are 2 common ways ...

User-based Collaboration Filter
In this model, we do the following

This introduces the concept of user-to-user similarity, which is basically the similarity between 2 row vectors of the user/item matrix. To compute the K nearest neighbor of a particular users. A naive implementation is to compute the "similarity" for all other users and pick the top K.

Different similarity functions can be used. Jaccard distance function is defined as the number of intersections of movies that both users has seen divided by the number of union of movies they both seen. Pearson similarity is first normalizing the user's rating and then compute the cosine distance.

There are two problems with this approach


Location Sensitive Hashing and Minhash
To resolve problem 1, we approximate the similarity using a cheap estimation function, called minhash. The idea is to find a hash function h() such that the probability of h(userX) = h(userY) is proportion to the similarity of userX and userY. And if we can find 100 of h() function, we can just count the number of such function where h(userX) = h(userY) to determine how similar userX is to userY. The idea is depicted as follows ... 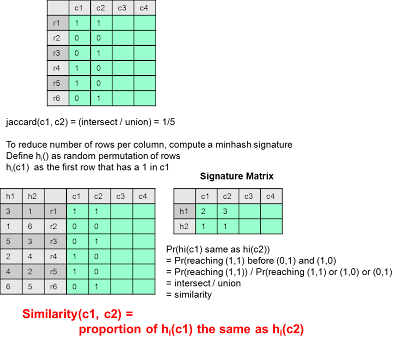 It will be expensive to permute the rows if the number of rows is large. Remember that the purpose of h(c1) is to return row number of the first row that is 1. So we can scan each row of c1 to see if it is 1, if so we apply a function newRowNum = hash(rowNum) to simulate a permutation. Take the minimum of the newRowNum seen so far.

As an optimization, instead of doing one column at a time, we can do it a row at the time, the algorithm is as follows 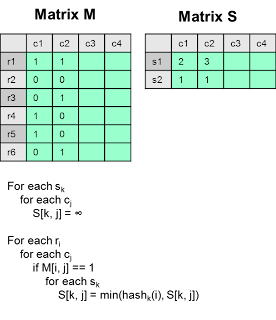 The idea is to horizontally partition the column into b bands, each with r rows. By pick the parameter b and r, we can control the likelihood (function of similarity) that they will fall into the same bucket in at least one band.

Item-based Collaboration Filter
If we transpose the user/item matrix and do the same thing, we can compute the item to item similarity. In this model, we do the following ...

It turns out that computing item-based collaboration filter has more benefit than computing user to user similarity for the following reasons ...

Singular Value Decomposition
If we look back at the matrix, we can see the matrix multiplication is equivalent to mapping an item from the item space to the user space. In other words, if we view each of the existing item as an axis in the user space (notice, each user is a vector of their rating on existing items), then multiplying a new item with the matrix gives the same vector like the user. So we can then compute a dot product with this projected new item with user to determine its similarity. It turns out that this is equivalent to map the user to the item space and compute a dot product there. 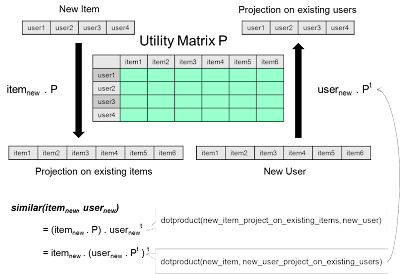 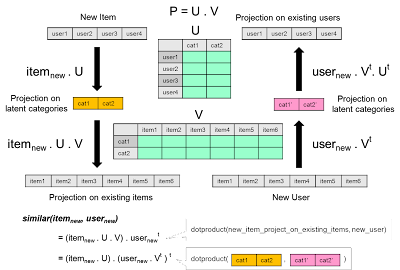 Notice that D can be thought as the strength of each "concept" in the concept space. And the value is order in terms of their magnitude in decreasing order. If we remove some of the weakest concept by making them zero, we reduce the number of non-zero elements in D, which effective generalize the concept space (make them focus in the important concepts).


Calculate SVD decomposition for matrix with large dimensions is expensive. Fortunately, if our goal is to compute an SVD approximation (with k diagonal non-zero value), we can use the random projection mechanism as describer here.

Association Rule Based
In this model, we use the market/basket association rule algorithm to discover rule like ...
{item1, item2} => {item3, item4, item5}

We represent each user as a basket and each viewing as an item (notice that we ignore the rating and use a binary value). After that we use association rule mining algorithm to detect frequent item set and the association rules. Then for each user, we match the user's previous viewing items to the set of rules to determine what other movies should we recommend.

The basic idea is to use separate the data into the training set and the test set. For the test set, we remove certain user-to-movies interaction (change certain cells from 1 to 0) and pretending the user hasn't seen the item. Then we use the training set to train a recommender and then fit the test set (with removed interaction) to the recommender. The performance is measured by how much overlap between the recommended items with the one that we have removed. In other words, a good recommender should be able to recover the set of items that we have removed from the test set.

Leverage tagging information on items
In some cases, items has explicit tags associated with them (we can considered the tags is a user-annotated concept space added to the items). Consider each item is described with a vector of tags. Now user can also be auto-tagged based on the items they have interacted. For example, if userX purchase itemY which is tagged with Z1, and Z2. Then user will increase her tag Z1 and Z2 in her existing tag vector. We can use a time decay mechanism to update the user's tag vector as follows ...

To recommend an item to the user, we simply need to calculate the top k items by computing the dot product (ie: cosine distance) of the user tag vector and the item tag vector.