Regression Testing, by its definition, is a type of software testing to confirm that a recent program or code change has not adversely affected existing features.

It is done to make sure that the existing application is intact with the newly added features and nothing is broken. In order to achieve that, the existing test cases are executed selectively or sometimes completely. Regression testing ensures that the old code still works once the new code changes are done.

Why Is it Required?

Regression testing is carried out in many cases:

Regression testing is also required in cases where the underlying technology is changed or upgraded due to old libraries being deprecated. To ensure that this does not have any impact on functionality, testers perform complete regression testing.

When a developer does code optimization or makes performance fixes, then testers also perform regression testing.

Regression Testing Techniques - Usually testers include regression testing in their test plan for each release. As defined, it should be performed to ensure that new features do not have any impact on existing features, it must be included in each release plan. As most of the organizations follow agile methodology where releases are frequent, regression testing is achieved by continuous testing and automation. There are various techniques of regression testing: 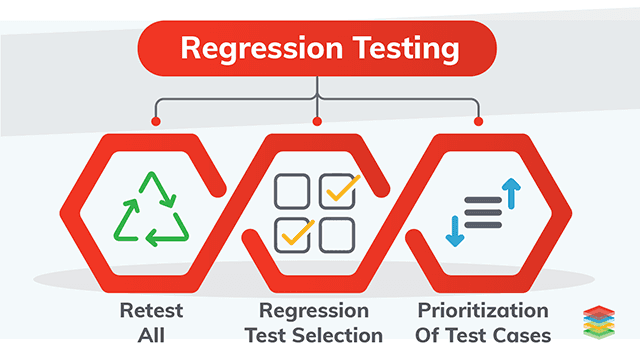 Can Regression Testing Be Done Manually?

Regression testing can be performed manually. But this leads to inefficiency if the application is large and the impact is big. Also, it is very boring to execute repetitive test cases again and again for a test engineer.

To perform regression testing, the tester needs to identify the test cases which must be executed. If the number is big, testers need to find out the best combination and optimize them.

Regression testing Tools - Regression test cases can be automated and executed on a scheduled basis. There are many tools that are reliable and scalable. Let’s have a look some of the most popular tools.