Although the psql backslash commands are easier to use than their associated queries, there are situations when it is important to know the full query behind a particular command. These situations include needing to perform a slightly different/adapted query from that associated with the pre-built command and needing to perform similar queries in scripts or code that are being used as PostgreSQL clients instead of psql. These situations make it important to be able to determine what queries psql is performing and the psql option -E (or --echo-hidden) allow that.

The PostgreSQL psql documentation states that the psql options -E and --echo-hidden "echo the actual queries generated by \d and other backslash commands." The documentation adds commentary on why this is useful. "You can use this to study psql's internal operations." When psql is started with the -E or --echo-hidden options, it will display the query associated with a backslash command before executing that command. The next screen snapshot illustrates this for the \du command used to show roles. 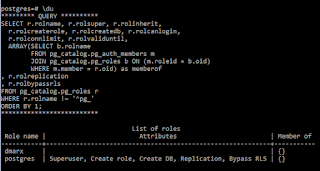 From use of psql -E and execution of the command \du, we're able to see that the query underling \du is this:

Although the query is not nearly as nice to use as \du, we are now able to adapt this query for a related but different use case and are able to run this query from a PostgreSQL client other than psql.