Have you ever faced a notion of “sanity” in the course of software testing? What is it? Why do we need sanity testing? Where did it come from and how is it connected with regression testing?

If you are a project manager or team lead it is important to understand clearly not only how to use the test technique, but also when to apply it. For example, sanity testing is a tool with major benefits, which is comparable to regression testing due to many common peculiarities and the same final purpose. It is the reason why PM should know the differences of each method to involve a test team properly and to provide it with a respective tool not to waste a project time and budget.

Sanity Testing: Its Nature and Tips on Effective Execution

It is a method that examines the product quality to identify its readiness for further tests. This is a branch of regression testing, which examines different areas. The main task is to test the program’s performance after functionality expansion and changes. The main goal is not to detect certain errors, but to analyze the work after fixing already detected errors.

Such testing saves your time by notifying the developers in case of poor product quality. It reduces any extra testing efforts.

It may seem easy at a first sight but sanity testing has its peculiarities, like any other type of testing. QA specialists share with us the lifehacks on how to perform this testing with maximal effectiveness:

What if the modified code affects the entire functioning? What if the failures come with every next amendment?

Here the sanity check comes to save your efforts. I selected the most relevant reasons for you to use this type of testing:

Such testing provides a quick and wide examination to know if further testing is necessary. It checks a certain element or part of the product, which had some defects and was subjected to changes.

Regression or Sanity: Where Is the Difference?

Sanity technique checks the proper work of the product after code amendments. The task is to verify if the modified and adjusted code does not affect the previous product version. The main distinctive feature is a “Test Volume”. Sanity testing scope is more narrow and focused only on a particular functional group or some groups, while regression testing has a wider scope.

It examines all the functionality that may affect the modified code. It aims to capture the errors that may be found. The testers set regression tests and reports problems in the tracking system of defects. The program is ready to be checked regressively as soon as the sanity check is completed. There are some distinguishing features of two described types of tests to know. Let’s compare two types of testing to indicate their features more precisely. 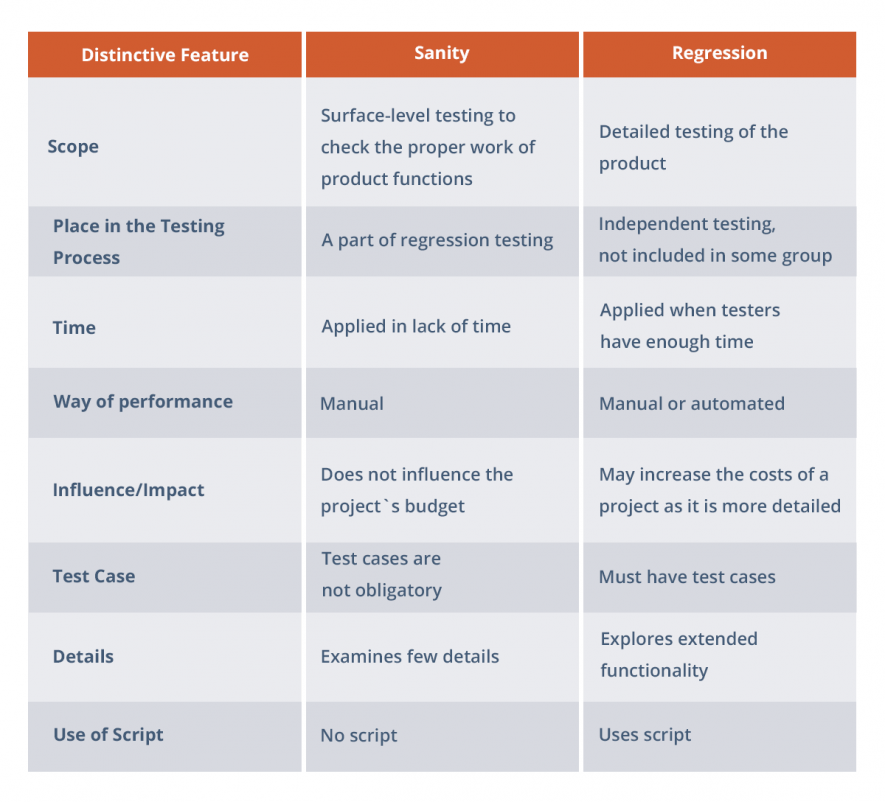 Considering these differences between Sanity and Regression Testing we see that these two types are different mainly in its use, but not in purpose. Сhose the regression check if your team is not limited to strict time frames and deadlines, and apply sanity check in a tight schedule of the project under your control. It is better to have such an option to be flexible in different conditions and divide the duties more reasonably. But the aim is still the same, to check the product after the applied amendments and modifications and prove its proper functioning. It is always necessary to test this attentively.