Transparent Data Encryption (TDE) is a technology used to encrypt databases by offering encryption at a file level. If you have critical and sensitive data, TDE can help protect the privacy of your information and prevent data breaches by enabling data-at-rest encryption in the database. TDE helps you meet various regulatory requirements including PCI DSS and HIPAA.

According to MySQL, "TDE enables data-at-rest encryption by encrypting the physical files of the database. Data has encrypted automatically, in real time, prior to writing to storage and decrypted when read from storage. As a result, hackers and malicious users are unable to read sensitive data from tablespace files, database backups or disks. RDS TDE uses industry standard AES algorithms."

Transparent Data Encryption (TDE) can be used to perform real-time I/O encryption and decryption on instance data files. To increase data security, you can enable TDE to encrypt instance data. Data is encrypted before it is written to disk and decrypted when it is read from disk. TDE does not:

Note: TDE is currently only applicable to SQL Server 2008 R2 and MySQL 5.6. To view or modify TDE settings, you need to log in with an Alibaba Cloud account rather than a RAM account.

Setting Up TDE on ApsaraDB for RDS

To enable TDE on Alibaba Cloud: 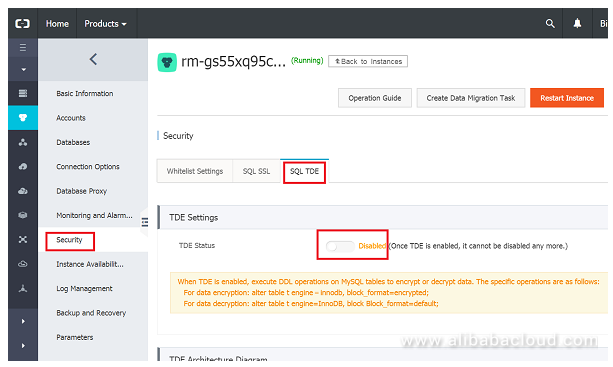 How Does TDE Work?

TDE works as shown below.

Log in to the database and execute the following command to encrypt the table to be encrypted.

If you want to decrypt the TDE encrypted table, execute the following command.

To summarize, database encryption provides an important layer of security to your sensitive data. There are different ways to encrypt the data that are all very practical. But remember that even the best crypto library will not secure your data unless you are using a secure key management infrastructure.

Currently, only SQL Server 2008 R2 and MySQL 5.6 databases support TDE, and once TDE is activated, it cannot be deactivated.

Encryption uses keys produced and managed by the Key Management Service (KMS). RDS does not provide the keys and certificates needed for encryption. After activating TDE, if the user wants to restore the data to the local device, he must use RDS to decrypt the data first.