In previous posts we explored why Prometheus and Kubernetes are a perfect match but what about other orchestrators?  In this post, we discuss how to set up application and infrastructure monitoring for Docker Swarm with Prometheus and Weave Cloud and cover blackbox monitoring of Docker EE and CE versions of Swarm.

Swarmprom is composed of two stacks: the first is a starter kit that allows you to experiment with the self-hosting of a fully-fledged monitoring stack made of  Prometheus, Grafana, cAdvisor, Node Exporter, Alert Manager, and Unsee.  The second stack is a trimmed down version of the first one, that comes with Weave Scope and Weave Cloud Prometheus-as-a-service integrations.

The Docker team plans to integrate Prometheus by exposing Docker engine and container metrics in the Moby project.  This feature is under development and you can track its progress under "metrics: prometheus integration road map".

Clone the swarmprom repository and run the monitoring stack:

Navigate to http://<swarm-ip>:3000 and login with user admin password admin. You can change the credentials in the compose file or by supplying the ADMIN_USER and ADMIN_PASSWORD environment variables at stack deploy.

Swarmprom Grafana is preconfigured with three dashboards and Prometheus as the default data source:

After you log in, click on the home drop down from the upper left-hand corner where you'll see the dashboards. 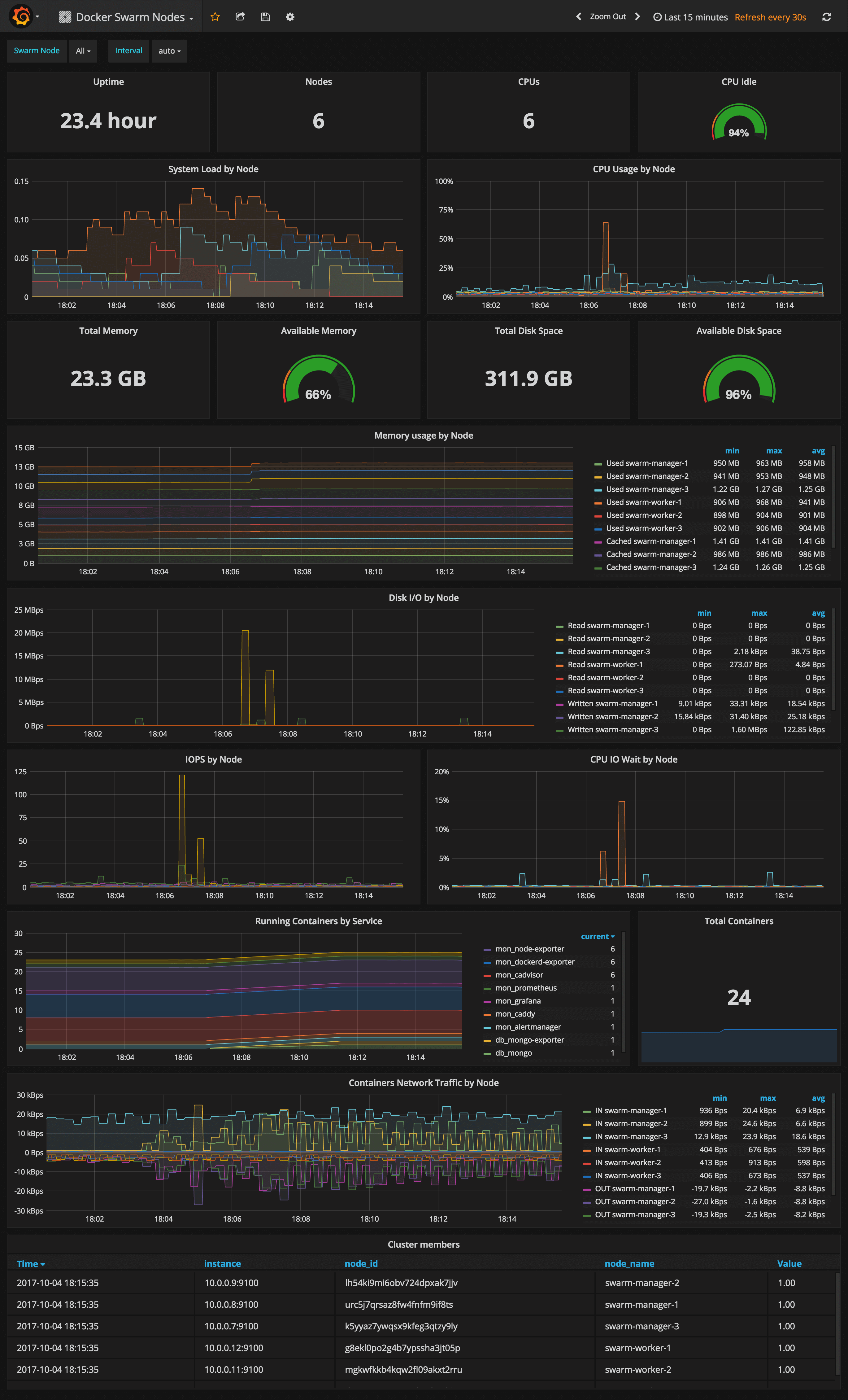 This dashboard shows key metrics for monitoring the resource usage of your Swarm nodes and can be filtered by node ID:

This dashboard shows key metrics for monitoring the resource usage of your Swarm stacks and services, it can be filtered by node ID: 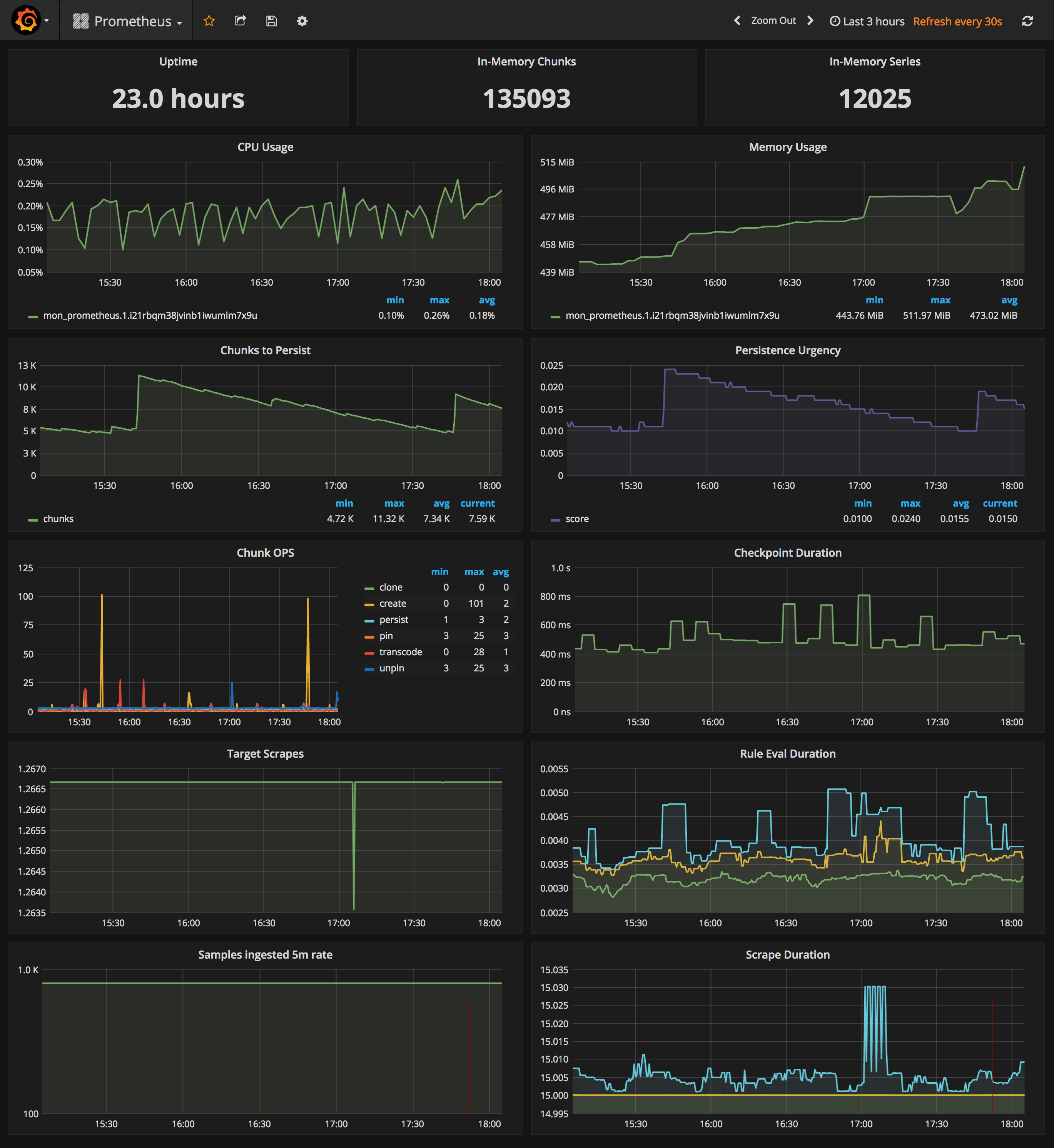 In order to collect metrics from Swarm nodes, deploy the exporters on each server. The use of global services means not having to manually deploy the exporters. When you scale up your cluster, Swarm launches a cAdvisor, node-exporter and dockerd-exporter instance on the newly created nodes. All you need is an automated way for Prometheus to reach these instances. Running Prometheus on the same overlay network as the exporter services allows you to use the DNS service discovery. Using the exporters service name, you can configure DNS discovery:

When Prometheus runs the DNS lookup, Docker Swarm returns a list of IPs for each task. By using these IPs, Prometheus bypasses the Swarm load-balancer and then scrapes each exporter instance. The problem with this approach is that you will not be able to tell which exporter runs on which node. Your Swarm nodes' real IPs are different from the exporters IPs since exporters IPs are dynamically assigned by Docker and are part of the overlay network. Swarm doesn't provide any records for the tasks DNS, besides the overlay IP. If Swarm provides SRV records with the nodes hostname or IP, you can re-label the source and overwrite the overlay IP with the real IP.

Finding the Host Running the Node-Exporter

The node ID value is supplied via {{.Node.ID}} and the node name is extracted from the /etc/hostname file that is mounted inside the node-exporter container.

Using the textfile command, you can instruct node-exporter to collect the node_meta metric. Now that you have a metric containing the Docker Swarm node ID and name, you can use it in promql queries. Let's say you want to find the available memory on each node, normally you would write something like this:

The above result is not very helpful since you can't tell what Swarm node is behind the instance IP. So let's write that query taking into account the node_meta metric:

This is much better. Instead of overlay IPs  I can now see the actual Docker Swarm nodes ID and hostname. Knowing the hostname of your nodes is useful for alerting as well. You can define an alert notifying you when available memory reaches 10%. You also will receive the hostname in the alert message and not some overlay IP that you can't correlate to a infrastructure item.

Maybe you are wondering why you need the node ID if you have the hostname? The node ID will help you match node-exporter instances to cAdvisor instances. All metrics exported by cAdvisor have a label named container_label_com_docker_swarm_node_id, and this label can be used to filter containers metrics by Swarm nodes.

Finding the Number of Containers on a Swarm Node

Let's write a query to find out how many containers are running on a Swarm node. Knowing from the node_meta metric all the nodes IDs you can define a filter with them in Grafana. Assuming the filter is $node_id the container count query should look like this:

Another use case for node ID is filtering the metrics provided by the Docker engine daemon. Docker engine doesn't have a label with the node ID attached on every metric, but there is a swarm_node_info metric that has this label.  If you want to find out the number of failed health checks on a Swarm node you would write a query as follows:

For now the engine metrics are still experimental. If you want to use dockerd-exporter you have to enable the experimental feature and set the metrics address to 0.0.0.0:9323. If you are running Docker with systemd create or edit /etc/systemd/system/docker.service.d/docker.conf file like so:

Apply the config changes with systemctl daemon-reload && systemctl restart docker and check if the docker_gwbridge ip address is 172.18.0.1:

Replace 172.18.0.1 with your docker_gwbridge address in the compose file:

Collecting Docker Swarm metrics with Prometheus is not a smooth process, and because of group_left queries, it tends to become more complex. In the future I hope the Swarm DNS will contain the SRV record for the hostname and Docker engine metrics will expose container metrics replacing cAdvisor all together.

I've set the Prometheus retention period to 24h and the heap size to 1GB, you can change these values in the compose file.

Set the heap size to a maximum of 50% of the total physical memory. When using host volumes, you should ensure that Prometheus doesn't get scheduled on different nodes. You can pin the Prometheus service on a specific host with placement constraints.

The Prometheus swarmprom comes with the following alert rules:

Alerts when a node CPU usage goes over 80% for five minutes.

Alerts when a node memory usage goes over 80% for five minutes.

Alerts when a node storage usage goes over 85% for five minutes.

Alerts when a node storage is going to remain out of free space in six hours.

You can add alerts to swarm_node and swarm_task files and rerun stack deploy to update them. Because these files are mounted inside the Prometheus container at run time as Docker configs you don't have to bundle them with the image. The Alertmanager swarmprom image is configured with the Slack receiver. In order to receive alerts on Slack you have to provide the Slack API url, username, and channel via environment variables:

You can install the stress package with apt and test out the CPU alert, you should receive something like this:

Cloudflare has made a great dashboard for managing alerts. Unsee can aggregate alerts from multiple Alertmanager instances, running either in HA mode or separate. You can access unsee at http://<swarm-ip>:9094 using the admin user/password set via compose up:

The swarmprom project is meant as a starting point in developing your own monitoring solution. Before running this in production you should consider building and publishing your own Prometheus, node exporter and alert manager images. Docker Swarm doesn't play well with locally built images, the first step would be to set up a secure Docker registry that your Swarm has access to and push the images there. Your CI system should assign version tags to each image. Don't rely on the latest tag for continuous deployments, Prometheus will soon reach v2 and the data store will not be backwards compatible with v1.x.

Another thing you should consider is having redundancy for Prometheus and alert manager. You could run them as a service with two replicas pinned on different nodes, or even better, use a service like Weave Cloud Cortex to ship your metrics outside of your current setup. You can use Weave Cloud not only as a backup of your metrics database but you can also define alerts and use it as a data source four your Grafana dashboards. Having the alerting and monitoring system hosted on a different platform, other than your production, is a good practice that will allow you to react quickly and efficiently when a major disaster strikes.

Swarmprom comes with built-in Weave Cloud integration, what you need to do is run the weave-compose stack with your Weave service token:

This will deploy Weave Scope and Prometheus with Weave Cortex as remote write. The local retention is set to 24h so even if your internet connection drops you'll not lose data as Prometheus will retry pushing data to Weave Cloud when the connection is up again. You can define alerts and notifications routes in Weave Cloud in the same way you would do with alert manager. To use Grafana with Weave Cloud you need to reconfigure the Prometheus data source like this: 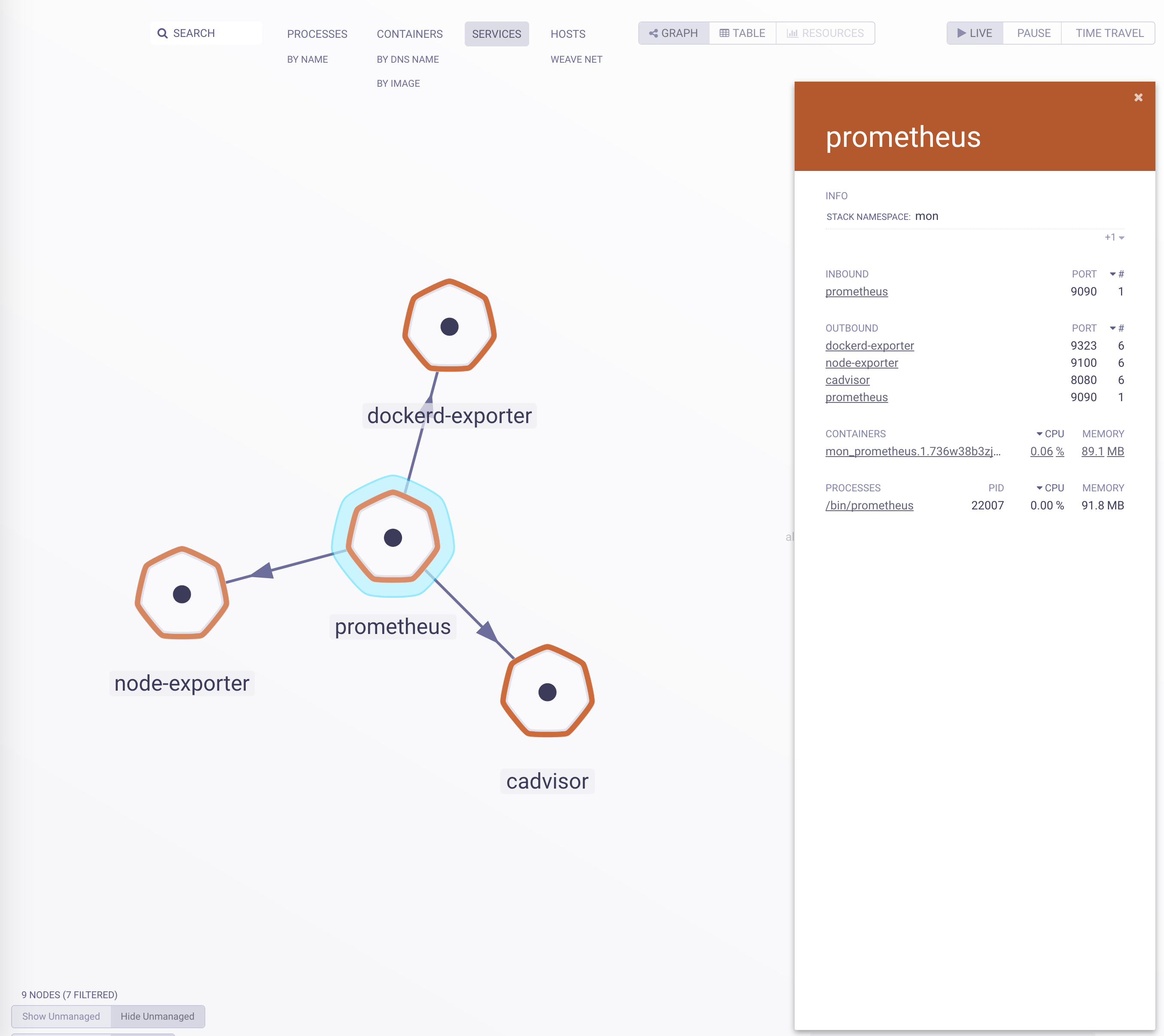 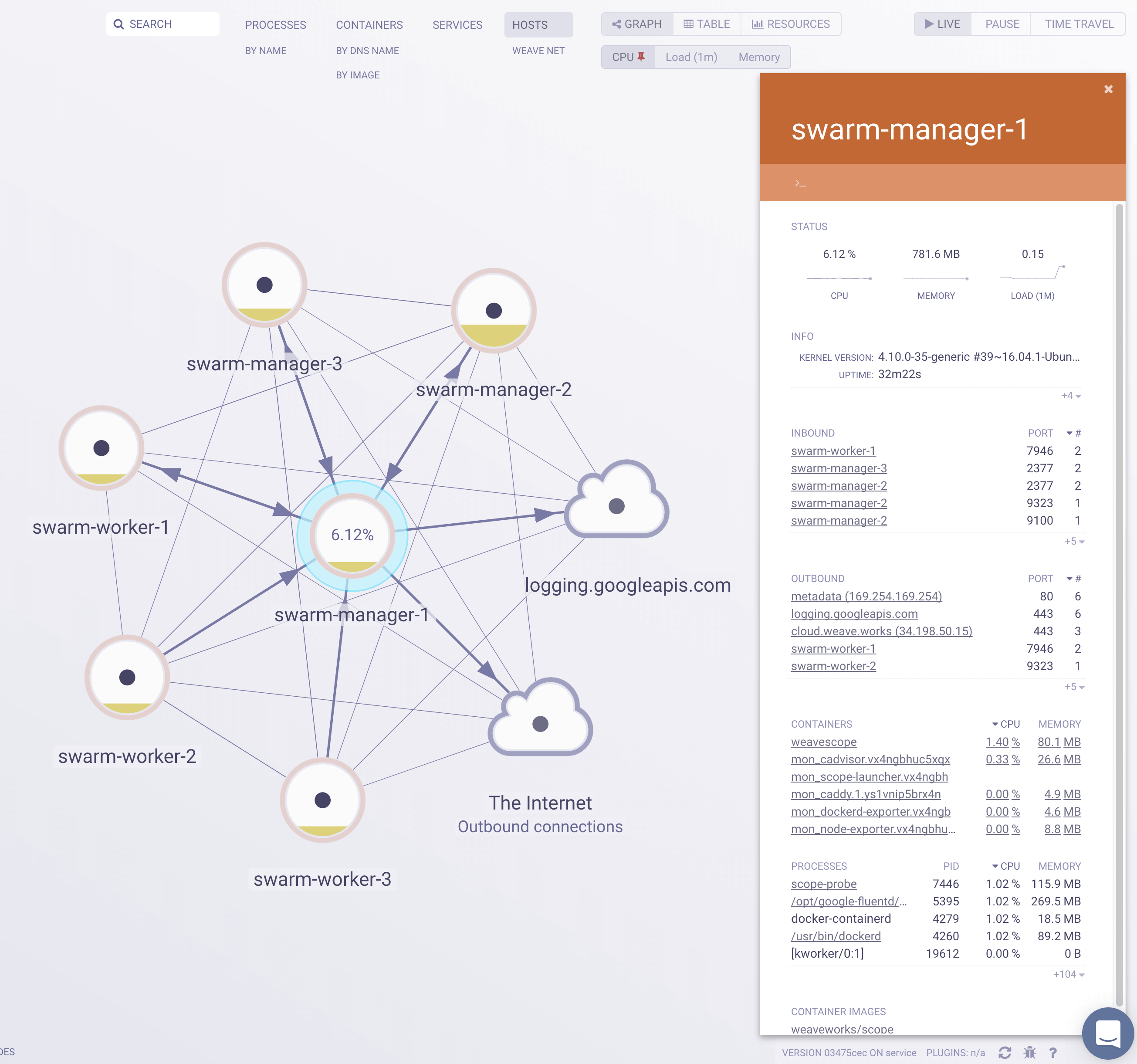 Weave Cloud automatically generates a map of your application, enabling you to intuitively understand, monitor, and control your microservices based application. You can view metrics, tags and metadata of the running processes, containers and hosts. Scope offers remote access to the Swarm’s nods and containers, making it easy to diagnose issues in real-time.

In this post, we covered the "blackbox" monitoring of Docker EE and CE versions of Swarm using Prometheus Monitoring with Weave Cloud. In future posts, we will also cover the white box monitoring and automatic discovery of services.