Not so many backend (and application in general) developers are watching the development of Linux kernel. But those who do notice the appearance and rapid development of io_uring. For those who are not aware of what it is, I'll provide a brief introduction below. But the main topic of this post is not the io_uring itself. Instead, I want to show you that we are watching the beginning of the real revolution in backend development.

I/O Anatomy of the Backend

As I've explained in the article dedicated to Data Dependency Graph, each backend application at a very high level has only three parts - set of inputs, set of outputs, and set of transformations from inputs to outputs. 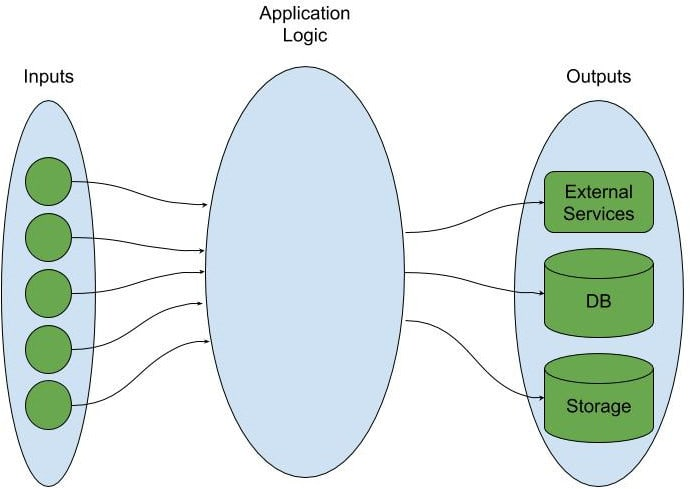 This is a rather logical view since it presents the logical meaning of inputs and outputs from the point of view of the architecture of the application. In other words, it preserves inputs and outputs as we see them while designing and implementing the application. Nevertheless, if we look at the same application from the low level I/O perspective, we quickly realize that every input, output, or internal communication (calls to other services located outside our application) consists of both, input and output. How does this happen?

Let's take a look at it. For example, the REST entry point receives the request from the client (input part), processes it, and sends a response (output part). The same is true for every other point where we are interacting with the world outside the application.

Let's try to draw a diagram with I/O which happens during the processing of a request of the very simple REST entry point. This entry point prepares arguments from the incoming requests, calls external service, formats responses, and sends it back. All I/O inputs (i.e. where data received) I'll keep pointing to left and all I/O outputs (i.e. where data sent) will point to right:

Vertical lines depict the interaction between application and external world, i.e. I/O operations.
Now let's ignore for the moment that all steps in this diagram logically belong to the same request and focus only on the I/O:

While in this very simple example we have only one input for every transformation, in more complex cases outputs may depend on more than one input. Also, usually, there is some kind of context which is passed across all transformations related to the same logical processing pipeline. For example, in the REST application, there are request and response contexts (often combined into one) which form the context passed through all processing steps of the same entry point.

I want to emphasize: all backend applications have an identical structure shown above. The internal architecture and software stack used for implementation is irrelevant. Old-fashioned Java monolith and fancy serverless functions have the same structure from point of view of I/O.

The synchronization part is one of two types - All and Any. The article dedicated to Data Dependency Graph explains these in more detail.

The last item appears in traditional synchronous applications when they create and maintain a large number of threads, the vast majority of which just waits for the I/O.

OK, how about Input and Output? Well, they have their own (big) set of issues. First of all, the vast majority of traditional APIs provided by operating systems are synchronous. There are some exceptions but they cover only subsets of necessary functionality (usually network). The next issue is that every I/O operation means context switch. We prepare parameters and perform the call to the operating system (OS). At this point OS needs to save the whole context, switch to internal OS stack, copy (if necessary) data between user space and kernel space, perform requested operation, and upon completion perform the same steps in reverse order. Besides that, every context switch is a huge stress to CPU pipelines which heavily impacts performance.

Let's summarize: how the application looks and behaves from the point of view of I/O is completely different from how we ought to implement our applications.

New Era of I/O With io_uring

The io_uring is a completely new approach to I/O API.

First of all, the API is consistent across all types of I/O. Network and file I/O handled consistently.

Next, the API is asynchronous. The application submits requests and then is notified when the request is completed. This API naturally implements the so-called Proactor pattern. While far less famous than the Reactor pattern, Proactor is a better fit for pure asynchronous API.

The io_uring API uses two ring buffers for communication between application and kernel (hence the API name) and designed in a way that enables natural batching of requests and responses. Besides other consequences (see below), this means that number of context switches is significantly reduced. There is no correspondence One I/O = One syscall = Two context switches anymore.

Finally, io_uring can be configured (although this requires root privileges) to perform I/O without calling OS at all (to be precise - don't call OS as long as there is a stable stream of I/O operations).

There are several other useful features, for example, it's possible to pre-configure memory buffers for I/O so they will be directly accessible for application and kernel, so it is possible to perform I/O without copying any data (nor even remapping memory).

Well, there are no ideal applications. Nevertheless, I propose to call Ideal Backend Application any backend application which can saturate Input at given hardware (i.e. reach hardware+OS limits). This is not so easy to achieve. In fact, before io_uring was introduced, it was almost impossible for a traditional user-level application to reach I/O limits.

Now, with io_uring this is possible, but why this is important and why such an application is ideal?

The main property of such an application: it's impossible to overload it!
The whole range of loads, from zero to saturated Input is a normal operating range for such an application. Just imagine no performance degradation, no excessive memory (or other resources) consumption, and no relevant failures. Such an application is always stable and reliable, its ideal from maintenance and support points of view.

Are We Ready for This Revolution?

Well, we definitely have close to zero support for io_uring in popular stacks used for backend. Unfortunately, many of them are not designed to accommodate such an I/O model easily. Worse is that many frameworks support or promote a synchronous processing model. Adding io_uring support in such frameworks will provide no sensible benefits.

The good news is that virtually any stack which uses a promise-based asynchronous processing model will get a significant performance boost since this model is very close to io_uring API and how the application looks from the point of view of I/O.

We're facing revolutionary change in the backend development. And to get the most benefits from this change we need to adopt asynchronous processing and at least some functional programming approaches. This combination provides minimal "abstraction overhead" and allows us to get the most out of the hardware. Some software stacks are already adopted this model (for example, Node and Deno) and show quite good performance despite far from the best possible performance of JS and single-threaded design.

Published at DZone with permission of Sergiy Yevtushenko . See the original article here.