The API focuses on full standardization (not depending on proprietary server config) and recognizing the use case to configure security from within an application archive. The latter is specifically useful for cloud deployments, where lightweight and self-sufficient war archives can be deployed to generic Jakarta EE compatible containers.

Soteria was designed with the usage of standard APIs in mind and the ability to run on different servers. Any functionality Soteria requires that isn't available in standard APIs is delegated to an SPI with a default implementation covering a series of well-known servers. This SPI is internal in Soteria 1.0.x, but it will be made public in Soteria 1.1.

Because Jakarta Security is very much based on Jakarta EE, a valid question to ask is: does it also run on Tomcat? The answer is yes, but with some caveats.

Jakarta Security depends on Servlet (with the Servlet Container Profile JASPIC extensions), Expression Language and CDI. Soteria additionally depends on JACC, but this is abstracted via its SPI: 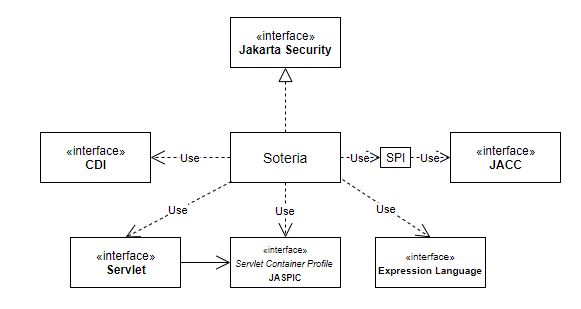 Tomcat obviously already implements Servlet (with the Servlet Container Profile JASPIC extensions), but it also implements Expression Language. To start getting it to run we first need to add CDI to Tomcat. This basically entails adding a CDI implementation, where Weld is quite easy to use by adding the following to pom.xml in a Maven project:

Subsequently, we also need to register the CDI bean manager in JNDI by adding a META-INF/context.xml file with the following contents:

Next, we'll add the Soteria implementation:

We don't necessarily have to include the respective API dependencies (CDI and Jakarta Security), as they are referenced by the implementations, and therefore, automatically fetched by Maven.

The above should be enough to get things running. (We'll come to the JACC dependency later.) We should look out for the path of the bean manager. Occasionally, the bean manager will get stored under "java:comp/env/BeanManager" instead of its normal path: "java:comp/BeanManager". This is a rather well-known trap, and many projects have adjusted for this, but Soteria hasn't yet. Soteria 1.1 will certainly include a fix for this.

In the meantime, what we can do is using a handy trick in Servlet, where we can override classes coming from embedded jars (jars in WEB-INF/lib). To do this, we copy the CdiUtils.java file from the Soteria source to a package with the same name in our project. Then, in that file, we change the getBeanManager() method to:

With this all in place we can now code up a simple protected Servlet, using the provided BASIC authentication mechanism:

Something which can't really be done with plain Servlets and only in a fairly obscure way with the Servlet Container Profile JASPIC extensions on Tomcat is defining the database within the application which is used to validate the credentials and return groups (which map one-to-one to roles by default). With Jakarta Security this is trivial:

Running this on Tomcat, we see the various bits and pieces being initialized and picked up in the server log:

Deploying and running this on Tomcat will present us with a well-known browser authentication dialog. If everything went right, we get the following output: 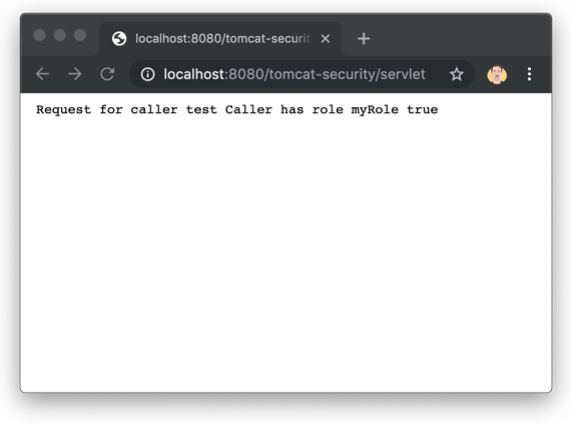 A fully working example is available in the Vendor EE Samples project.

For this tutorial, we'll be looking at Payara MP JWT.  Payara MP JWT, however, is currently not published on Maven central although it can be built from source by cloning and building it using mvn clean install. MP JWT  does have its own additional dependencies, which in terms of APIs are JSON-P and  MP Config. For Tomcat, we have to add implementations for those as well, and we'll do that by adding SmallRye Config and the GlassFish JSON-P implementation. This will make the dependencies we list in our pom.xml quite a bit longer; the implementations actually depend on the APIs, so we don't really need to list them (since Maven will fetch transitive dependencies). Our pom dependency section will then look as follows: 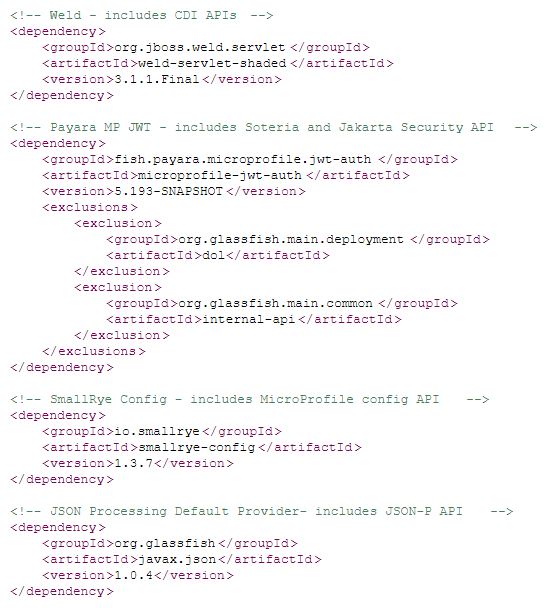 With this in place, we can start using MP JWT on Tomcat. As an example application, we will modify an existing MicroProfile sample to make it Tomcat compatible. Without repeating all the existing MP JWT tutorials here, in short using MP JWT means setting the authentication mechanism by placing the @LoginConfig annotation somewhere, and then configuring a public key inside the application that will be used to verify incoming JWT tokens. For the request we sign a JWT token with the corresponding private key and include it in an "authorization" header, for instance using wget:

If everything went as planned, we will then get the following response:

This is a protected servlet

As we can see, this indeed works on Tomcat, attesting to the already quite modular nature of Jakarta EE and MicroProfile implementation components.

A fully working example is again available in the Vendor EE Samples project.

Coming back to the missing JACC dependency, which we mentioned at the start of this article: it's used by Soteria to implement the Jakarta Security SecurityContext. Since JACC is mostly about exposing something that a Servlet container does in a standard way (essentially an index of security constraints), you can't really have a standalone implementation of it. The closest would be to manually parse web.xml and manually scan for the associated security annotations, build our own index, and implement the same resolving algorithm as Servlet containers are implementing. OmniFaces takes this approach for its WebXml class, but it's not ideal. The best solution would be for Tomcat to implement the Servlet extensions for JACC, for which some mild interest was shown before. Finally, the upcoming public Soteria SPI could be taken advantage of to use Tomcat's native APIs directly to access its internal security constraints.

With all of this not available for Tomcat there's no alternative at the moment, so we can't use the SecurityContext. Everything else works though.

To use Jakarta Security on the Payara Platform, nothing special is needed. It’s just there and ready to go-  just like the Servlet API is just “there”, for example.

This means any book, tutorial, or example on Jakarta Security can be followed, and nothing Payara-specific has to be done by the user. The following are small examples of using Jakarta Security:

Published at DZone with permission of Arjan Tijms. See the original article here.