Dealing with slow database performance? One potential cause of this problem is database contention.

Even if you’re not struggling with a slow database right now, database contention is important to understand. The contention monster often doesn’t rear its ugly head until an application has reached significant scale. It’s best to be prepared, so in this article, we’re going to look at both how to avoid contention issues and how to diagnose and resolve them when they do arise.

But first, we have to understand what they are.

What Is Database Contention?

To understand why that can cause problems, we need to take a quick detour into a couple of important concepts that relate to how databases handle transactions.

Processing transactions requires precision. ACID is an acronym that stands for Atomicity, Consistency, Isolation, and Durability — four properties that allow us to guarantee the validity of data in a database even in the event of errors, machine crashes, etc. Specifically, transactions must have:

Digging a bit deeper into isolation, the standards for SQL spell out four isolation levels that govern different approaches to how transactions can interact with data in the database and with each other. In this article, we’ll focus on serializable isolation, which is the strongest isolation level and the only one that completely ensures data integrity. Serializable isolation allows transactions to process concurrently but affect the database as if they had occurred one-by-one.

To illustrate this, let’s imagine a simplified example: two transactions, all acting on the same bank account, and thus both trying to update the same row in our database:

If both of these transactions come in at almost the same time (but in the order they’re listed), they would be processed by the database in the manner illustrated in the table below. (Remember: because of isolation, each transaction processes independently and can’t see what’s happening with the other transactions until the results are committed.) 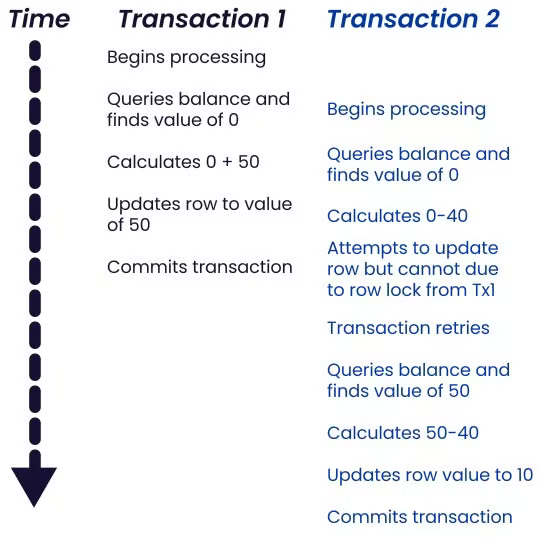 While this is a simplified example, it illustrates how delays can emerge when lots of transactions are trying to act on the same data at the same time.

Let’s look at a more realistic scenario to further illustrate how contention happens:

Example: Imagine we’ve built a video streaming site. In our database, we have a table called videos with a column called views, and each time a video is viewed, a transaction is sent to the database to add 1 to the value for that video in videos.views.

When traffic is low, this system would work fine. But what happens if a video goes viral or hosts some kind of “premiere” event that generates many new views at the same time? Contention issues are likely to emerge, as each video view is generating a new transaction that’s trying to access the same row of videos.views, but only one transaction can act on that data at a time.

Now that we understand what contention is, how can we tell when it’s happening? Unfortunately, it’s difficult to give a general answer to this question, as it varies significantly based on the database system you’re using. Here, we’ll take a look at several ways to diagnose contention when using CockroachDB specifically — you may find that similar approaches apply to other databases, as well.

Checking performance and error messages. If you’re noticing a decrease in your application’s performance and frequent errors such as SQLSTATE: 40001, RETRY_WRITE_TOO_OLD, and RETRY_SERIALIZABLE, these are signs that you likely have a contention issue.

Querying internal tables to find contention. CockroachDB itself tracks contention problems, and you can access this information by querying the relevant tables in crdb_internal(there are tables for contended indexes and contended tables.

To find contended indexes and tables, use the relevant query from the code snippet below (remembering to replace yourdb with the name of the database you’re using):

Again, the answer to these questions will vary somewhat depending on your database technology of choice. Here, we’ll present some of the recommended solutions for CockroachDB users: