The testing that is done to verify the interface functionality is called Interface testing. It is also defined as a software testing type that verifies whether the communication between two different software systems is done correctly. 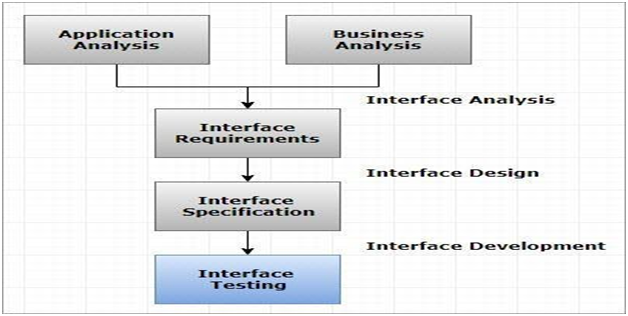 When and Why Should We Test an Interface?

The 3 Phases of Interface Testing in an Interface Life-Cycle

When the interface is configured, and once the development starts, configurations need to be verified as per the requirement.

In this process the interface needs to be validated and verified, this can be done as a part of unit testing also.

The maintenance process starts once the whole software is ready, deployed, and working, then the interface needs to be monitored for its performance and any new issues introduced due to the changes made or deteriorating performance.

We need to make sure that we are not introducing any defects in our code and hence tests need to be run on the interface to verify that adding new code is not injecting any new defects before start developing an interface. It helps you to determine whether the interface is defect-free and as per the requirement.

After being satisfied with the interface, we validate it for the intended workflow, data, etc. We will run performance huge data tests and check how well the interface responds that will save a lot of time that will be spent on fixing the defects later.

Interface testing is basically done on the messaging layer of the system architecture and during Interface Testing various types of testing done on the interface may include.

Unit Testing: We Test the functionality of each individual operation (in a function).

Workflow Testing: It is done to make sure that the interface engine handles the workflow well and handles your workflow as expected.

Individual Systems: This testing is done to verify the individuality of each system such as the billing system and inventory management system should be able to operate individually.

Interface testing becomes more important when we verify the application’s dependencies with other apps just like any other testing. It is equally important as it ensures seamless functioning, performance, and various data-driven applications and systems, by verifying the communication between the database, networks, and systems.

Define all such answers will help you to understand the requirement, find out tricky points of the application and then create the test cases accordingly. If QA’s miss this, and later on this leads to confusion about the requirement or incorrect testing.

Now we understand the requirement very well we need to finalize the output that we will be expecting from the tests. It is not just a Pass or Fail, it can be some data, a call to another API, etc. It is not only tricky but also risky to measure the outcome of the expected result.

Through interface testing, we can’t directly move on to creating big test cases, creating small test cases or calls is relatively simple. First, create a small test code and verify if the output is as expected or not.

It is boring to write codes for testing an interface. You are not spending time in writing the code but along with this, you will also have to spend time to understand the format, style, the coding language used for development, and then as icing on the cake you will have to make sure that your code isn’t creating a problem to the app or system code. You need to research and find some automation tools which will save your day.

5) Define the Start and Stop Points

Before starting the execution of a test, we need to decide the start (entry) and the stop (exit) point of the test, as well as decide how the entire testing process will start and end. Similarly, we also need to measure the performance level of the Interface testing as well.

The best method to perform interface testing is to use automation and include the interface testing in your automation plan. Hence the following list of the tools that will help you to complete your interface testing as quickly as possible. However, I would personally recommend using SoapUI for web services testing but every requirement is different hence let us take a look at the 5 best tools.

REST – Assured is the most preferred tool for people working with Java. It is the best tool for API testing with Java which can easily integrate with any Java-based framework.

A postman is a good option for automation who don’t like to use the same coding language as the IDE. It has a native version available that can be used for Mac, Linux, and Windows.

SoapUI can be a great choice if your team is doing only API testing. SoapUI is a complete functional testing tool devoted to API testing which supports Data-driven testing where the data can be passed in CSV or excel format.

JMeter is widely used for load testing and it can be used for interface testing too which has record & playback support and it generates HTML reports which are easy to read and understand. It is also compatible with CSV files that allow you to create unique parameters for testing.

Published at DZone with permission of Kamal Singh. See the original article here.