Enterprise JavaBeans (EJB) is a platform for building portable, reusable, and scalable business applications using the Java programming language. Since its initial incarnation, EJB has been touted as a component model or framework that lets you build enterprise Java applications without having to reinvent services such as transactions, security, and automated persistence for building an application.

EJB 3 greatly simplifies development by adopting a POJO programming model. As shown in the following figure an annotation transforms a simple POJO to an EJB.

EJB 3 not only simplifies development of session and message driven beans but it also radically simplifies the persistence model by implementing a simplified Object-Relational Mapping approach similar to Oracle TopLink and JBoss Hibernate as a part of the Java Persistence API. Note that JPA replaces EJB 2 CMP Entity beans in the EJB 3 spec, while being available outside of the Java EE container.

Following is an example of a simple EJB 3 Stateless session bean.

With EJB 3, dependency injection has greatly simplified accessing both EJB resources"such as JDBC DataSource, JMS Objects, and JPA Entity Manager"and services"such as Timer, User Transaction, and Web Services. You will find this Refcard useful when building enterprise Java applications with EJB 3 and JPA. It lists all metadata annotations, describes them and provides examples. It also provides descriptions for XML elements that you can use for injection.

Dependency injection allows you to simply declare component dependencies and let the EJB container deal with the complexities of instantiating, initializing, and sequencing resources and supplying service or resource references to clients as required. Development frameworks like Spring framework originally popularized dependency injection. 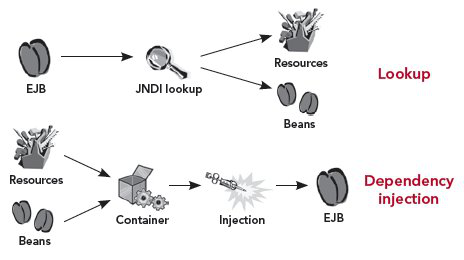 Note that annotations and descriptors are not mutually exclusive. In fact, you can use both together. Deployment descriptor entries override configuration values specified using metadata annotations.

You can use either metadata annotations or XML descriptors to use dependency injection.

Refer to the following Java EE 5 specifications and XML schema for more information on dependency injection.

Common Annotations for the Java Platform:

Dependency injection is supported only on managed classes and not on regular POJO.

Dependency injection is supported only on managed classes such as Session Beans or Interceptors and not on regular POJO. Hence you cannot use injection on helper classes.

The following table depicts what type of managed classes can inject what objects.

The following annotations can be used in a field or a setter method for dependency injection. However, these annotations may also be applied at the class level for defining dependencies and then used with JNDI look up.

The following table shows attributes for the @Resource annotation.

You can inject a resource at the field or setter method level.

Although setter injection might seem like a little more work, it provides a couple of distinct advantages. First, it is easier to unit-test by invoking the public setter method from a testing framework like JUnit. Second, it is easier to put initialization code in the setter if you need it.

EJB 3 allows you to explicitly specify a global JNDI name using the mappedName parameter of the @Resource annotation. For example, if you"re using the Oracle Application Server and you have a data source with a global JNDI name of jdbc/OracleDS, you can specify the resource mapping as follows:

If you are using deployment descriptor (ejb-jar.xml) instead of annotations, then you must use resource-ref, resource-env-ref or env-entry XML elements to define dependencies.

The resource-env-ref is used to specify references to JMS destination resources such as a Queue or Topic.

The env-entry defines environment entries for an EJB.

The injection-target defines the name of a class and a name (field or property) within that class into which a resource, EJB, or entity manager should be injected as we saw in the above examples.

Injects a session bean reference into a field or method.

Used to specify a dependency on the local interface of a session bean.

Used to specify a dependency on the remote interface of a session bean.

The JPA EntityManager is the bridge between the OO and relational worlds as depicted in the following figure.

You can inject a container-managed EntityManager (either transaction scoped or extended) using @javax.persistence.PersistenceContext annotation.

The following table defines the parameters/attributes of this annotation.

You can inject a transaction scoped EntityManager as follows:

An extended scoped EntityManager can only used in a stateful session bean as in the following example:

The persistence-context-ref is similar to @PersistenceContext; it defines references to a container-managed entity manager.

The persistence-unit-ref is similar to @PersistenceUnit that is used to define references to a persistence unit (i.e., entity manager factory).

You can inject an endpoint interface as follows:

You can inject a service interface as follows:

The service-ref XML element is used to specify dependency on a web service if you are using deployment descriptor. The following table contains only the elements that are used from EJB clients.

The detailed schema for the service-ref can be found online at java.sun.com/xml/ns/javaee/javaee_web_services_client_1_2.xsd.

The Spring Framework is one of the driving forces behind popularizing the POJO programming model and dependency injection. In this section we will examine how you can inject and use Spring POJOs into EJB 3 Session beans or Message Driven Beans.

The Spring framework provides factory classes based on the following abstract classes that you use to develop Spring-enabled EJBs.

To use a Spring factory class to access a Spring bean, your EJB 3 bean class must implement the onEjbCreate() method.

When an EJB instance is created (when a client invokes an EJB), the onEjbCreate method is invoked automatically. A JNDI lookup is performed to obtain the path for the bean factory by using an environment entry named ejb/BeanFactoryPath. So you have to define it in the EJB deployment descriptor for the EJB: