Gets you started with JavaFX, which makes it easier to build better RIAs with graphics, animation, and media.

JavaFX is an exciting new platform for building Rich Internet Applications with graphics, animation, and media. It is built on Java technology, so it is interoperable with existing Java libraries, and is designed to be portable across different embedded devices including mobile phones and set-top boxes. This Refcard will help you get started programming with JavaFX Script and also serve as a convenient reference once you have mastered the language.

To get started, you will have to download the latest JavaFX SDK from the JavaFX website here: http://javafx.com/.

The instructions in the following tutorial assume that you are using an IDE, such as NetBeans. However, it is possible to do everything from the command line as well.

For the JFXPoetry theme, we will use “Pippa’s Song,” a wellknown excerpt from Robert Browning’s Pippa Passes.

Stage and Scene are the building blocks of almost every JavaFX program. A Stage can either be represented as a Frame for desktop applications, a rectangle for applets, or the entire screen for mobile devices. The visual content of a Stage is called a Scene, which contains a sequence of content Nodes that will be displayed in stacked order. The following program creates a basic Stage and Scene which is used to display an image:

Notice that that JavaFX syntax makes it simple to express nested UI structures. The curly braces “{}” are used for object instantiation, and allow inline initialization of variables where the value follows the colon “:”. This is used to instantiate an ImageView with an Image inside that loads its content from the given URL. To ensure the image resizes with the window, we set preserveRatio to true and bind the Image. Binding is a very powerful facility in JavaFX that makes it easy to update values without heavyweight event handlers. Compiling and running this application will display a picture of a misty morning in Burns Lake, BC, Canada taken by Duane Conlon as shown in Figure 1.1 2 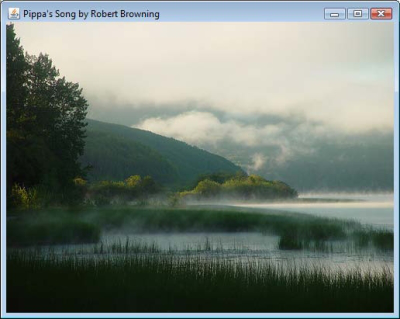 Figure 1: A JavaFX Stage containing an image loaded from the network

Displaying text in JavaFX is as simple as instantiating a Text Node and setting the content to a String. There are many variables available on Text, but for this example we will set the font, fill color, and also add a Drop Shadow effect to make the text stand out on the background.

Notice that rather than specifying the whole poem text on one line we have split it across several lines, which will automatically get concatenated. Also, we have used the bind operator to set both the font size and y offset, which will update their values automatically when the scene height changes. Figure 2 shows the updated example with text overlaid on the Image. 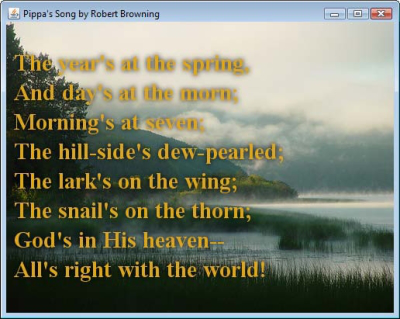 JavaFX offers a large set of graphics effects that you can easily apply to Nodes to create rich visual effects. Table 1 lists all the available effects you can choose from.

Animations in JavaFX can be accomplished either by setting up a Timeline from scratch, or using one of the pre-fabricated Transitions. To animate the Text rising onto the screen, we will use a TranslateTransition, which adjusts the position of a Node in a straight line for the specified duration:

By setting an interpolator of EASEOUT, the text will start at full speed and gradually deaccelerate as it approaches its destination. Animations and Transitions can also be configured to repeat, run at a specific rate, or reverse. To run the transition, all you need to do is call the play() function, which will animate the text as shown in Figure 3. 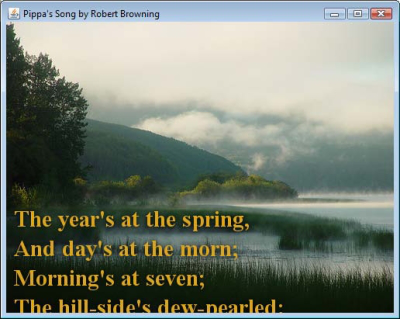 Table 2 lists all of the available transitions that are part of the JavaFX API. To get a feel for how the different transitions work, try adding a FadeTransition that will gradually fade the background in over a 5 second duration.

The JavaFX 1.2 release features a new library of skinnable controls written in pure JavaFX. Table 3 lists some of the new controls and what they can be used for.

The simplest control to use is a Button, which can easily be scripted to play the animation sequence again from the beginning.

Ths bind operator is used to both hide the button while the animation is playing and also center the button in the window. Initially the button is invisible, but we added a new SequentialTransition that plays a FadeTransition to show the button after the translation is complete. Clicking the button shown in Figure 4 will hide it and play the animation from the beginning. 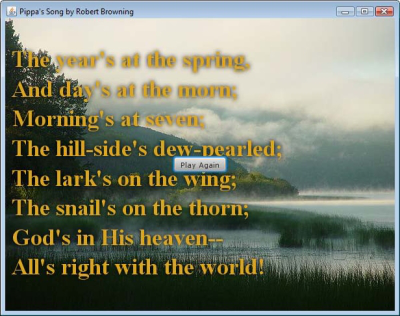 JavaFX 1.2 comes with several new layouts that make it easy to design complex UIs. One of these is the ClipView, which we will use to support dragging of the poem text. ClipView takes a single Node as the input and allows the content to be panned using the mouse:

To ensue the ClipView takes the full window, its width and height are bound to the scene. Also, we have overridden the maxClipX variable with a value of 0 to restrict panning to the vertical direction. The text can now be dragged using the mouse as shown in Figure 5. 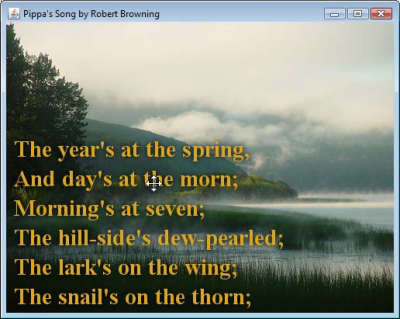 Table 4 lists all of the available layouts that come JavaFX comes with. HBox and VBox have been around since the 1.0 release, but all the other layouts are new in JavaFX 1.2.

JavaFX has built-in media classes that make it very simple to play audio or video either from the local files or streaming off the network. To complete the example we will add in a public domain clip of Indigo Bunting birds chirping in the background. Adding in the audio is as simple as appending a MediaPlayer with autoPlay set to true that contains a Media object pointing to the URL.

In this example we are using an mp3 file, which is supported across platforms by JavaFX. Table 5 lists some of the common media formats supported by JavaFX, including all the crossplatform formats.

To try the completed example complete with animation and audio, you can click on the following url:

The full source code for this application is available on the JFXtras Samples website: http://jfxtras.org/portal/samples

To run the sample in the Mobile Emulator all you have to do is pass in the MOBILE profile to the javafxpackager program or switch the run mode in your IDE project properties. JavaFX Mobile applications are restricted to the Common Profile, which does not include all the features of desktop applications. The full list of restrictions is shown in Table 5.

Table 5. Functionality Not Available in the Common Profile

Over 80% of the JavaFX API is represented in the Common Profile, so it is not hard to build applications that are portable. In this example we used a DropShadow on the text that, once removed, will let us run the example in the Mobile Emulator as shown in Figure 6.

Running as a Desktop Widget

The updates to the code include the following three changes:

To run the widget, simply change your project properties to run the application using Web Start Excecution. This will automatically create a JNLP file compatible with WidgetFX and launch the Widget Runner, which allows you to test your widget as shown in the Figure 7. 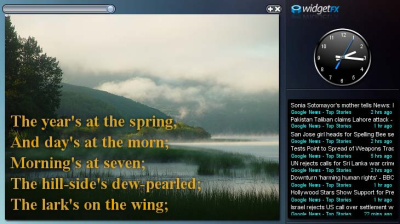 For more information about WidgetFX, including SDK download, documentation, and additional tutorials, check out the project website:http://widgetfx.org/

JavaFX supports all the Java datatypes plus a new Duration type that simplifies writing animationed UIs.

JavaFX Characters cannot accept literals like ‘a’ or ‘0’, because they are treated as Strings. The primary way of getting Characters will be by calling a Java API that returns a char primitive, although you can create a new character by assigning a numeric constant

The following table lists all the mathematical, conditional, and boolean operators along with their precedence (1 being the highest).

JavaFX sequences provide a powerful resizable and bindable list capability under a simple array-like syntax. All of the sequence operators (sizeof, reverse, indexof) have a relative precedence of 2.

The JavaFX access modifiers are based upon Java with the addition of extra variable-only modifiers.

JavaFX supports many of the same expressions as Java, but adds in powerful inline functions and for loop extensions.

JavaFX provides some built-in variables that can be accessed from any code running inside a script.

In the short span of a few pages you have already seen quite a bit of the JavaFX platform. Some other functionality that JavaFX offers includes:

An easy way to view and navigate the full JavaFX API is using the JFXplorer application. The following URL will launch it in as a web start application that you can use to start exploring the JavaFX API today: