Getting Started with GlassFish

A must-have for anyone new to the GlassFish Java application server. It covers version 3 of GlassFish.

The use of GlassFish application server is growing, and having a reference card for day-to-day jobs is inevitable. Looking for a sample command to perform a specific job can take time but by using this refcard, you won't need to look for any commands or lose time searching in countless pages of manuals and administration references. This refcard covers administration, security, and performance management topics.

GlassFish is a Java EE application server which is hosted on Java.net and mainly sponsored by Sun Microsystems. GlassFish usually has full support of the latest Java EE related JSRs. It is accessible both under GPL and CDDL licenses.

What makes it different from other products:

Where to Get GlassFish

Usually more than one version of GlassFish is available for download, which includes the current stable version, the previous stable version with all patch and post ported features, and development builds of the next GlassFish version. You should choose the current version unless you are looking for a maintenance release for past versions, or you are eager to check out new JSRs or functionalities.

Downloading the right version of GlassFish: If you are going to deploy some applications in a production environment you should choose a current stable version. And if you have a very mission critical application, but you do not require to have the latest standards, go with the previous stable version. Development versions are only suitable for experimental tasks and not for production. The current version of GlassFish is GlassFish Version 2, update release 2, which is available at: https://glassfish.dev.java.net/downloads/v2ur2-b04.html.

Selecting a GlassFish version: There are several downloads available for each version of GlassFish. Each of these packages is suitable for one operating system so you need to ensure to get the package designated for your own OS. Go to https://glassfish.dev.java.net/public/downloadsindex.html to access the GlassFish download page.

GlassFish documentation: There is plenty of documentation which will help you to get started or to continue with using GlassFish. Some of the most important:

If you do not have ANT in your environment then you can navigate to the extracted GlassFish directory and execute: 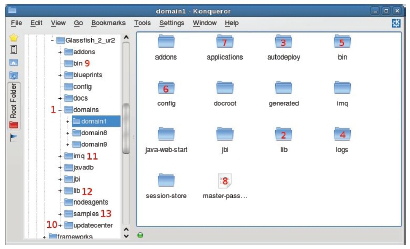 GlassFish provides you with several administration channels which can be used in different situations.

JConsole is a part of the JDK (Java Development Kit). You can run it by issuing the jconsole command in your operating system command line interface.

MC4J is a JMX management console built on top of Net- Beans RCP. It is highly modular and easy to use. MC4J can be found at http://www.mc4j.org.

Each GlassFish domain can be created in one of the following three profiles. Each profile has its own characteristics, and therefore, its own benefits and drawbacks.

You should consider that when you have no replication, you have the best possible performance provided by the application server, and using any kind of replication either in memory or HADB degrades the performance. --profile lets you determine your domain profile during domain creation. Here is a detailed profiles comparison:

If you would like to change the default 60 minutes time out of the web-based administration console to something smaller or bigger, you can use the following command in asadmin CLI:

Some common administration tasks that you may encounter in performing your daily jobs are categorized as follows:

Following are some additional commands related to domain management:

Deploying and undeploying an application: To deploy an application independently from its type (WAR, EAR, RAR, etc.), the following command will do the job. The command has many options which are omitted to show the common use case. Application server should be running to execute the command.

The above image shows how a command will look in the console (cmd in windows, terminal or gnome-terminal in Linux).

However, when you are deploying into a cluster of domains you should use --target parameter to determine that you want to deploy it into the cluster instead of the default server. Required JDBC resources should already be created in order to automatically create and drop tables.

You may omit host, port and user parameters if your target server is the default local server and you are not going to provide alternative user name and passwords.

To create the JDBC connection pool:

Make sure that you take careful look at how we escape ":" in each property, like URL, it is also the sign that we should use to separate different properties. Many of the above parameters are not required if you are going to use default ones. Usually the common attributes --steadypoolsize and --maxpoolsize have default values.

In order to delete the created connection pool you will only need to execute:

Now to create a JDBC resource which your applications typically will look up and use in order to interact with the database:

Take a closer look at what is written in bold. If you want to connect to the server using a secure connection then you should include --secure parameter, and also use the https port of the application server administration console.

To delete the created resource:

Here are some commands related to JDBC resource management:

Here are some related commands:

GlassFish provides very good monitoring facilities. You can monitor the application server using all three administration channels mentioned earlier. Monitoring is a bit different than other commands, because first you should know what you want to monitor, then you need to change the level of monitoring, and finally you can monitor the element.

The target instance that we monitor is the "server" instance, and we only like to view monitoring data for one connection pool. The command stores the monitoring data in a csv file.

Now you can use this file to avoid typing your administration password.

Some debuggers which can be used:

Usually this number is close to your number of CPUs or CPU cores.

Changing this number depends on what kind of resources each request needs to be fulfilled. For example, it only needs CPU or database and process management is involved too.

Definitions should be included in JspServlet definition.

The most important source for troubleshooting is in the log files. GlassFish stores log files in directory #4 in Figure 1 on page 2.

server.log is the most important log file that GlassFish creates, so it will be the source for finding possible problems.

You may use rotation to have old log files stored for further review or you may change the logging level of a component, which you think is the source of a problem, by looking at:

Make sure that you never use extensive logging in a production environment.

Diagnostic Reports for your Domain

GlassFish can generate a diagnostic report from the application server state. The report can be generated with different levels of detail:

This report gives you a snapshot of your domain with all related log files and configuration for later review. The report is compressed as a jar file and contains some interrelated HTML files for each type of information you may need.

A cluster is a logical entity of several homogeneous server instances. Instances can be on a single machine and single subnet, or they can be scattered throughout several machines and subnets. Usually each machine is called a node and has at least one Node Agent. The Node Agent is a process responsible for the life cycle of the instances (create, stop, start, delete, watchdog) that is running on that machine. To be clear, a server instance is a running domain in a GlassFish installation.

GlassFish application server has clustering capabilities and is compatible with several web servers, or hardware appliances, as the load balancer.

A cluster is usually controlled by a domain that is usually served as the single point of cluster administration and not for serving applications. This domain is called DAS (Domain Administration Server). Administrators use DAS to configure and manage the clusters that are created under it.

When using HADB, the performance will degrade but the reliability will be the highest because all replicate information will get persisted in multiple instances of HADB.

A cluster needs to have a load balancer to distribute the load (Incoming Requests) between all instances in order to prevent a server from saturation.

Figure 2 shows a complete anatomy of a clustered system. 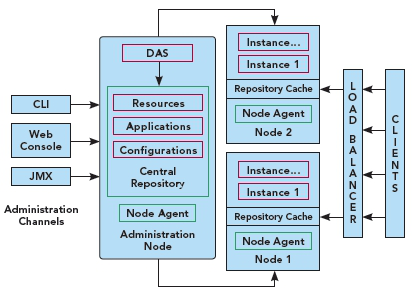 To set up a cluster you will need GlassFish Application Server, Version 2: https://glassfish.dev.java.net/downloads/v2ur2-b04.html. Make sure that you choose the correct distribution for your operating system.

To set up the DAS, install GlassFish in the cluster or enterprise profile:

Now you need to have a (in-memory replicated) cluster in your DAS that will be the single point of management for all of its instances.

In each one of the cluster's node, GlassFish should be installed in the Cluster or Enterprise profile in order to be able to create domains with clustering capabilities. To set up GlassFish in a node, use the following command:

Create a node agent on the node that will host some instances. Using the --port and --host is necessary in order to let the Node Agent understand where the DAS is, and that it should communicate and join.

Creating instances is possible both from the DAS administration console or CLI, and from the node's CLI itself. To use DAS CLI to create some instances assigned to a specific cluster:

By starting the cluster, all in-memory information of every instance member will be the same in order to have a homogeneous farm of servers.

To set up the load balancer, visit  https://glassfish.dev.java.net/javaee5/build/GlassFish_LB_Cluster.html.

An instance can only be a member of one cluster and not more.

IP multi cast should be allowed between subnets when we have instances on multiple subnets.

Instances which form the cluster virtually shape a ring topology network. Each instance gets a replication date from the previous one and sends its data, in addition to received data, to the next member in the ring. Instances are sorted in alphanumerical order. So the best bet for maximizing the availability, and having all data, is sorting cluster members in a way that none of the instances which resides in a single node come one after another. You can do this by selecting proper names for instances.