Join For Free
let’s say you have a large piece of text and a dictionary of keywords. how do you quickly locate all the keywords?

well, there are many ways really, you could even iterate through the whole thing and compare words to keywords. but it turns out that’s going to be very slow. at least o(n_keywords * n_words) complexity. essentially you’re making as many passes over the text as your dictionary is big.

in 1975 a couple of ibm researchers – alfred aho and margaret corasick – discovered an algorithm that can do this in a single pass. the aho-corasick string matching algorithm .

i implemented it in haskell and it takes 0.005s to find 8 different keywords in oscar wilde’s the nightingale and the rose – a 12kb text.

a quick naive keyword search implemented in python takes 0.023s . not a big difference practically speaking, but imagine  a situation with megabytes of text and thousands of words in the dictionary. the authors mention printing out the result as a major bottleneck in their assessment of the algorithm.

at the core of this algorithm are three functions: 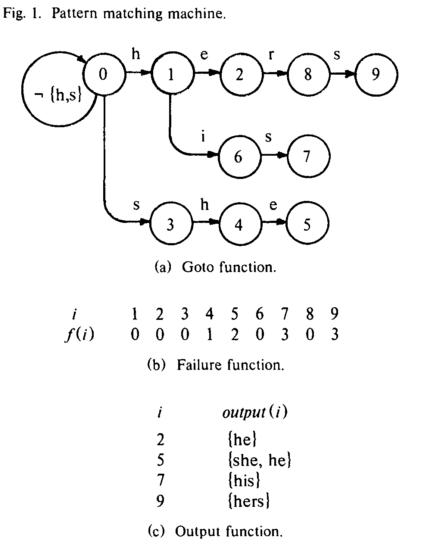 the three functions of aho-corasick algorithm

the algorithm works in two stages. it will first construct the goto, failure and output functions. the complexity of this operation hinges solely on the size of our dictionary. then it iterates over the input text to produce all the matches.

using state machines for parsing text is a well known trick – the real genius of this algorithm rests in that failure function if you ask me. it makes lateral transitions between states when the algorithm climbs itself into a wall.

say you have she and hers in the dictionary.

the goto machine eats your input string one character at the time. let’s say it’s already read s h . the next input is an e so it outputs she and reaches a final state. next it reads an r , but the state didn’t expect any more inputs, so the failure function puts us on the path towards hers .

this is a bit tricky to explain in text, i suggest you look at the picture from the original article and look at what’s happening.

the first implementation i tried, relied on manully mapping inputs to outputs for the goto, failure and output functions by using pattern recognition. not very pretty, extremely hardcoded, but it worked and was easy to make.

first off, we build the goto function.

essentially this builds a flattened prefix tree in a hashmap of (state, char) pairs mapping to the next state. it makes sure to avoid adding new edges to the three as much as possible.

the reason it’s not simply a prefix tree are those lateral transitions; doing them in a tree would require backtracking and repeating of steps, so we haven’t achieved anything.

once we have the goto function, building the output is trivial.

we are essentially going over the dictionary, finding the final state for each word and building a hash table mapping final states to their outputs.

building the failure function was trickiest, because we need a way to iterate over the depths at which nodes are position in the goto state machine. but we threw that info away by using a hashmap.

we now have a list of lists, that tells us at which depth certain nodes are.

here we are going over the list of nodes at depths and deciding what the failure should be for each depth based on the failures of depth-1. at depth zero, all failures go to the zeroth state.

an important part of this process was inverting the goto hashmap so values point to keys, which is essentially what the key’ function does.

finally, we can use the whole algorithm like this:

you can see the whole code on github here .