What is Node.js? Why use Node.js? Let's dig deeper and find out more details to help you decide whether this environment is the right choice for your app development.

Are you developing an app from scratch? Want your app to be fully functional? If so, you need to choose the right tools, platforms, and languages.

If you're working on a web application, you're undoubtedly weighing the benefits and drawbacks of basing your stack on JavaScript and the tools that support it. And, once you start researching development platforms, you'll almost certainly come across Node.js.

Node.js is a cross-platform open-source runtime environment and library used to run web applications outside the client's browser.

Initially, it was created by Ryan Dahl in 2009. Dahl was inspired to create it after seeing a file upload progress bar on Flickr and being dissatisfied with existing solutions for building web applications. So, he decided to develop an environment that would be lightweight and easy to use.

And that's how it was born. Now, you are probably wondering what to use node js for. It is used for server-side programming and primarily for non-blocking, event-driven servers like typical websites and back-end API services. Every browser has its JavaScript engine, and Node.js is based on the V8 JavaScript engine in Google Chrome.

Is Node.js a Programming Language?

It is necessary to understand that Node.js is not a framework or a library, as with traditional application software, but rather a runtime environment.

A runtime environment (RTE) is a collection of web APIs that a developer can use to create a code and a JavaScript engine to parse that code. This makes it lightweight, versatile, and simple to deploy, all of which will assist in optimizing and accelerating your application project.

After this brief crash course, you'll be ready to move on and learn why using Node.js for your app development out of the available tech stacks is a good idea.

5 Reasons to Use Node.js for App Development

Node.js offers the potential for rapid development and competes with Java, Go, Ruby on Rails, and Python. Here are five benefits to answer the question of what to use Node.js for.

1. Language Sharing Across the Stack

With Node.js, JavaScript is used for front-end and back-end development, making the language more consistent across the entire application. This contrasts with most applications, which use different languages for the front end (like HTML, CSS, and JavaScript) and back end (like PHP, Ruby on Rails, or Java).

When using Node.js, you may exchange code between client and server apps. You can use JavaScript for the entire development process, allowing for improved communication between back-end and front-end teams. This also makes full-stack development more straightforward and accessible, as you no longer need to locate an engineer fluent in numerous programming languages.

Last but not least, while many Node.js developers choose to work with JavaScript because it is dynamically typed, those who prefer static typing can utilize TypeScript. Node.js allows you to select either option to tailor your working environment to your specific requirements.

The JavaScript language is relatively simple to learn, and every front-end developer knows it. This makes for a very short learning curve when moving from front-end to full-stack development using Node.js.

The Node Package Manager (NPM) is one of the most significant advantages. NPM allows you to download and use code packages other developers provide in your projects. As a result, you won't have to develop nearly as much code from scratch.

Node.js hosts the most extensive software library registry in the world. It contains over 1.3 million packages in the main registry, all of which have been created by the Node.js community, making it easy to find solutions to various problems you may encounter while developing your app.

NPM makes it simple to manage application dependencies by installing the library's code and all dependents. And when combined with GitHub, the world's largest code repository, you have access to an immense amount of code that can be used to solve various problems.

Node.js is known for using a single-threaded event loop architecture, which is ideal for microservices. When a Node.js app starts, it initializes the event loop and then executes a single instruction at a time.

This approach has several benefits.

A host is required for all web applications, and Amazon Web Services (AWS) is the most used hosting platform, accounting for 32% of the cloud market. AWS supports Node.js natively and is intimately integrated with the platform.

Why use Node.js? First, it makes full-stack development easier due to language sharing across the stack. Also, app development is rapid in this runtime environment, mainly because the most extensive software library registry in the world is hosted by it. In other words, whenever you encounter a problem, you will likely be able to find the solution in the library.

Last but not least, did you know that some of the most popular apps use Node.js at their core? This has allowed them to handle millions of visits and develop their features over time. Let's check them out! 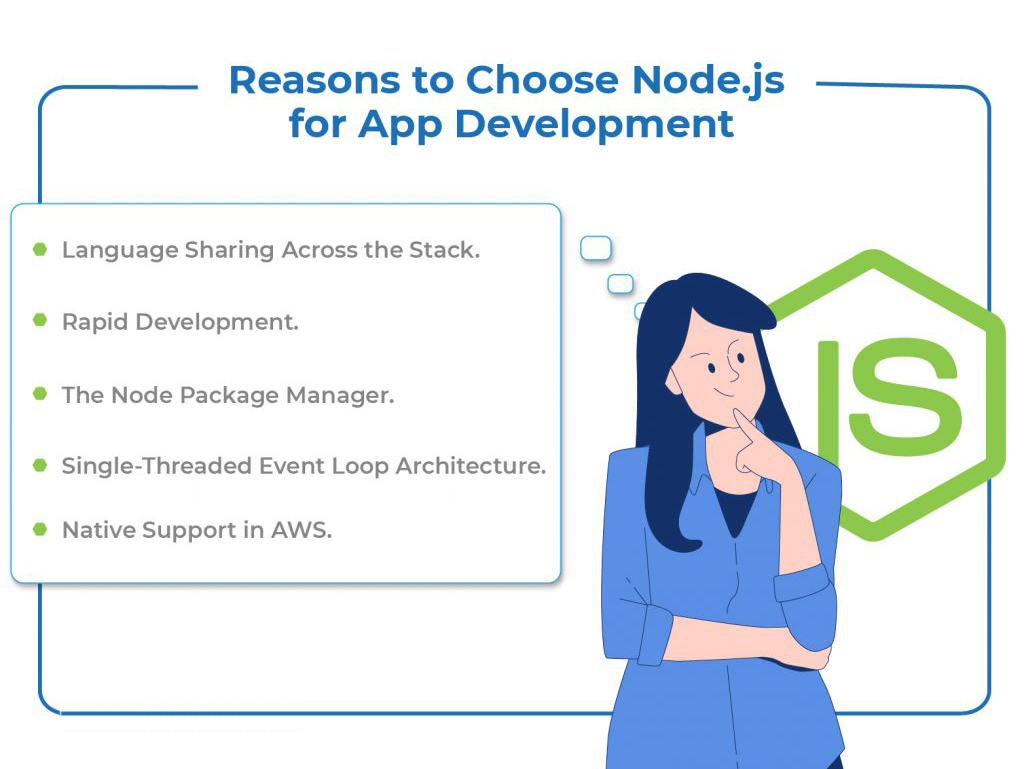 Node.js is used to create scalable desktop and mobile apps and web and IoT projects that need to handle large amounts of connections without experiencing any issues. For that reason, some of the most popular apps switched to Node.js after years of using other runtime environments.

If you're still wondering why you should use Node.js, look no further. Netflix, Uber, and other popular apps use it, so there must be something to it!

Netflix is the world's leading streaming service, with over 150 million subscribers in over 190 countries. It offers an extensive library of films and TV series, including those produced in-house.

Also, Netflix is known for investing vast sums of money into improving and developing its services. Netflix spends $150 million annually on improving its recommendation system, and the company spent $1.5 billion on development in 2019. Also, Netflix has been spending roughly $9.7 million per month on AWS since 2016.

There's no better choice than Node.js when streaming enormous volumes of information to thousands of users simultaneously. It has helped Netflix handle the massive amount of traffic it receives.

So, if you're wondering why you should use Node.js, Netflix is a terrific example of how this environment fosters business growth and customer happiness.

Twitter is a top-rated social networking platform with over 330 million monthly active users. It is also one of the ten most visited websites in the world.

Since its launch in 2006, Twitter has undergone several redesigns and changes. The company decided to switch to Node.js in 2017, and since Twitter's developers began using Node.js, they've been pleased with its development speed.

The main reason for the switch was Twitter's need for a language that would allow them to make changes rapidly and deploy them immediately. Node.js fit that bill perfectly, and since then, it has helped the company move faster and scale more easily.

Uber is a ride-hailing service present in over 700 cities in 65 countries. It offers its services to over 110 million users and has over 3 million drivers.

Since its founding in 2009, Uber has dominated the car-sharing market.

Uber decided to use Node.js to build its core, make its app more responsive, and improve its real-time capabilities. Node.js has helped the company handle massive traffic and scale quickly.

Slack is a collaboration tool that helps people communicate and work together more efficiently. It has over 12 million active users and is used by some of the world's leading companies, including NASA, Airbnb, and eBay.

Slack decided to use Node.js because of its event-based architecture, which makes it ideal for real-time applications. The company needed an environment allowing them to handle many concurrent users and fit the bill perfectly.

Coursera is an online course provider that partners with top universities and organizations to offer online courses, certificates, and degrees. It has over 3,000 courses and numerous degree and master's programs.

The company was founded in 2012 by two Stanford professors and now has over 33 million users worldwide.

Since its launch, Coursera has been built entirely on Node.js. The company needed a JavaScript framework allowing fast development and easy scalability. Node.js was the obvious choice since it is lightweight and offers a wealth of modules that can be used to add various features to an app.

As you can see, there are many reasons to use Node.js for web and app development. It is fast, scalable, and has a vast ecosystem of modules that make development easier. Also, it is supported by Amazon Web Services and used by some of the most popular apps in the world.

And regarding what to use Node js for? If you're looking for a JavaScript framework to help you develop an app quickly and easily, Node.js is the obvious choice. But keep this in mind—unless you have a team of experts and UX/UI designers, it won't be easy to take advantage of this technology at its full potential.