It can be difficult to understand ideas like front-end vs. back-end development if you're not a developer or engineer. Things may become quite perplexing when you add all the frameworks, programming languages, APIs, and libraries that developers use to create apps.

The positive news The fundamentals of back-end development and the various parts of a typical "software stack" can be understood without writing any code. In fact, whether you're a CEO, a hiring manager, a salesperson for a tech startup, or a product manager, knowing your way around it is helpful.

We've compiled a series of articles that address some essential concepts in back-end development in a way that non-developers can comprehend in order to assist you in becoming an expert in the field. Along with learning what server-side scripting is and what back-end engineers do, you'll also get knowledge of the benefits of various programming languages, how the cloud is changing the industry, the significance of APIs, and how to choose the framework that will work best for your project.

What Is Back-End Development?

Back-end development is the process of creating the server-side logic that runs the background operations of websites and apps. It contains every piece of code required to develop the database, server, and application. A back-end web developer can have the skills you need to launch your next web project, from database migrations to API integrations to set up the server-side technologies that power a website.

You need to know the front end and how the two work together in order to comprehend the back end, commonly known as the "server side." Everything that consumers view and interact with is done on the front end, commonly known as "client-side" programming. On the other side, the server (on-site or in the cloud) and databases handle the back end. Everything that drives what is happening is powered by the machinery that operates in the background—everything that the end user does not see or directly interact with.

This practical method of allocating development has seen major change over the past 10 to 15 years due to the enormous expansion of JavaScript, which wasn't as widespread on the front end as it is now or as frequent on the back end due to Node.js. More similarities exist between the two, particularly in the case of a JavaScript engineer working on a stack that is entirely powered by JavaScript. 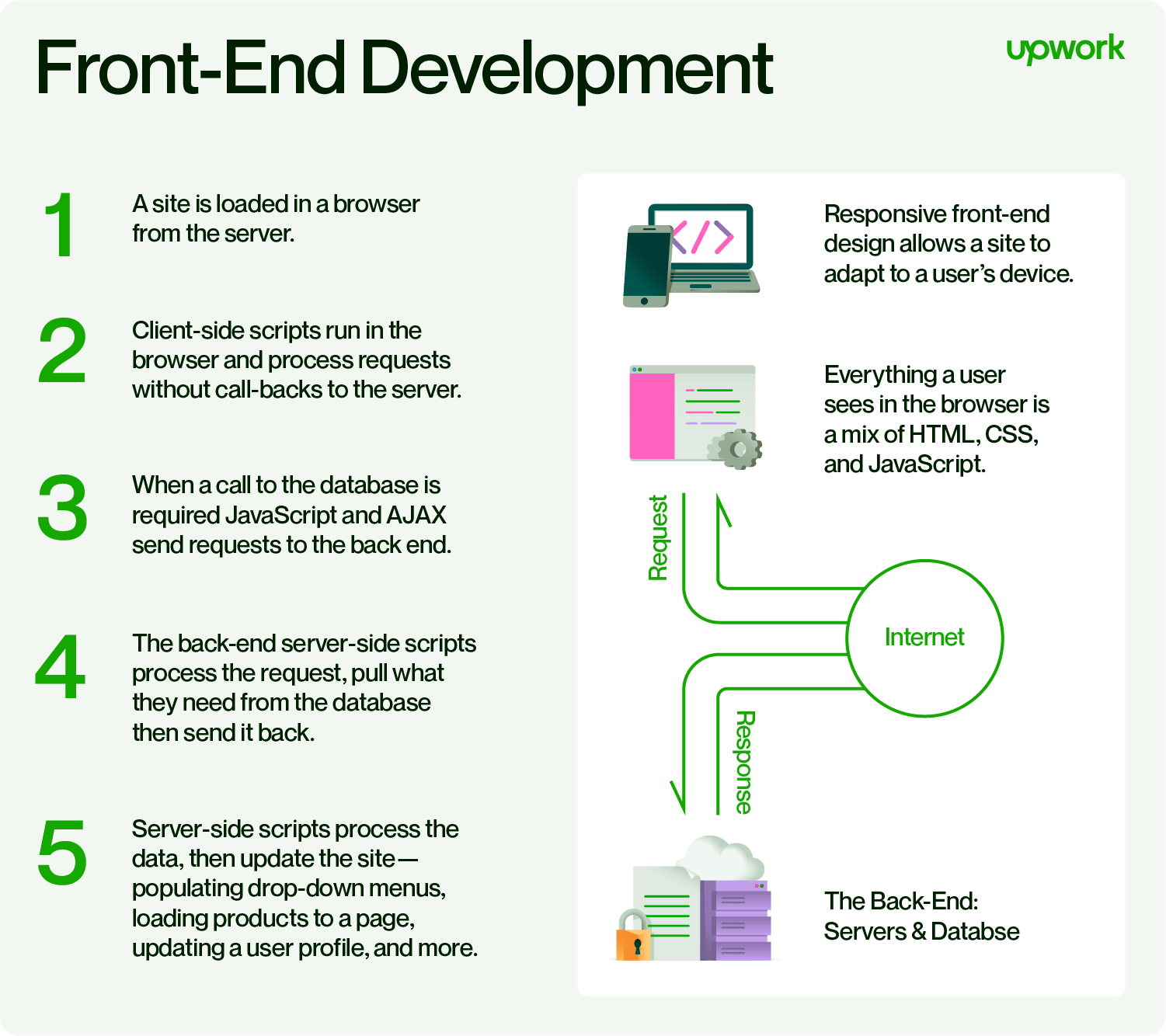 You can see how all of the requests that result from user clicks are handled by the server side (in the green box). The requests are forwarded to the server side by front-end scripts, which then return the necessary data to the front end after processing them. This frequently occurs in a never-ending cycle of requests and server responses.

Let's now examine the operation of back-end architecture, the computer programs, and the hardware that takes over in step four of the diagram above. 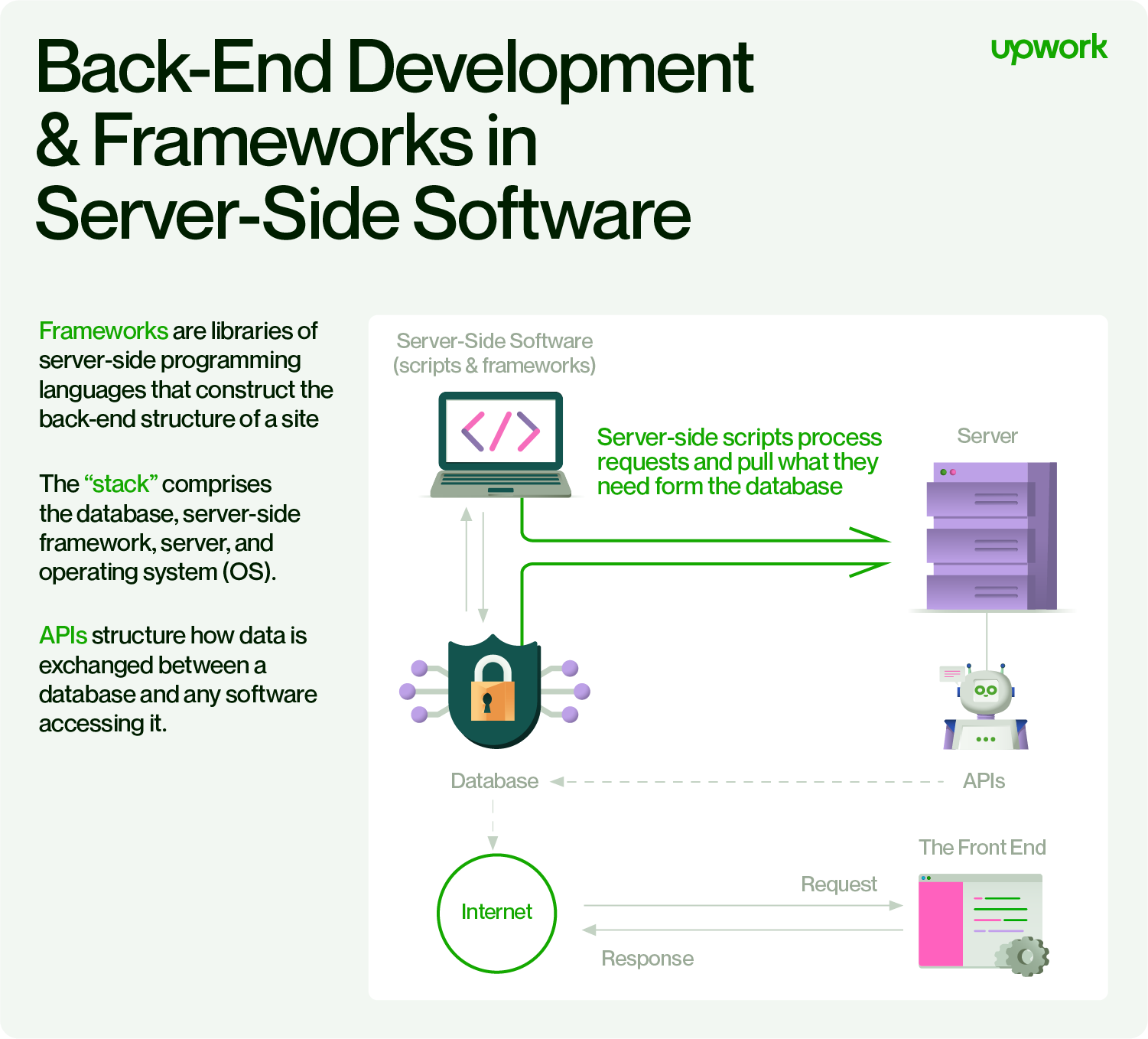 The server, databases, APIs, and operating systems that support an app's front end make up the "conventional" back end. Read our article on Server-Side Scripting for a detailed look at the program that makes it all work together. Whether it's the utilization of cloud-based servers and data warehouses, containerization with a service like Docker, Backend-as-a-Service (BaaS) providers, or APIs to replace more complex processing, the back end of apps can appear extremely different from application to application.

The file size, performance, compatibility, number of lines of code needed, and programming style will vary amongst back-end languages. Object-oriented programming, a method of programming that groups characteristics and functions within objects, is used in several back-end scripting languages. Other languages might be compiled rather than interpreted, which has an impact on the application's load time, readability, and processing requirements.

Let’s take a look at the different types of back-end programming languages.

All the C features are combined with object-oriented programming tools like classes in C++. It is utilized as a low-level programming language to effectively communicate with system hardware for improved performance. This makes it perfect for system-level performance-sensitive applications like video games, huge web apps, and other use cases.

The preferred language for Windows servers and environments is C#. If your development team uses Microsoft technologies like ASP.NET as the foundation of your technological stack, C# is probably going to be the most effective language for them to use.

The object-oriented general-purpose programming language Java was created with cross-platform interoperability in mind. Java programs can be run on any computer that has the Java Virtual Machine (JVM) installed.

Node.js proved to the world that this all-purpose object-oriented programming language, which was previously thought of as a front-end scripting language, could also be utilized on the server side of applications. JavaScript, one of the fundamental web technologies, is currently a well-liked option for both front-end and back-end web development.

The most used back-end language for the web is PHP. In addition to having a large codebase and a long history of open-source developer community support, PHP has a low learning curve and is well suited for use as the back end of websites. If you've ever used WordPress to create a personal website, PHP was likely powering the back end.

Perl is a general-purpose programming language that was created by Larry Wall in the 1990s and is well-known in the Linux and Unix communities. Text editing and log management are two areas in which Perl excels. It works well for quickly creating brief automation programs.

Front-end development, which is primarily influenced by JavaScript, HTML, CSS, and other front-end frameworks leveraging these languages, can be far more diverse.

We'll divide the server side into four key "software stack" components in order to make things simpler: the server, the database, the operating system, and the software.

More details regarding each of these backend elements are provided below. 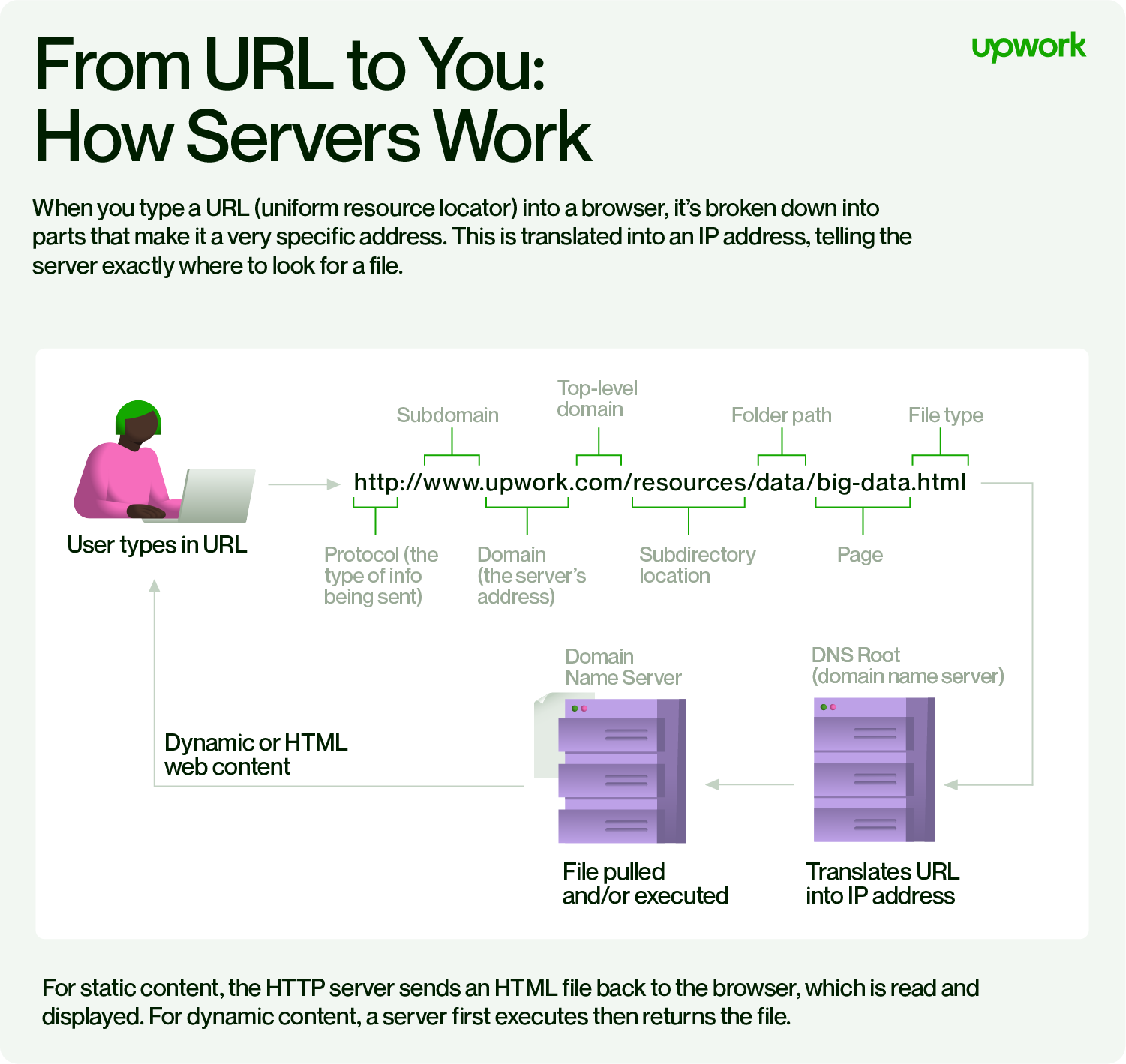 The server is the engine of the network out of the four parts of your back-end stack, whether it's on-premises or in the cloud. These powerful computers provide the shared resources—such as file storage, security and encryption, databases, email, and web services—that networks require to function. Once you understand the fundamentals of on-site servers, broaden your understanding by looking into virtualization, which describes how servers are set up to host different apps, and containerization, which describes another way that servers set up their operating systems to host discrete programs. 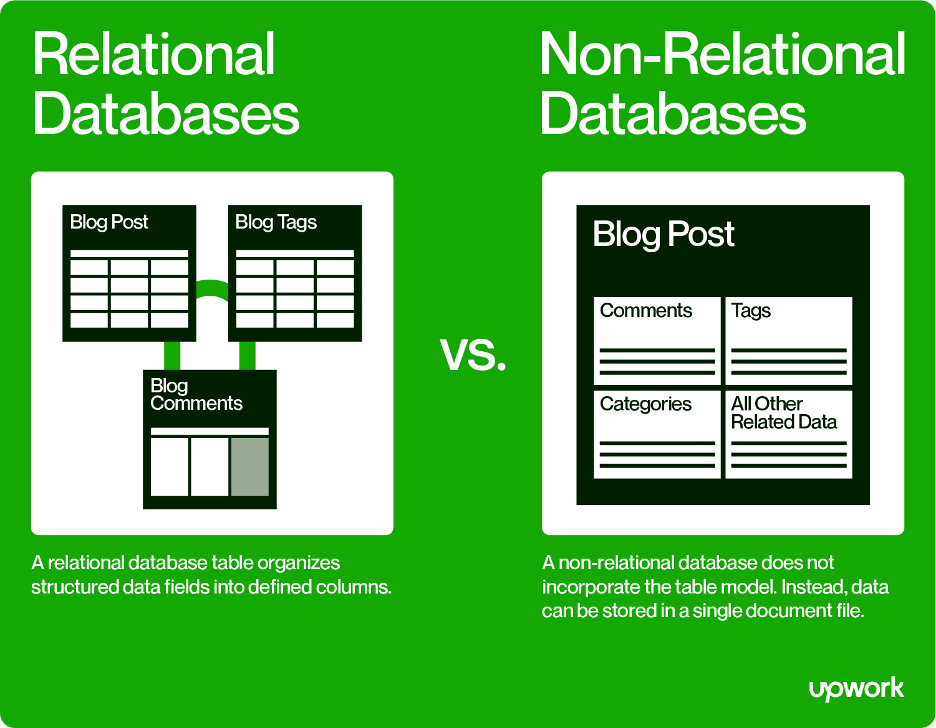 In the context of a website, databases serve as the brains that give websites their dynamic nature. When you ask a website for something, whether you're looking for a product in an online store or looking for hotels in a particular state, the database is in charge of accepting your request, retrieving the information, and sending it back to the website. When people interact with databases via a website or application, new and modified data can be added. Whether a user is writing articles to a CMS, uploading photographs to a social network profile, or updating their customer information, they can alter information in a database from the browser.

You will learn how databases function and common concepts used in modern database technology in this concise guide. 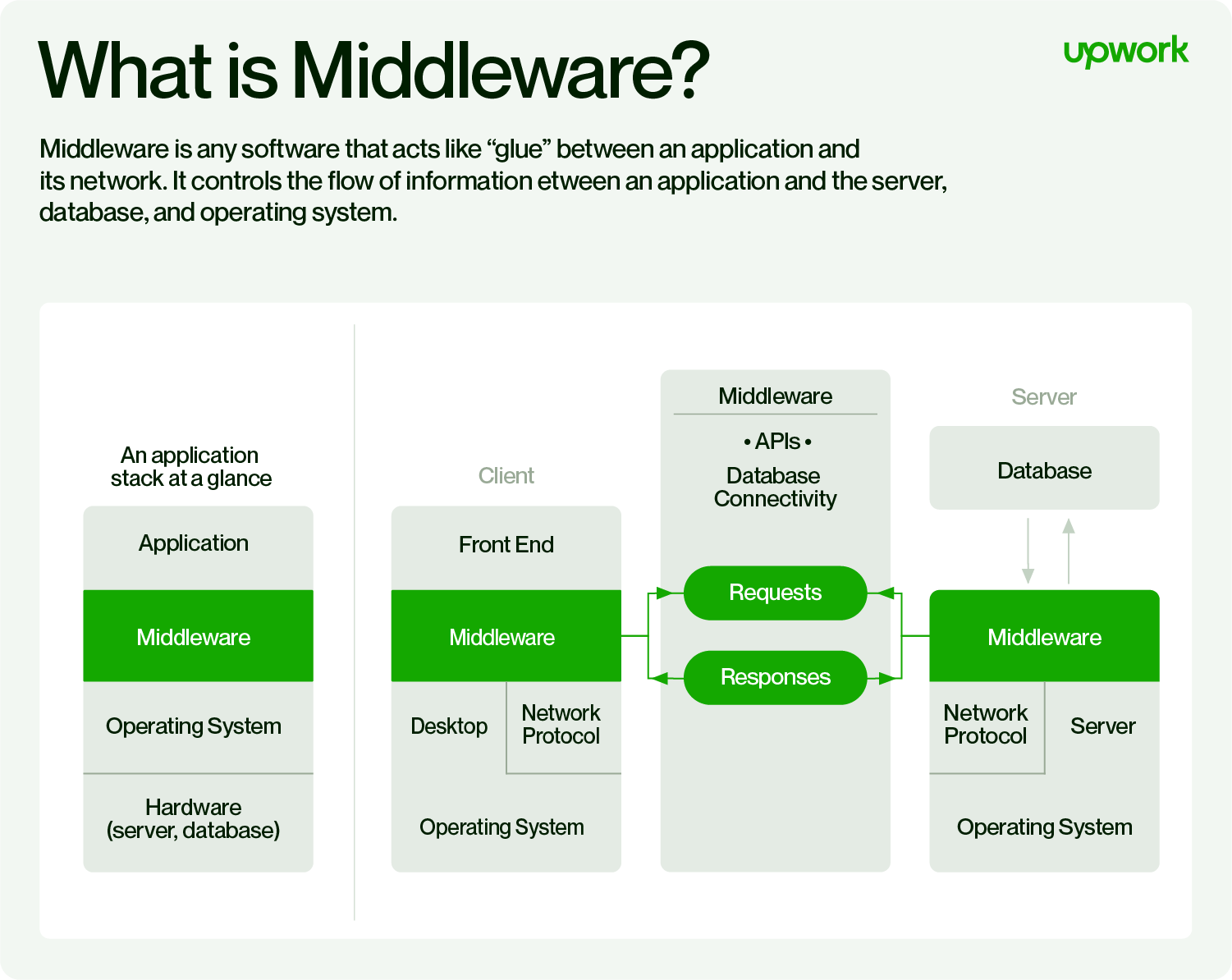 In essence, middleware refers to any server-side software that links an application's front end and back end. Imagine middleware as the plumbing for your website—it sends requests and responses back and forth from your application to the server or database. Similar to plumbing in a house, middleware is invisible but necessary, and it must be dependable and consistently perform the tasks that are expected of it.

Middleware (server-side software) creates a middle layer between the app(s) and the network, including the server, database, operating system, and others, to enable client-server interaction. Regardless of whether it is the presentation layer or the business layer, middleware can be multi-layered and arranged into several tiers of a website. Web APIs can also be used in this area of the stack to act as a link between the business layer and the presentation layer.

The programming languages and frameworks needed to create various kinds of middleware, APIs, and server-side software will next be discussed. 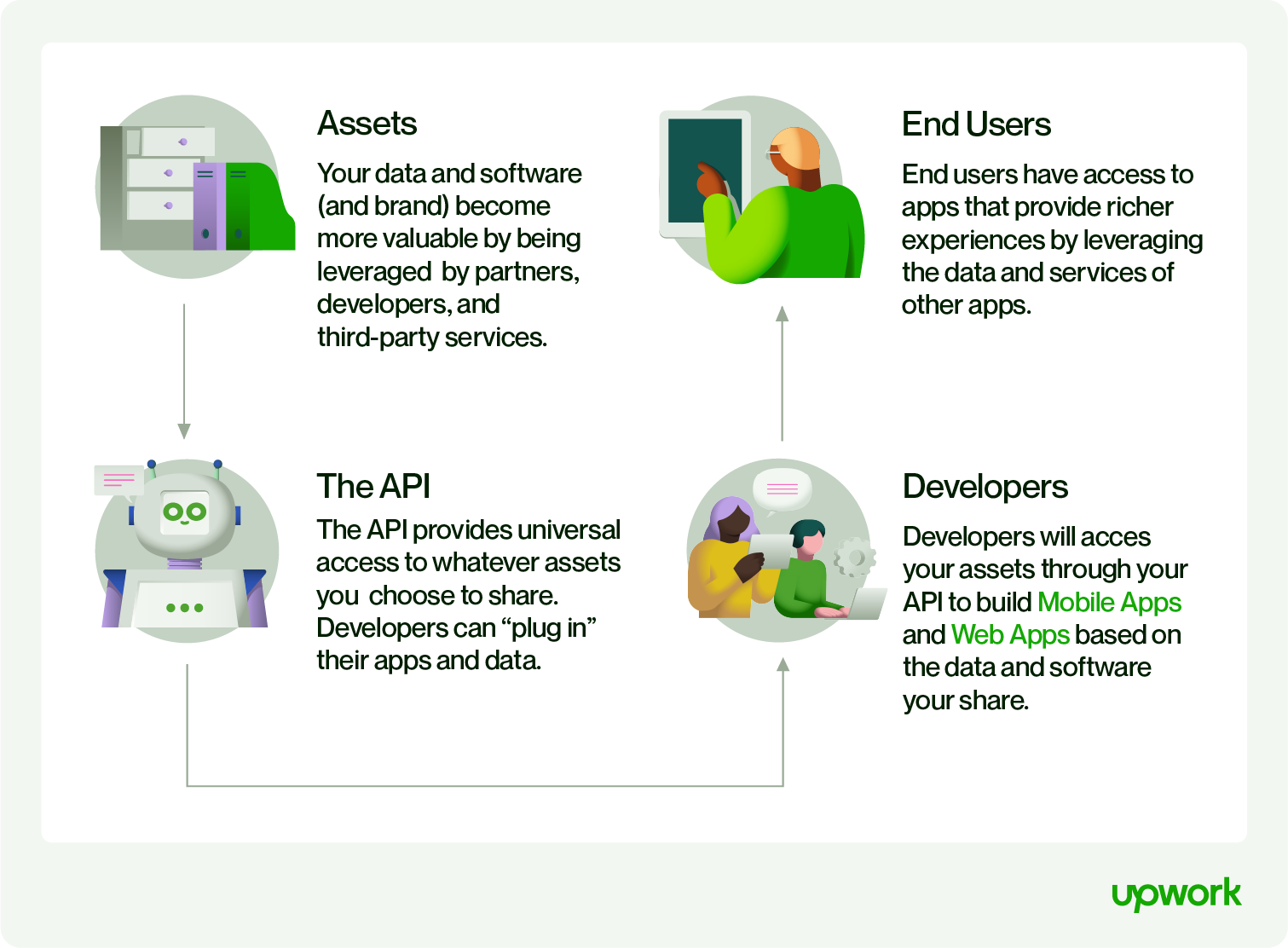 These days, it's impossible to discuss the back-end element of an application without mentioning APIs (application programming interfaces) and the smooth connections they make between software, apps, databases, and services. The majority of server-side software designs are constructed using APIs, which frequently take the place of more complex programming to enable software communication and data transmission.

The term "back-end development" refers to the server side of any program (not just websites). Thus, a variety of different occupations can benefit from having a basic understanding of how to create an application's back end. Let's examine the most prevalent positions in back-end development:

Their primary responsibility is to create a website's back end. They are in charge of developing and maintaining a website's server, database, and business logic.

Developers who are adept at both the front-end and back-end of a technology stack are known as "full-stack" developers. They might be the only developer creating a minimally viable product on tiny projects. They serve as team leads on bigger projects and aid in integrating an app's front and back ends.

Java developers are in high demand in the enterprise software sector, working on everything from websites to desktop programs.

Depending on the job description, this may be another position for a Java developer or for a developer of any of the other languages we mentioned earlier. Software development positions typically pertain to desktop software and other non-website applications.

Even if you are aware that your project requires back-end engineering and development, you might not be aware of the specifics or the specialists you'll need. We've put together a few more resources for you to use when looking for that top-notch back-end developer.

If you've chosen a stack or technology, Upwork's Hiring Guides offer articles to assist you in finding, hiring, allocating funds for, and creating job descriptions for a range of professionals, including PHP developers, SQL developers, C# developers, and .NET developers.

Start your hunt for outstanding talent to invite to your project once you've published your job posting. You may dive down into the talents and categories you require using Upwork's intelligent filters. Alternatively, you can look up reviews of engineers and architects and filter them by ratings and location. These trustworthy, first-hand testimonials assist in introducing you to individuals who have achieved success on projects similar to yours.