A lot has changed since the inception of the Java programming language, but the Java Collections Framework (JCF) has been a consistent backbone of Java since its early days. Although many improvements have been made to the JCF, not the least of which has been the addition of generics and concurrency, the JCF has remained largely the same. Throughout this time, collections have become an indispensable part of nearly every Java application and learning to use these interfaces and classes has become a requirement for most aspiring Java developers.

In this series of articles, we will deep dive into the world of Java collections, starting with the general concepts of collections and the collections interface (this article), and devoting an entire article to each of the primary collection data structures: Lists, sets, and queues. By the completion of this series, we will have covered the fundamentals of each of these concepts as well as the advanced topics, including complete coverage of the primary methods of each interface and class, the intention behind each collection implementation, the benefits and trade-offs each implementation offers, and when to select a specific implementation.

It is the goal of the author that by the end of this series, the reader will have a lasting and intuitive understanding of each major collection type, and the JCF in general. To kick off this series, we will start with the story of how we got to where we are.

Other articles in this series:

The Developer's Guide to Collections: Sets

A Trip Down Memory Lane

During the early days of Java, no common collection framework existed; the best that was available were loosely collected data structures in the form of arrays, Vectors, or Hashtables. Unlike many popular programming languages at the time, Java did not combine these disparate types into a framework, with common ancestors and universal characteristics. With the introduction of the Standard Template Library (STL) in C++ in 1994, Java lagged behind in creating a common framework with hierarchical data structures.

Up to the release of Java Development Kit (JDK) 2 in late 1998, the most popular, full-featured collections frameworks that existed were the Generic Collection Library (JGL) by ObjectSpace and Collections Package by Doug Lea. Using the JGL as a basis, Joshua Bloch (author of the Effective Java series) designed much of the JCF that we know today. As a matter of fact, the author tags for many of the collection classes still have his name to this day. With the advent of JDK 2, a basic collections framework was introduced to Java, but this collections framework got a major upgrade in Fall of 2004 with the release of JDK 5. This Java release introduced type-erased generics, which transformed the JCF from a type-unsafe framework (requiring explicit casts when retrieving elements) to a full-fledged generic framework. JDK 5 also introduced concurrency in the JCF (through Java Specification Request  (JSR) 166), spearheaded by the forefather of the JCF: Doug Lea.

Since that time, various upgrades have been made to the JCF, including the introduction of functional programming concepts in the form of the Streams Application Programming Interface (API), but the JCF has largely remained the same. Being that it is one of the most widely used of the Java frameworks, updates and improvements to the JCF have been one of the foremost concerns of the Java community, even from the infant days of Java.

The Concept of a Collection

In the Java environment, a collection is defined as follows:

A collection represents a group of objects, known as its elements

This definition is intentionally vague. It makes no statement about how the elements in a collection are grouped, if these elements are randomly accessible, if duplicate elements are allowed, or if elements are ordered. Instead, Java only requires that elements can be added to a collection, removed from a collection, and iterated over (without declaring an iteration order). Additionally, collections must provide queries for its current state, such as the current number of elements it contains, if the collection is empty, and if an arbitrary element is within the collection; they must also provide conversion methods to arrays (for compatibility with existing array-based applications). With the addition of the Streams (API) in JDK 8, collections must also be convertible to a stream of its elements.

Based on this description of a collection, we can define the following set of responsibilities:

As expected, Java captures these responsibilities in the Collection interface, which is parameterized with a formal generic parameter, E, that represents the type of its elements. JDK 9 defines this interface as follows:

The contains(Object o) method checks if the supplied object is contained in the collection according to the following rule:

An object  a is contained in a collection if there exists some element b in the collection that satisfies the ternary expression  (a == null ? b == null : a.equals(b))

It is important to note that this does not mean that the equals method of a will actually be invoked. It is left to the implementation to decide how to test for equality. Optimizations may be made, depending on the nature of the collection. For example, the hashCode() method specification states that two objects with different hashCode() values are by definition not equal, and therefore, an implementation may favor this means of testing equality, rather than explicitly executing a.equals(b).

The first method, iterator(), simply returns an Iterator object (which we address shortly). The forEach method is a straightforward default implementation that allows a non-null action to be performed on each of the elements in a collection. This method utilizes the for-each loop (formally called the enhanced for loop), which is a syntactic optimization that allows a for loop to be condensed for any iterable object:

There are some limitations to this style, such as removing an element during iteration, as we will see shortly. The last method creates a Spliterator, which can partition a collection and facilitates iteration over these partitions. Spliterators are a complex topic and are closely related with parallelism in the collections framework, and are therefore not covered in this article. The curious reader should consult the Spliterator documentation and Java 8: A Quick Introduction to Parallelism and the Spliterator for more information.

Following the Iterator pattern, the primary methods in this interface are the hasNext() method, which returns true if there are more elements to iterate, and the next() method, which returns the next element to be iterated and advances the current element in the iterator (i.e. ensure that the next call to next() will produce the next element of the collection, not the same element ad infinitum). Beyond these fundamental methods, the Iterator interface also includes two important methods: remove() and forEachRemaining(Consumer<? super E> action).

Instead, remove() must be called on an Iterator object to remove an element from a collection while iterating over that collection. For example:

Note that next() must be called before calling remove(), as the next() method advances the current element in the iterator. While the combination of the next(), hasNext(), and remove() method cover a vast majority of the functionality that a developer will commonly use when dealing with iterators, there are countless great resources that go much deeper on this important topic. For more information, consult the Iterator documentation and the Oracle Collection Interface documentation.

For example, a call to this parameterized method would resemble the following:

It can be tempting to optimize this call by pre-allocating an array of the same length as the size of the collection. For example:

As noted by Joshua Bloch in Effective Java, 3rd Edition (pg. 248), Item 55, this pre-allocation optimization should be avoided. For a quantitative analysis of the performance differences between these two array pre-allocation techniques, see Arrays of Wisdom of the Ancients.

One of the major additions to JDK 8 was the inclusion of the Streams API. This API introduces functional programming semantics to Java collections, treating collections as a stream of data that can be mapped, filtered, reduced, etc. The default implementations of the stream-based methods for the Collection interface are as follows:

As with Spliterators, streams are a very involved topic and beyond the scope of this series. The curious reader can find more information at the Stream class documentation.

The power and utility of the JCF does not come from a single Collection interface, but rather, the various other interfaces, abstract classes, and concrete implementations that make up the framework. Of these other collection types, three stand out in their ascendency: (1) List, (2) Set, and (3) Queue. A list is an ordered collection, or sequence of elements; a set is a collection that does not allow duplicates (and allows at most one null element), mirroring a mathematical set; and a queue is a collection designed for processing and usually orders its elements in some front or back ordering, such as First-in-First-out (FIFO), Last-in-First-out (LIFO), or by natural ordering established through a comparator (as with priority queues). 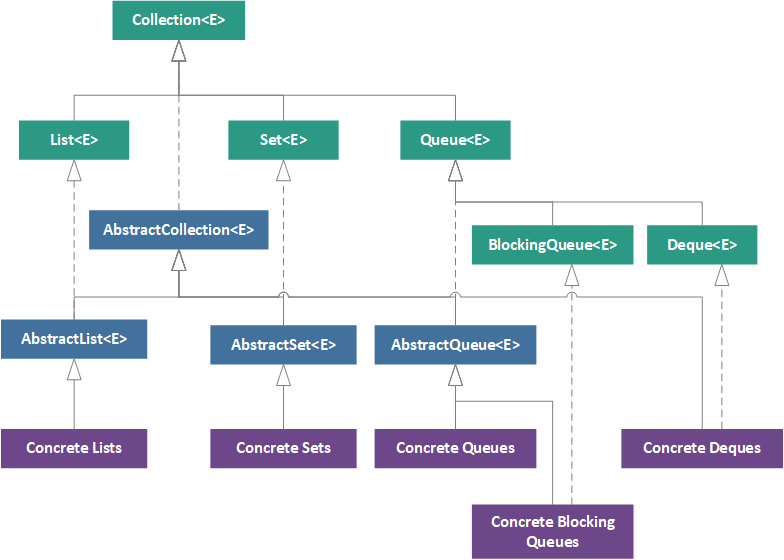 As we will see in future articles, each of these collection types introduces their own constraints and restrictions that allow them to more precisely define the behavior of a collection. For example, due to the ordered nature of lists, the List interface includes a method for random access. We will cover this feature, and all of the other idiosyncrasies of lists in the next article in this series.