The set is one of the most mathematical abstractions in the Java Collections Framework (JCF) and plays an integral role in numerous use cases, including status or state flags, unique collections, and ordered groups of unique elements. In order to support these various goals, the Set interface and its implementation classes include semantics that closely mirror the concepts and characteristics of set theory developed by Georg Cantor.

In this continuation of The Developer's Guide to Collections series, we explore the Set interface and its associated implementations, paying special attention to the mathematical underpinnings that the interface mimics. We also take a look at the hierarchy that turns the Set interface into workable and usable implementation classes. Lastly, we compare the advantages and disadvantages of each of the implementation classes and under what conditions each is best suited. In order to start this deep-dive, we must start with the most simple, yet fundamental aspect of sets in the JCF: Set theory.

The Concept of a Set

The concept of a set was first formalized by German Mathematician Georg Cantor in the late 1800s and is often called set theory. In mathematics, a set is a collection of unique elements, denoted by curly braces, such as A = {1, 2, 4}. If some value, a, is contained in the set A, a is considered an element or member of set A and is denoted with the symbols a ∈ A. In some cases, membership of a set is more informally referred to as an in relationship (i.e. a is in A). A set that contains no elements is called the empty set or null set and is denoted as {} or the symbol ∅ (i.e. an empty set, A, is A = {} or A = ∅). More formally, an empty set is a set, A, with a cardinality of zero: |A| = 0.

In summary, we have the following characteristics and operations for sets:

In the following section, we will translate these mathematical principles into the Set interface and explore the features common between the formal definition of a set and the Java Set interface.

The only method whose default implementation is redefined in the Set interface is the spliterator. As we saw previous in the List interface, this redefinition of the spliterator method is done in order to optimize the returned Spliterator for Set operations, rather than general-purpose collections. We will explore this default implementation in more detail in the following sections.

The main differences in the Set and Collection interfaces are found in the semantics of the mutation methods, such as add, addAll, removeAll, and retainAll. In standard collections, these methods simply add, remove, and retain elements in a collection, respectively. In a Set, these operations correspond to the binary set characteristics and operations described in the mathematical set concept. For example, adding an element into a Set that already exists does not change the set (the addition is not performed) since sets may only contain unique values.

This optional operation–one that is not required by an implementation and may throw an UnsupportedOperationException if the implementation does not support it–adds an element to the Set if a duplicate element is not already contained in the Set and returns true if the Set was altered (i.e. if the addition was successful). A duplicate element of element a is defined as any element, b, such that a.equals(b) returns true. If a duplicate of the supplied element exists in the Set, no addition is performed and the add method returns false. 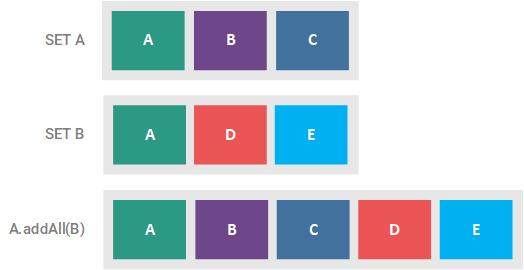 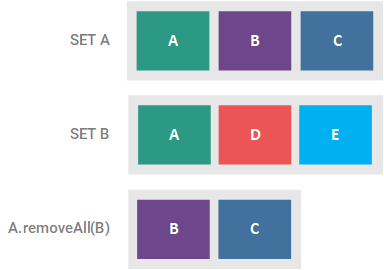 This optional operation retains only the elements present in the supplied Set, returning true if the Set is altered. If the supplied collection is a Set, this method effectively results in the intersection of the two sets. This intersection is illustrated in the figure below. 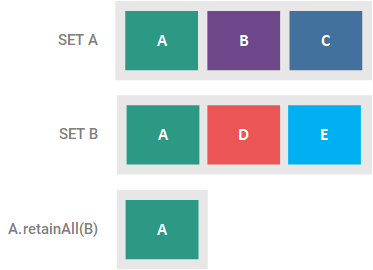 Spliterators are an involved topic and beyond the scope of this series. For more information, see the official Spliterator documentation.

The equals method of a Set is based on an element-by-element equality of two sets. Therefore, in order for an object to be equal to a Set, it must be a Set object or one that extends Set, must have the same number of elements as the Set, and each of its elements must match the elements of the Set. In a likewise fashion, the hash code for a Set is the sum of the hash codes of its elements, resulting in a hash code that the hash codes of two Sets, a and b, are equal so long as the two sets are equal (i.e. a.equals(b)).

In general, any method that adds an element to a Set ensures that no duplicates are added and that at any given time, all elements of a Set are unique. This amounts to a class invariant and is never disobeyed for the life of the Set. When supplied Set objects, the methods that operate on collections perform the binary set operations as follows:

In general, the specification for the Set class closely mimics that characteristics and operations for a mathematical set, while still implementing the standard Collection interface. 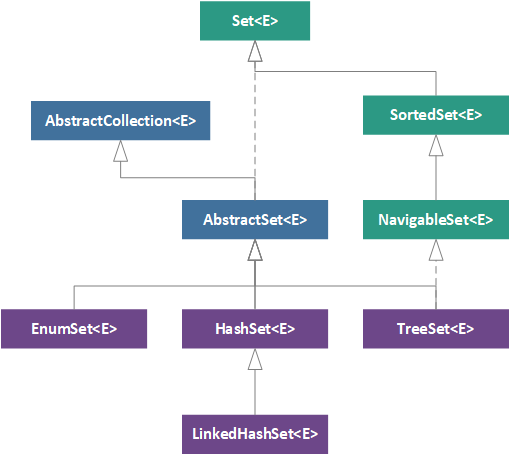 The SortedSet interface provides a total ordering of the elements, where each element is ordered relative to the other elements in the Set. This order is accomplished either through use of an explicit Comparator object or through natural ordering (if each element implements the Comparable interface). In order to support this ordering, the Iterator returned by classes that implement SortedSet will traverse the Set in ascending order, based on its stated order (i.e. either explicit Comparator ordering or its natural ordering). This interface also provides the following methods that allow for ordered access of the elements in the SortedSet:

The NavigableSet expands on this definition by providing methods that allow for clients to obtain the closest target to some search criteria. This interface provides the following methods to support this search-based access to a Set:

For all of these methods, if no element can be found matching the desired criteria, null is returned. With an understanding of the hierarchical structure that makes up the sets in Java, we can now look at some of the concrete implementation classes, along with their relative advantages and disadvantages, in greater detail.

The EnumSet class is a special purpose Set designed to support enumerations (enums). In many applications, there exists a need for some means of compactly representing flag values associated with some state. For example, if we create a typography or word processing application, we may want flags to denote if a specific set of text is bolded, underlined, or italicized. In many native applications (such as those written in C or C++), bit fields are used, where each desired flag is given a successive bit value (e.g. 0x01, 0x02, 0x04, etc.) and bitwise operations are used to set flags and masks are used to discover if certain flags are set.

While these types of flags are highly efficient, they are cumbersome and prone to errors. As an alternative, Java provides the EnumSet, which is created based on some number of enum constant values (which may include none or all) from an enum class and represents them as a bit vector. This internal representation is highly efficient and very compact, providing a high enough performance advantage to be suited for most flag-based use cases. An example of a possible use for the EnumSet is depicted in the listing below.

For the sake of comparison, we could implement the same logic in a similar manner using bit fields and bitwise comparison operations:

Although the bit field alternative may appear more compact, it is much less precise in its language. For example, we can provide any integer value as a style, not just enumerated styles (or an object that implements the Style interface). Additionally, the use of enums and the EnumSet allows for encapsulation of formatting logic and iteration over any number of styles, respectively. In the case of bit fields, we must check to see if each of the possible style values has been provided and format the supplied string accordingly.

A HashSet is simply a Set backed by a HashMap and permits null values while making no guarantees about the order of the elements in the Set. In general, the add, remove, contains, and size methods are executed in constant time (assuming a properly constructed hashCode method for the objects that represent its elements). In the case of iteration, the HashSet class is linear with respect to the sum of the number of elements and the number of buckets (or capacity). In order to tune a HashMap object, two options are provided:

In general, if the ordering of elements is not needed, the HashSet class provides the best overall performance and should be considered the default Set implementation used for unordered sets.

The TreeSet provides total ordering of its elements through either an explicit Comparator object or through natural ordering. Internally, this implementation is backed by a TreeMap which allows for elements to be ordered upon creation and iterated in order using its Iterator implementation. In general, this class provides log(n) performance for its add, remove, and contains methods and should be used when ordering of elements is required. In most other cases, a HashSet should be used. It should also be noted that this Set implementation rejects null values if natural ordering is used or if the explicitly supplied Comparator object does not support nulls.

The LinkedHashSet is a compromise between the unordered HashSet and totally ordered TreeSet. This Set implementation is backed by a linked list and ensures that its elements are iterated in order of insertion, with the most recent addition occupying the last location in the set. For example, if some element A was added to the set and then some element B was added, iterating through this set would result in A followed by B.

These insertion-ordered characteristics are important for clients that require that a Set implementation deterministically iterates over its elements. In general, the execution performance of add, remove, and contains is nearly that of a HashSet. Additionally, this Set implementation supports all optional operations and allows for null values to be added (at most one null value).

Sets are one of the more mathematical aspects of the JCF and have a number of very important use cases, including flag values (as formerly represented by bit fields) and as collections of unique elements. Although the mathematical characteristics of sets may seem orthogonal to the standard Collection interface methods, the JCF succinctly incorporates these formal concepts with its existing methods, resulting in a Set interface that does not add any additional methods to those inherited from the Collection interface. Its implementations also provide a useful array of features, including encapsulation of enum constants, constant-time performance, and ordering of elements. While sets are not the most widely used of the collection types, they play an important role in many precise use cases and should be in the toolbox of any experienced Java developer.