Excitement has set in for Formula One fans around the globe with the 2017/18 championship kicking off over the weekend and as an avid F1 fan myself, I am excited too.

So much so that I developed a retrospective game around the sport a while back and I'd like to share it with you.

The key part of Formula One this retro idea leverages is the Pit Stop. One of the most effective, efficient, and highly collaborative displays of teamwork you will ever see.

When we talk about the ultimate team, a Formula One Pit Stop crew is second to none. The entire process of an F1 car stopping and changing all 4 tires and then getting back out on the track takes the better part of 2 seconds. It takes some serious teamwork and synchronization to achieve this.

Overview of the Retrospective:

The retrospective covers the Set the Stage, Gather Data, Generate Insights, Decide What to Do, and Close the Retrospective structure; but I tend to perform the stages of the structure in a different order than that advised by Esther and Diana. This is not because Esther and Diana’s structure is not effective. On the contrary. I experimented here to get targeted and early focus on discussions when identical items start to appear throughout the Gather Data stage. As Agile teams focus on moving quick feedback loops through early discovery, I thought of introducing this slight tweak to Esther and Diana’s structure. What will this give you? Quick feedback loops on any identical items are instantly acquired as the team holds discussions and identifies potential actions out of these items. It is human nature to start problem-solving when a problem presents itself. By talking through it right there and then without waiting for the end of the Gather Data stage time box, I feel you get an even richer, more meaningful, targeted discussion and potential action items to tackle. One might say “but the Gather Data stage is probably only time boxed to 20-30 minutes. Can you not wait?” Again, Esther and Diana’s structure is spot on, but I’ve also found this permutation effective. Plus it gives a slight variation to the retrospective structure itself. 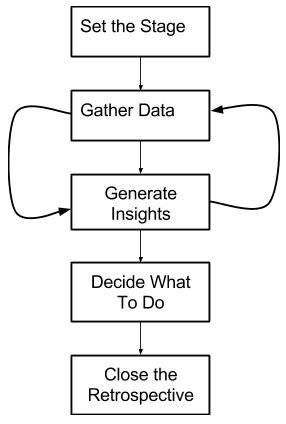 90 minutes (or adjust to the size of your team).

Make sure you have enough room for the team to have a whiteboard/magic chart to huddle around for pit stops.

If your team is distributed, you will have the added complexity of choosing a good collaboration tool that works for the team. I would recommend not experimenting with this retro while using a new collaboration tool because this retro is fully facilitated by the team, so everyone taking part is important.

Give the team a very quick context on Formula 1 (for the benefit of team members who don't follow it). Focus on the Pit Stop!

Team nominates a Team Principal. A Team Principal is the owner of prompting the team about potential action points to be noted for later discussion. She/he is also responsible for time boxing and helping the team focus the conversation without digressing.

The team nominates a Race Technical Director to call a Pit Stop when data generation identifies 2 or more identical groupings of data in the Gather Data stage.

Time box each of the stages below as appropriate for the team, but for the Gather Data and Generate Insights, time box them together and give it a fairly large time box.

If the team is not mature enough, the Scrum Master can play the role of Team Principal and team members will observe.

[Assumptions]: You've reviewed with the team the retrospective actions from the last Sprint that were incorporated into the work performed during the Sprint. Anything else you perform at the beginning of your retro, including reiterating to the team the retro is not a blaming exercise, is done before kicking this off.

Start with setting the scene and introducing this retro and explaining the rules. Prepare a game to warm the team up and to disconnect them from work mode (Team Principal activity).

The team starts to discuss how the Sprint went and starts to add stickies to the whiteboard. The team's Race Technical Director should also be keeping an eye out for identical items in this data gathering phase (team activity).

As soon as there appear to be identical items raised by team members, the Race Technical Director will call PIT STOP! When Pit Stop is called, the team will huddle around the post-it notes on the wall chart/whiteboard and discuss the identical grouped items to understand more, i.e. how is this impacting the team (be it negative or positive)? Discuss if there's a potential action item here. If there is a potential action, it doesn't mean you have to take it into the next Sprint, but simply that you should make a note of the actions which will then be prioritized by the team at the end of Retro (Decide What to Do stage). [Team activity]

Loop these two stages until time box is over (Team Principal to keep an eye on time box).

Decide What to Do:

The team then huddles around the listed action items post-it notes and starts prioritizing the list, and agreeing on items to take into the next Sprint to work on and improve. Add the remaining actions that will not be incorporated into your next Sprint to your team’s improvement backlog. (Team nudged by Team Principal as time box keeper).

End the retro with another game or something fun so the team ends on a high note.

Published at DZone with permission of Kwasi Owusu-Asomaning. See the original article here.