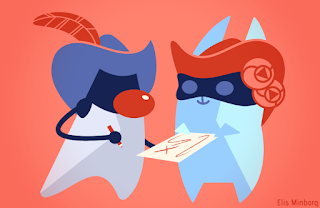 When I was a Java newbie, I remember thinking that there should be a way of removing or hiding methods in my classes that I did not want to expose. Like overriding a public method with a private or something like that (which of corse cannot and should not be possible). Obviously today, we all know that we could achieve the same goal by exposing an interface instead.

By using a scheme named Alternating Interface Exposure, we could view a class' methods dynamically and type safe, so that the same class can enforce a pattern in which it is supposed to to be used.

Let me take an example. Let's say we have a Map builder that can be called by successively adding keys and values before the actual Map can be built. The Alternating Interface Exposure scheme allows us to ensure that we call the key() method and the value() exactly the same number of times and that the build() method is only callable (and seen, for example in the IDE) when there are just as many keys as there are values.

The Alternating Interface Exposure scheme is used in the open-source project Speedment that I am contributing to. In Speedment, the scheme is for example used when building type-safe Tuples that subsequently will be built after adding elements to a TupleBuilder. This way, we can get a typed Tuple2<String, Integer> = {"Meaning of Life", 42}, if we write TupleBuilder.builder().add("Meaning of Life").add(42).build()

I have written about the Builder Pattern several times in some of my previous posts (e.g. here) and I encourage you to revisit an article on this issue, should you not be familiar with the concept, before reading on.

The task at hand is to produce a Map builder that dynamically exposes a number of implementing methods using a number of context-dependent interfaces. Furthermore, the builder shall "learn" its key/value types the first time they are used and then enforce the same type of keys and values for the remaining entries.

Here is an example of how we could use the builder in our code once it is developed:

In the code above, once we start using an Integer using the call key(1) , the builder only accepts additional keys that are instances of Integer. The same is true for the values. Once we call value("one"), only objects that are instances of String can be used. If we try to write value(42) instead of value("two") for example, we would immediately see the error in our IDE. Also, most IDEs would automatically be able to select good candidates when we use code completion.

Let me elaborate on the meaning of this.

The builder is created using the method Maps.builder() and the initial view returned allows us to call:

Once the initial key(K key) is called, another view of the builder appears exposing only:

Note that the build() method is not exposed in this state, because the number of keys and values differ. Writing Map.builder().key(1).build(); is simply illegal, because there is no value associated with key 1.

Here are the two alternating interfaces that the builder is using once the types are decided upon:

We see that the implementing class implements both of the alternating interfaces but only return one of them depending on if key() or value() is called. I have "cheated" a bit by created two initial help classes that take care about the initial phase where the key and value types are not yet decided. For the sake of completeness, the two "cheat" classes are also shown hereunder:

These latter classes work in a similar fashion as the main builder in the way that the InitialKeyBuilder returns a InitialValueBuilder that in turn, creates a typed builder that would be used indefinitely by alternately returning either a KeyBuilder or a ValueBuilder.

The Alternating Interface Exposure scheme is useful when you want a type safe and context-aware model of your classes. You can develop and enforce a number of rules for your classes using this scheme. These classes will be much more intuitive to use, since the context-sensitive model and its types propagate all the way out to the IDE. The schema also gives more robust code, because potential errors are seen very early in the design phase. We will see potential errors as we are coding and not as failed tests or application errors.