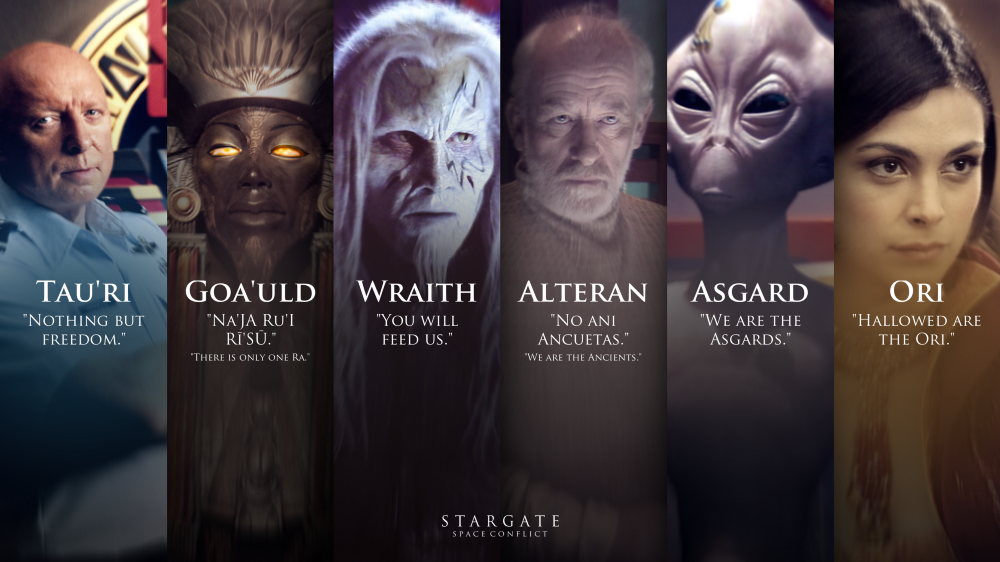 The Alteran — Our Agile Founding Fathers

The Alteran are maybe the species that are the simplest to link to our Agile "Universe".

I hoped to find founding mothers of Agile; however, there was no one in that famous retirement Chalet and while browsing the agile literature I can only think of Mary Poppendieck as a major female figure close to the foundations of agility.

As for the Alteran, they are called "The Ancients", and described as the founders of Atlantis according to the TV-show. This is why it is easy to make the connection between them and our agile manifesto co-authors, plus some others like Taiichi Ohno, Anderson, et al. With the manifesto they established a baseline, much like the Alteran built stargates, to make organizations a better place and enabling collaboration. They still exist, but they are slowly fading, drowned under the noise that the other species are doing. I believe we can all relate that to our Universe and the noise, or plethora, of name dropping framework and approaches we can find nowadays.

They are also allegedly taking a step back as they are exhausted from what they built and their desire to let their Universe evolve, which would be in line with the self-organizing paradigm we see emerging in some organizations, and in agility itself.

This is maybe the most difficult link I had to make between the two universes. The Asguardian are very efficient and smart beings. They are very technologically advanced, but lack the numbers and are on the demographic decline in the famous TV show.

These traits made me choose the six-sigma or lean people as their constant search for mathematic efficiency is putting them in a corner. I wonder if it's either because statistics seem too advanced for many people, or simply because Scrum, Kanban, and others are taking the biggest shares of the spotlight.

As with Asguardian, it can also be that they are just in another league altogether, trying to create bridges only to the most worthy.

Well, it was easy. Not the most loved species in the TV-Show (far from that, in fact) the Tau'ri awaken them when Atlantis, which was finally a city spaceship, found its origin point. It's almost the same situation with agility. They are not the most loved, mostly "banned" but the number of PMPs or Prince2 certified project managers is incredible. They still are present in many organizations, as are the Wraiths, with their ability of high longevity. They are well equipped and in numbers, but in a way they are fighting to survive. And to do so, the Wraith are doing whatever it takes to keep feeding and are looking for fresh blood.

Edit : A part of the article was edited which was explaining the "new excuse to survive" from the Wraith/Waterfall duo.

PMI just bought Disciplined Agile in August 2019, we have to see if they will "sucked them" to the bones and make DA disappear or if they will be able to bring some fighting capabilities in the Scaled Agile market.

I had difficulty in finalizing my choice for representing the Goa’uld in our Agile Universe. While Scrum is powerful in specific cases, it was unfortunately forced on many teams and used by the organizations as a way to say "we are now doing agile". This would relate to the enslaving of the Goa'uld. As for the elitism, you can find a part in the Scrum Guide itself when stating "if you are not doing what’s described in the guide, you are not doing scrum", and when discussing with purists. Organizations are not black and white, and neither is agility. That's why you had Tok'ras in Stargate, Goa'uld fighting Goa'uld and why, maybe, you now have PSK (Profesionnal Scrum with Kanban) available within one of the biggest Scrum organization. Speaking of, this could also relate to the system Lords you could find within the different Goa'uld. And Scrum Masters being just Jaffas, enforcing the Guide...

Like the Goa’uld, Scrum is powerful and can bring riches — but at what cost? Our free will?

Which brings us to our last two contenders!

“They are a group of “ ascended” beings who use their advanced technology and knowledge of the universe to attempt to trick non-ascended humans into worshipping them as gods.” — Wikipedia

In Stargate, the Ori caught the Tau'ri by surprised, seeming almost inoffensive as first until being the strongest foe they were fighting against. This is what happened in our Agile universe. At first, SAFe was just another scaling framework emerging, up until it became the "key" for many organizations to transform themselves. A recipe of some sort, a magical wand for others, oh they couldn't be more wrong.

I do have a strong position on SAFe and yes, it is reflected in this description. But, like Wikipedia's definition, I believe the keywords are "to trick non-ascended humans into worshipping them as gods". SAFe is a way to do agile at scale, I can acknowledge that much, but this is not the best way for many, many organizations. You need to be ready to transition from a project-centric organization to a product and consumer-centric organization.

Like the Ori who is looking for worshippers in masses, SAFe marketing even managed to convince non-agile organizations to do a̶g̶i̶l̶e̶ SAFe.

This is where I wonder how coaches and agile companies (consulting and others) can bow their heads, close their eyes, and become SAFe apostles without fighting. What kind of tricks do they use?

Shouldn’t you scale when a cultural shift is at least started (so from top-down) in organizations where people are mastering or close to master either or both Scrum and Kanban (among others options)?

What are the miracles they promised, which drive crazy the organizations to the point of doing SAFe just because it is the trend? For consultancy organizations, is it just because the customer wants it even if it's not what he needs?

As the motto for this Stargate species state, there are people fighting for freedom, for free will in the Stargate Universe. In our Agile Universe, some call themselves agnostic (AA) while others just don’t call themselves anything. They are just doing it.

When you read the famous “The Phoenix Project” book (and I recommend you to do so if you haven't yet), you can sense that the agility in Parts Unlimited was nurtured, grown from within. I believe this is the most powerful agile you can do. Not the one that is pushed to an organization through a recipe that worked somewhere else and then should be applied everywhere (for that matter the Spotify guys were specifically telling not to do so!). The Tau’ri were efficient in liberating people using their own strengths and acquiring bits of the other species' technology so they could use the best of everyone.

I also believe being a coach, an agile coach, is being a Tau’ri. You must be aware of all the other species, know their strengths and weaknesses, either from within or by experience. You must fight for and help organizations discovering their own path, build their own agility even if that means using tools from the Goa’uld or the Ori for instance. You should never fall for them.

Today, however, the Ori seem to win, as you can find organizations telling you “we will not recruit you due to your dislike of SAFe”. This is infuriating. As much as the Stargate Universe exists thanks to all these species, the Agile Universe exists thanks to all our beliefs and stances, but a balance between all them must be maintained, we, as coaches are this balance. Don't let us down.

So coaches, where does your allegiance lie?

It makes me wonder who the replicators are…

Published at DZone with permission of Eric Wursteisen. See the original article here.