Automation and cross-functional collaboration are two fundamental features of a DevOps model. As one of the core components of a DevOps framework, continuous integration and continuous delivery (CI/CD) pipelines speed up application delivery by automating various stages of the software development lifecycle. Although Kubernetes inherently automates the delivery, scaling, and management of applications by deploying and orchestrating them in flexible, portable containers, adopting a CI/CD-based workflow brings a plethora of additional features by offering an iterative cycle of configuration merges and testing.

In this article, we discuss CI/CD approaches in a Kubernetes ecosystem, best practices for implementing an efficient CI/CD framework, and popular open-source CI/CD tools.

CI/CD Pipelines in a Kubernetes Ecosystem 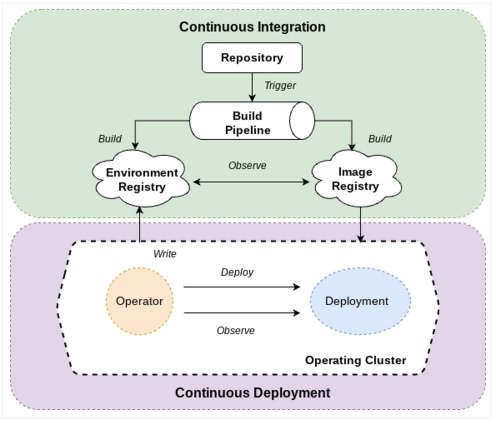 Kubernetes supports two approaches to implement a CI/CD pipeline that essentially define how configuration changes are implemented in a workflow. These include pull-based pipelines and push-based pipelines.

To help further understand how a pull-based CI/CD pipeline can support your cloud-native workloads, let us learn some of its advantages and disadvantages:

This is an agentless pipeline architecture that uses an external system to trigger deployments. In a push-based pipeline, configuration changes are committed in a repository, which then updates the environment by adding commits to a pipeline that was already successfully executed.

In spite of its quick implementation and popularity, organizations should assess a push-based pipeline's use cases before choosing it for their cloud-native workloads. Listed below are some of its advantages and disadvantages:

Detecting errors and defects during early stages of a workflow helps enhance application agility. As a recommended design, the test environment should match the production environment to streamline the build, test, and deploy cycles across different environments. Continuous, automated testing also helps create sustainable application builds that ensure the code is readable, debuggable, and maintainable.

Since a CI/CD pipeline may have multiple builds deployed simultaneously, it is crucial to have an automated validation process to track points of failure in large-scale deployments. With appropriate validation, the pipeline integrates code changes seamlessly, thereby reducing vulnerability detection overhead.

Rollbacks ensure code sanity by restoring a previous, stable deployment if there are flaws with a new commit/version. As one of the most critical considerations of designing a workflow, it is important to adopt a planned roll-back strategy that safeguards the availability of workloads in production.

Benefits of CI/CD Pipelines in a Kubernetes Ecosystem

Open-source CI/CD tools are known to offer flexibility in the deployment, scaling, and management of workloads in Kubernetes CI/CD pipelines. While organizations often tend to adopt the most popular platforms, it is imperative to analyze business and technical requirements before choosing one. Some popular open-source CI/CD tools include Spinnaker, Jenkins X, and Argo CD:

Although approaches toward adoption of a DevOps model may differ with varying use cases, let's discuss some commonly recommended practices for implementing efficient Kubernetes CI/CD pipelines.

Developers should diligently choose the appropriate version of Kubernetes as this further defines the choice of CI/CD tools and methodologies. Depending on the complexity of workloads deployed, developers should also be sure to choose the ideal setup between managed, self-hosted, cloud-based, or on-premises since these influence critical aspects of a CI/CD workflow including scaling, security, and cost.

GitOps is a modern integration workflow that ensures predictability, visibility, and ease of use. Using a single source of truth simplifies CI/CD-based application delivery and infrastructure control, while streamlining code integration and eliminating redundancy.