With the advent of cloud automation technology, infrastructure as code (IaC) obtains the ability to turn complex systems and environments into a few lines of code that can be deployed even at the click of a button. This new IT infrastructure also automated dev/test pipelines, which provide a rapid feedback loop for developers and rapid deployment of new features for end-users.

The above facts indicate the core best practices of DevOps — like virtualized tests, version control, and continuous monitoring — come to the underlying code, which governs the formation and administration of your business infrastructure. In another way, you can also say infrastructure will be considered the same way that any other code would be.

As the name suggests, Infrastructure as Code is a type of IT infrastructure provisioning process for business applications, providing the required agility for workflow. This is the concept of managing your operations environment in the same way organizations build applications or other code for general release.  IaC has made the entire process faster and more reliable by using the same rules and structures that govern code development, rather than making configuration changes manually or using one-off scripts to adjust infrastructure — particularly when new server instances spun up.

The Director of evangelism at StackEngine says the thought of IaC is beyond any other single thing that has enabled the cloud revolution, because a single ops person can start 100 machines at the press of a button, and they can also be configured properly. Infrastructure as Code has also leveraged the cloud paradigm and disposability of cloud machines. 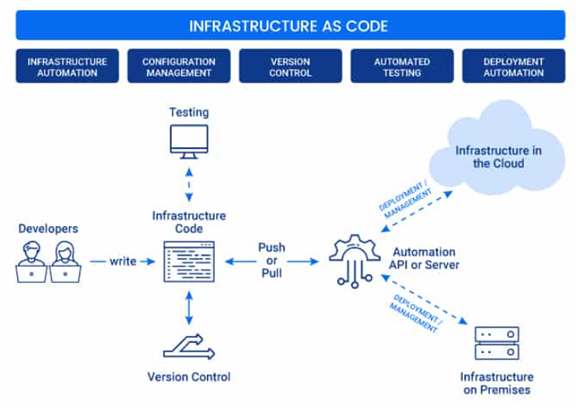 Challenges that Can Be Managed Using Infrastructure as Code

The old-school approach of managing IT infrastructure manually was bundled with challenges. The problems would be augmented as the amount of infrastructure around us grows.

Organizations are managing an expansive infrastructure to meet modern-day IT needs which leads to critical problems like high expenditure. The modern IT infrastructure includes a few complex requirements starting from maintaining a team of technicians such as hardware maintenance and network engineers to setting up and managing data centers, which translate into astronomical costs.

Secondly, the system administrator faces the slow and often tedious process of manual configuration that hampers the speed of availability and scalability. System administrators would have to hurry to handle the load, with every spike in access or surge in peak loads. This not only affects the velocity of access but also widens the risk of applications being presented unavailable for long stretches.

All these problems can be handled with a single code base applying IaC. Infrastructure as Code has opened this space for developers to write the code to provision infrastructure in a familiar language. It follows the same life cycle as a standard software development life cycle.

For a long time, DevOps involved doing exactly that by fostering a high degree of collaboration across the whole IT value chain (from business to development, operations, and IT infrastructure). But there is a problem.

While many software development and tech operation teams step towards the DevOps method, many enterprises' IT infrastructure organizations still follow a “plan-build-run” operating model organized by siloed infrastructure components, including network, storage, and computing. The result? When new or updated applications are ready for hosting on existing IT infrastructure, Agile development teams slam into a bottleneck, where norm based on ticket management is still the highest manual process.

Infrastructure as Code is the key enabler of the DevOps revolution, making all those constraints much easier. Now the point is how organizations could apply IaC in DevOps to assure business agility and better infrastructure.

IaC is meaningless for the DevOps team without tools. Below we have mentioned a few infrastructures as code tools commonly used by the DevOps community to direct you on the right path.

Amazon has introduced CloudFormation tools enabling teams to define templates representing software stacks and automatically deploy them to cloud environments. The configuration orchestration tool enables you to code your infrastructure to automate your deployments. CloudFormation allows you to spin up anything from a single EC2 machine to a complex application applying multiple AWS services. You can check into version control through simple text files as templates are in a simple and human-readable format.

How the Tool Works:

Azure Resource Manager is the central mechanism of Azure for automating cloud resources. Azure provides a simple declaration template syntax that grants direct access to this automation engine by ensuring systems are set up exactly as they were installed using the Azure console or CLI.

There are simple steps for IaC using Puppet:

By using Infrastructure as Code and Puppet you can configure each server in the same way, and you can also be sure they stay in the correct state. This is especially important when you must maintain numerous servers.

Terraform is accumulating its configuration files and creating a new deployment plan by working together with tools like Chef or Puppet that show how to adapt the current infrastructure to reach the desired state. Starting from machines, storage, and networking to fine-grained application features and DNS configurations, it manages everything. Cloud APIs can be codified into declarative configuration files by terraforming. Here are the 3 simple steps using the tool.

Ansible helps you to automate all your infrastructure from bare to the desired state. It comes under GNU (General Public License) and is written in Python. We can define the set of commands in pre-defined syntax often referred to as Playbook. It uses both imperative and declarative approaches and the push method. 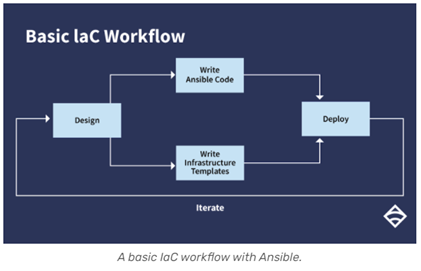 It is one of the popular configuration management tools and comes under an Apache License. It is written in Ruby and Erlang. Chef Automates the process of deployment and converts it into code. It uses an imperative approach and pulls method. 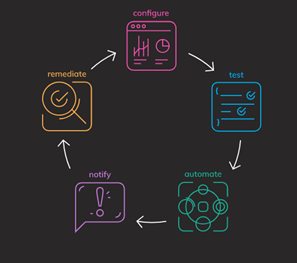 Chef Infra builds upon the principles of test-driven development and idempotency, which is different from other configuration solutions. Organizations can do application change testing and system configuration in parallel. Hence, system states are easily enforced and monitored across all infrastructure and teams. Chef Infra allows users to apply configurations across mixed fleets of Linux, Mac, and Windows systems, regardless of OS version and architecture by defining them once.

Chef makes your systems testable, portable, and auditable. The configuration tools give your teams the freedom to focus on building innovations, rather than on solving problems that have already been solved in the past.

All these tools have different languages and structures and configuration options. Next-gen IaC should be homogeneous and standardized. Standardization of infrastructure configuration helps to reduce human error. This also controls infrastructure provisioning by a centralized source. The overall centralization process makes code integration through CI/CD pipeline much easier. Through this process, you also gain the ability to adapt to infrastructure quickly.

IaC Solutions: DevOps Before and After

IaC allows teams to create consistent, stable systems that can easily be reproduced and deployed in development, testing, and production environments.

The following table summarizes the difference between ops work before and after Infrastructure as Code.

Simply we can say, IaC is a framework of proven coding techniques that extends to your infrastructure directly, it is also effectively blurring the line between "what is an application" and "what is the environment." This is quite similar to what DevOps is doing with the staff in charge of these two worlds, melding developers, and operations staff into a single entity with a name.

"Infrastructure as code" is now becoming as catchy as "DevOps in the next-gen technology world." In the near future, it will change the business IT infrastructure.