Organizations are rapidly moving towards cloud adoption. They are also looking at microservices and an agile way of development, deployment, and testing. With such rapid adoption, large organizations are facing many challenges. In large organizations, generally, there are multiple projects running simultaneously. All these projects would typically have a large number of microservices. This results in hundreds of microservices being under development and a number of individuals and teams with varying degrees of skills, expertise, and experience working on those.

The first thing that companies complain about is the lack of proper tagging. With so many microservices being developed, it becomes impossible to trace them without proper tagging. Allocating costs to different projects is also done with the help of tags. Project names, application names, and environment names like DEV, QA, etc., among others, go a long way in managing resources on the cloud better.

Another issue that frequently comes up in discussions is the lack of standardization. For example, teams often don’t follow standard naming procedures. They might include project names or application names while naming resources, but these are generally not standard across all projects in an organization. Someone would prefix the project name to their resources, while another individual or team might postfix the project name. Then there’s the problem of code libraries. Teams typically tend to use different versions of JDK. Also, if spring-boot is being used, the version is definitely not the same for all current systems under development. This poses a huge challenge in managing and monitoring resources on the cloud and providing ongoing support.

Developers are usually protective about their code and tend to go easy with unit testing. But the worth of unit testing cannot be undermined in any way. A well-constructed unit testing suite goes a long way in eliminating the risk of potential regression defects. So, there must be a way to enforce unit testing and measure coverage.

The other questions are about automation. Can we automate parts of the development? Also, what is the best way to build and deploy my services?  It generally takes a considerable amount of time to build the foundation, develop deployment scripts, and create CI/CD pipelines.

Developing a utility tool that would create microservices and take care of the deployment is an excellent solution to the above challenges. This can be used as a command line tool or can be uploaded and distributed through AWS Service Catalog. The next section outlines a reference architecture and the steps for creating and using such a tool.

The utility tool is a one-click solution that would generate the structure of a microservice, create all necessary resources on AWS along with a CI/CD pipeline, commit the skeleton code and deploy onto ECS post a successful build. It’s a command line tool that takes the project, application, and service names as input and auto-generates everything else. The following diagram outlines the architecture and the event flow of the system. 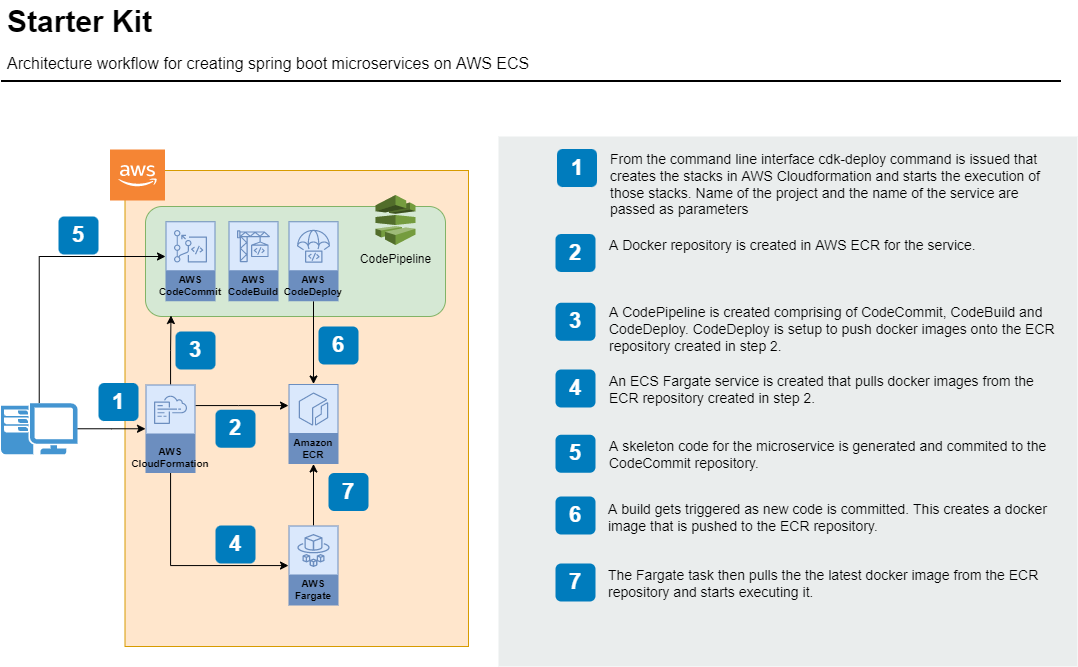 The solution has two parts to it. The first part of the solution is generating the skeleton spring-boot project. For this part, the maven archetype is used. It generates the structure of the project, complete with proper method signatures along with request and response classes. It also generates associated unit test classes. The generated code results in a clean build. Going forward, failure of unit tests or a low coverage will result in a failed build.

The second part is to create the required AWS resources. For this, AWS Cloud Development Kit (CDK) is leveraged. CDK is an infrastructure as code (IAC) offering from AWS. It helps to define infrastructure using code and then provision them through Cloudformation stacks. Here CDK is used to create a CodePipeline comprising of CodeCommit, Codebuild, and CodeDeploy, an Elastic Container Repository (ECR), and an Elastic Container Service (ECS) with Fargate provisioning. All resources that are created follow the same standards. They are properly tagged with values for the project name, application name, etc.

Once the tool executes successfully, the code is available in the code repository, an initial build has been done, and the corresponding docker image has been pushed into ECR. The image is deployed onto an ECS Fargate instance and can be accessed from external or internal clients. Developers can now go in and start putting business logic in the skeleton code without being concerned about anything else.

With the growing need for managing and monitoring microservices on the cloud, it becomes imperative for organizations to enforce standardizations across the board.  Also, some teams are familiar with microservices development but not so familiar with cloud technologies. There is thus a constant lookout for tools and techniques that would get teams up and running with microservices development in the minimum possible time. This is a powerful utility tool with huge benefits. CDK is a great tool that facilitates AWS native development. The starter kit has abundant potential and can be extended to other development scenarios. For example, this can be used to create Lambdas in a similar way. This can also be used to build the entire network, including VPCs, subnets, and associated routes.