Jakarta EE is a unanimously adopted and probably the most popular Java enterprise-grade software development framework. With the industry-wide adoption of microservices-based architectures, its popularity is skyrocketing and during these last years, it has become the preferred framework for professional software enterprise applications and services development in Java.

Jakarta EE applications used to traditionally be deployed in run-times or application servers like Wildfly, GlassFish, Payara, JBoss EAP, WebLogic, WebSphere, and others, which might have been criticized for their apparent heaviness and expansive costs. With the advent and the ubiquitousness of the cloud, these constraints are going to become less restrictive, especially thanks to the serverless technology, which provides increased flexibility, for standard low costs.

This article demonstrates how to alleviate the Jakarta EE run-times, servers, and applications, by deploying them on AWS Serverless infrastructures.

As documented in the User Guide, AWS Fargate is a serverless paradigm used in conjunction with AWS ECS (Elastic Container Service) to run containerized applications. In a nutshell, this concept allows us to:

Running containers with AWS ECS requires handling a so-called launch type (i.e. an abstraction layer) defining the way to execute standalone tasks and services. There are several launch types that might be defined for AWS ECS-based containers, and Fargate is one of them. It represents the serverless way to host AWS ECS workloads and consists of components like clusters, tasks, and services, as explained in the AWS Fargate User Guide.

The figure below, extracted from the AWS Fargate documentation, is emphasizing its general architecture: 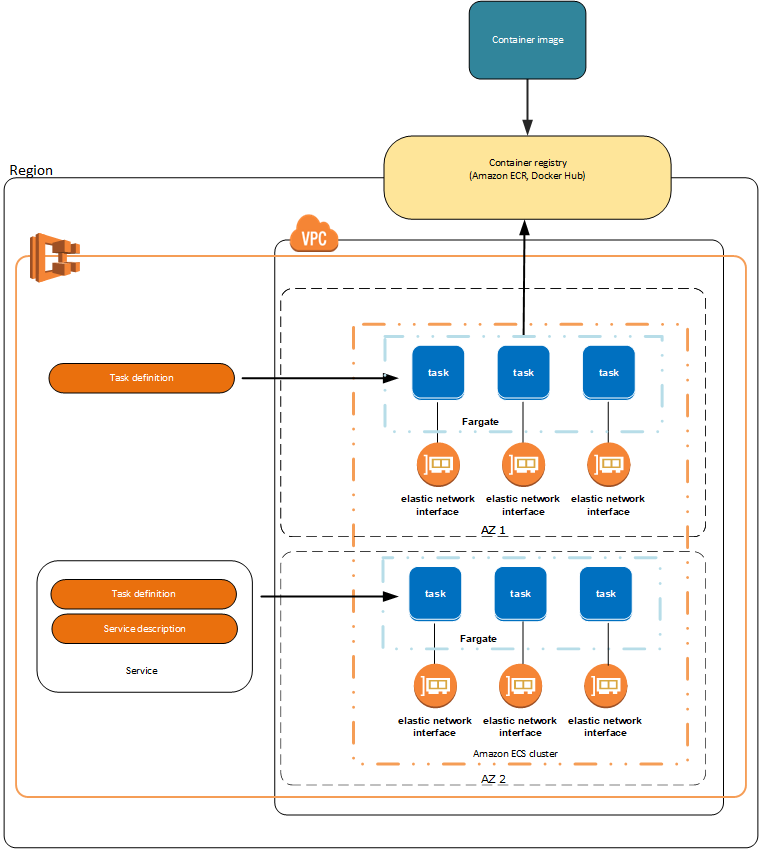 As the figure above shows, in order to deploy serverless applications running as ECS containers, we need a quite complex infrastructure consisting in:

Now, if we want to deploy Jakarta EE applications in the AWS serverless cloud as ECS-based containers, we need to:

The AWS console allows us to perform all these operations in a user-friendly way; nevertheless, the process is quite time-consuming and laborious. Using AWS CloudFormation, or even AWS CLI, we could automatize it, of course, but the good news is that we have a much better alternative, as explained below.

Using AWS Copilot, developers can easily manage the required AWS infrastructure, from their local machine, by executing simple commands which result in the creation of the deployment pipelines, fulfilling all the required resources enumerated above. In addition, AWS Copilot can also create extra resources like subnets, security groups, load balancers, and others. Here is how.

Installing AWS Copilot is as easy as downloading and unzipping an archive, such that the documentation is guiding you. Once installed, run the command above to check whether everything works:

The first thing to do in order to deploy a Jakarta EE application is to develop and package it. A very simple way to do that for test purposes is by using the Maven archetype jakartaee10-basic-archetype, as shown below:

This Maven archetype generates a simple, complete Jakarta EE 10 project with all the required dependencies and artifacts to be deployed on Payara 6. It generates also all the required components to perform integration tests of the exposed JAX-RS API (for more information on this archetype please see here). Among other generated artifacts, the following Dockerfile will be of real help in our AWS Fargate Cluster setup:

Now that we have our test Jakarta EE application, as well as the Dockerfile required to run the Payara Server 6 with this application deployed, let's use AWS Copilot in order to start the process of the serverless infrastructure creation. Simply run the following command:

The process of the serverless infrastructure creation conducted by AWS Copilot is based on a dialog during which the utility is asking questions and accepts your answers.

Next, AWS Copilot is looking for Dockerfiles in the local workspace and will display a list from which you have either to choose one, create a new one, or use an already-existent image, in which case you need to provide its location (i.e., a DockerHub URL). We choose the Dockerfile we just created previously, when we ran the Maven archetype.

Now, all the required information is collected and the process of infrastructure generation may start. This process consists in creating two CloudFormation stacks, as follows:

In order to check the result of the execution of the AWS Copilot initialization phase, you can connect to your AWS console, go to the CloudFormation service, and you will see something similar to this:

As you can see, the two mentioned CloudFormation stacks appear on the screen copy above and you can click on them in order to inspect the details.

AWS Copilot starts by asking us what name we want to give to our development environment and continues by proposing to use either the current user default credentials or some temporary credentials created for the purpose. We choose the first alternative.

This operation may take a significant time, depending on your bandwidth, and, once finished, the development environment, named jakarta-ee-10-app-dev, is created. You can see its details in the AWS console, as shown below: 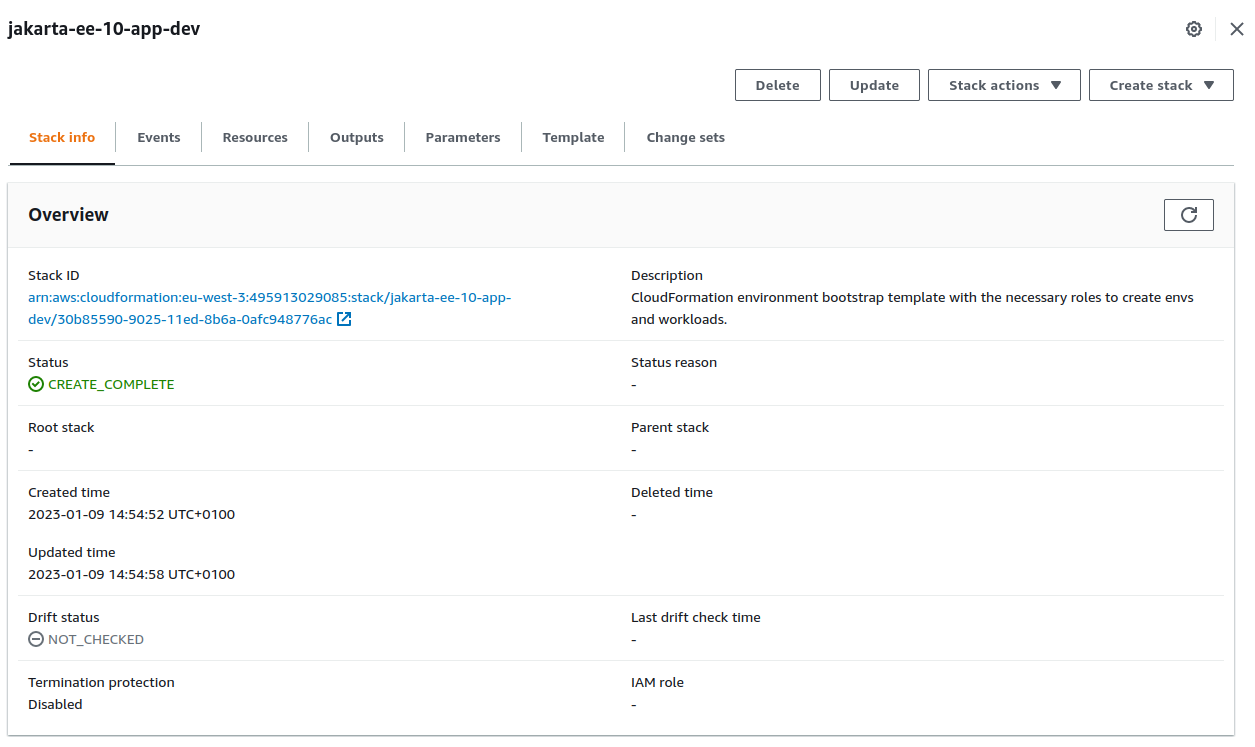 Notice that the environment creation can be also performed as an additional operation of the first initialization step. As a matter of fact, the copilot init command, as shown above, ends by asking whether you want to create a test environment. Answering yes to this question allows you to proceed immediately with a test environment creation and initialization. For pedagogical reasons, here we preferred to separate these two actions.

The next phase is the deployment of our development environment:

The CloudFormation template created during the previous step is now executed and it results in the creation and initialization of the following infrastructure elements:

Take some time to navigate through your AWS console pages and inspect the infrastructure that AWS Copilot has created for you. As you can see, it's an overladen one and it would have been laborious and time-consuming to create it manually.

The sharp-eyed reader has certainly noticed that creating and deploying an environment, like our development one, doesn't activate any service to it. In order to do that, we need to proceed with our last step: the service deployment. Simply run the command below:

The listing above shows the process of creation of the whole bunch of the resources required in order to produce our serverless infrastructure containing the Payara Server 6, together with the test Jakarta EE 10 application, deployed into it. This infrastructure consists of a CloudFormation stack named jakarta-ee-10-app-dev-lb-ws containing, among others, security groups, listeners, IAM roles, dedicated CloudWatch log groups, and, most important, an ECS task definition having a Fargate launch type that runs the Payara Server 6 platform. This way makes available our test application, and its associated exposed JAX-RS API, at its associated public URL.

You can test it by simply running the curl utility:

Here we have appended to the public URL our JAX-RS API relative URN, as displayed by AWS Copilot. You may perform the same test by using your preferred browser. Also, if you prefer to run the provided integration test, you may slightly adapt it by amending the service URL.

Don't hesitate to go to your AWS console to inspect the serverless infrastructure created by the AWS Copilot in detail. And once finished, don't forget to clean up your workspace by running the command below which removes the CloudFormation stack jakarta-ee-10-app-lb-ws with all its associated resources: