If you are looking to venture into the DevOps market, it’s essential to be well informed about the state of the market. Most importantly, you need to know the difference in DevOps Engineers’ salaries in the US for entry-level salaries and how wages grow with years of experience. Apart from that, you also need to choose which of the three certifications (AWS, GCP, and Azure) may set you on the road to a well-paying career.

In this article, we explore all you need to know about the salary range for AWS DevOps Engineers looking to work in San Francisco, California.

What Is Amazon Web Services (AWS)?

The visionary Amazon has had success since the launch of its Amazon Elastic Compute Cloud in August 2006. Amazon’s success partly owes to the fact that competitors such as Google, Microsoft, and IBM took several years to develop their cloud computing products. As a result, Amazon enjoyed a large and undisputed market share for several years. However, it did not stop there. As the years rolled by, Amazon carefully laid out a plan to grow Amazon EC2 into what would become AWS's huge success today.

Essentially, Amazon was able to see an opportunity that nobody else saw. In giving tools, applications, and certification programs, amazon was the first cloud service provider to offer tools every company, organization, or startup wanted. However, working with AWS can be challenging compared to other big cloud providers. This explains why most people new to DevOps are less inclined toward investing in AWS.

The low affinity to AWS  has to do with the way AWS menus and interface were structured. But, Amazon has been working hard for years to improve its UI to provide users with a simple experience. Nonetheless, for new and old developers, AWS is especially interesting because it has the most advanced and refined features being the oldest of the cloud providers, helping develop solutions and deal with the vast majority of situations.

How Does AWS DevOps Engineer Salary Compare With GCP and Azure?

Entry-level developers trying to get into the DevOps market need to be well-informed, even though the skills in security, analysis, and programming, are necessary for this industry. In addition, beginners need to understand how competitive DevOps salaries are to choose the most relevant cloud certification to go for, as time may not allow mastery of multiple technologies.

Stack Overflow Jobs collect data from developers and companies globally on an annual basis to estimate the range of salaries in the DevOps market. This research aims to help both employers and job seekers understand the salary dynamics in this sector. The information from Stack Overflow Jobs concerning DevOps Engineers' salaries usually focuses on the three most prominent Cloud Service Providers: AWS, Google Cloud Platform (GCP, and Azure. The salary range changes based on one’s experience, on a scale of 0 to 10 years.

The data in our table is based on developers with at least one AWS, GCP, or Azure certification, in the 50th percentile of DevOps Engineers, with a bachelor's degree in IT, and located in San Francisco, United States.

We have prepared a graphic for AWS DevOps engineers to visualize how salaries grow as years of experience accumulate. This graph is based on the 50th percentile of professionals working in San Francisco, United States, holding an AWS certification and a bachelor's in an IT area. AWS is probably the hardest of the three to get into, and the most experienced professionals are already working on it for years.

However, there's still much space for entry-level AWS DevOps Engineers as Amazon implements features and expands its service. 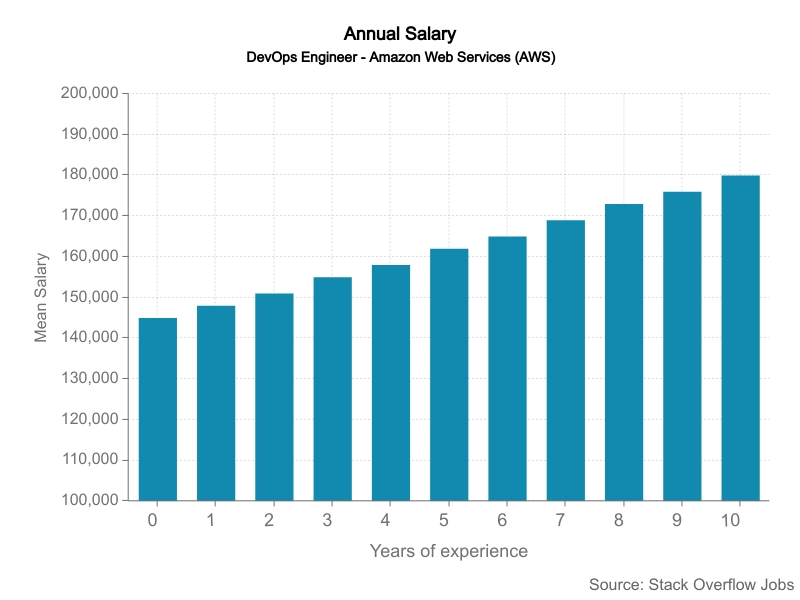 For employers unsure of the salary range for DevOps engineers and developers trying to better understand their career growth prospects, its benefits, and how it can be a game-changer, we have prepared an article that goes in-depth on salaries for a DevOps engineer specialized in GCP.

Watch out for my upcoming blog posts for those looking for the Azure DevOps engineer salary guide.

As Amazon fights for its slice of the market with AWS, entry-level and senior DevOps professionals alike need to understand where to invest their time and resources, learning, researching, and acquiring certifications from the three big names.

On the other hand, new professionals coming from IT areas such as artificial intelligence, database administration, analysis, security, deployment, and system administration see new growth opportunities as hourly salaries for AWS DevOps positions have kept climbing since 2017.

Published at DZone with permission of Chase Bolt. See the original article here.