In the previous post on AWS VPC Basics, we learned about VPC basics and we also set up a VPC with public and private subnets.

In this post, we will learn about another powerful component from AWS, the gift of the internet, The Internet Gateway. We will also learn how routing works within VPC, how to set up routes to the internet gateway and our public subnet. This setup is very common for most of the applications on AWS.

An internet gateway is a service that allows for internet traffic to actually enter into a VPC. Otherwise, a VPC is completely segmented off and then the only way to get to it is potentially through a VPN connection rather than through an internet connection.

In later posts, when we will be creating EC2 instances in subnets, then we will see how it is used to allow internet access.

Also, In order for us to allow the developers to connect to the VMs, to a jump server, or a bastian-host, we have to have this internet gateway first. We typically use a NAT instance or NAT Gateway for this purpose.

A Network Address Translation (NAT) enables instances in a private subnet to connect to the Internet, but prevent the Internet from initiating a connection with those instances. To do that, NAT maps all the private IP addresses assigned to the instances in the subnet to one public IPv4 address called the Elastic IP address. 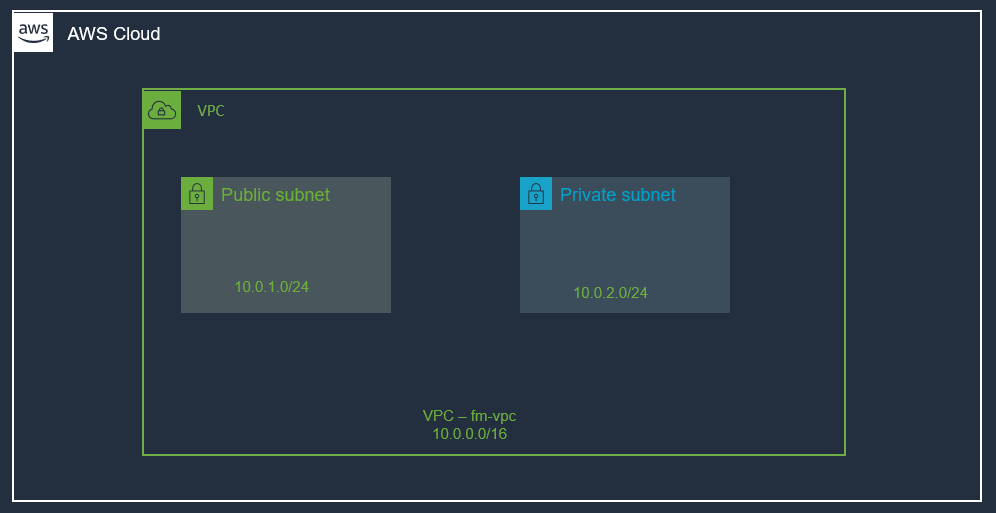 In order to allow internet traffic to our VPC, we can use an Internet Gateway. Let’s create an internet gateway next. 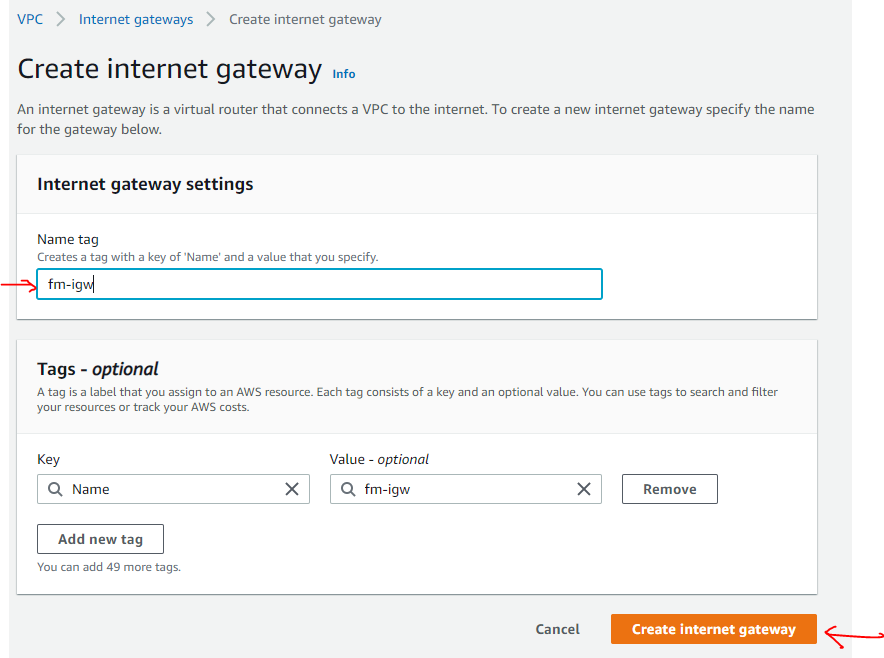 That's all it takes, providing it a name and internet gateway is created.

So, we created an internet gateway, but it's just sitting there by itself. It's not doing anything yet.

Remember, an internet gateway is used to allow internet traffic to VPC, so it needs to be associated with a VPC.

Here is the attached internet gateway:

This will allow traffic to enter the VPC, but we can lock it down. That’s where Security Groups are going to come into play (we will talk about those a little bit later).

Before we continue with anything else, let's take a step back and talk about Route Tables.

A route table specifies how packets are forwarded between subnets within your VPC, the internet, and your VPN connection.

A route table contains a set of rules called routes which determine where traffic has to be directed. You can create as many route tables in a VPC as you want. Route tables act at the subnet level, not the VPC level. A route table can be associated with one or several subnets. By default, all route tables in a VPC have a local route for communication within the VPC. You can add custom routes in a route table by creating a new route defining which traffic (IP destination) must go where (target).

If a subnet is associated with a route table redirecting all traffic to an internet gateway, it is called a public subnet.

If you remember from the previous post, a primary route table was created automatically by AWS when we created our VPC. If you now visit the route tables page in the AWS console, you will find a list of existing route tables. We can also create new route tables, and this is what we will do, we will create a custom route table as shown below:

From the VPC page, select the Route Tables item and Click Create Route Table. We need to provide a name for the route table and select our VPC as shown below: 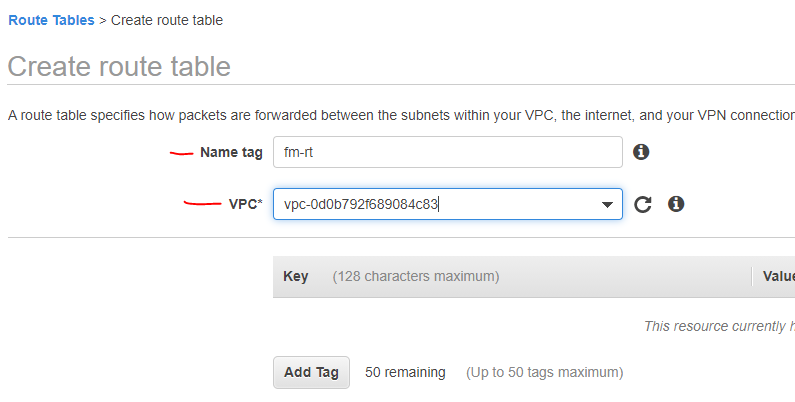 Next, we will add a route for the internet gateway to this custom route table.

Add Route for Internet Gateway to A Custom Route Table

Select the route table, and edit the routes as shown below:

Our custom route table now has a route with Internet Gateway. Next, we will associate it with the public subnet. 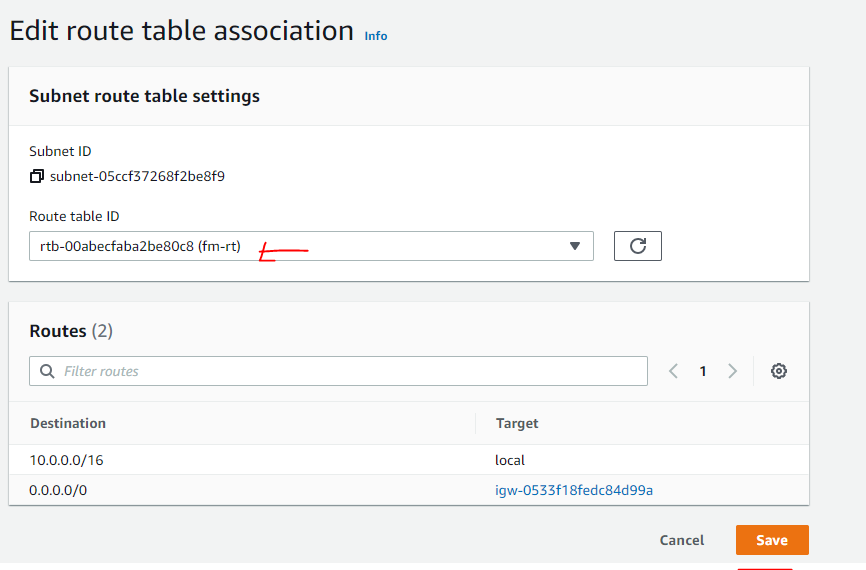 The following screenshot shows the association of the route table with the public subnet. 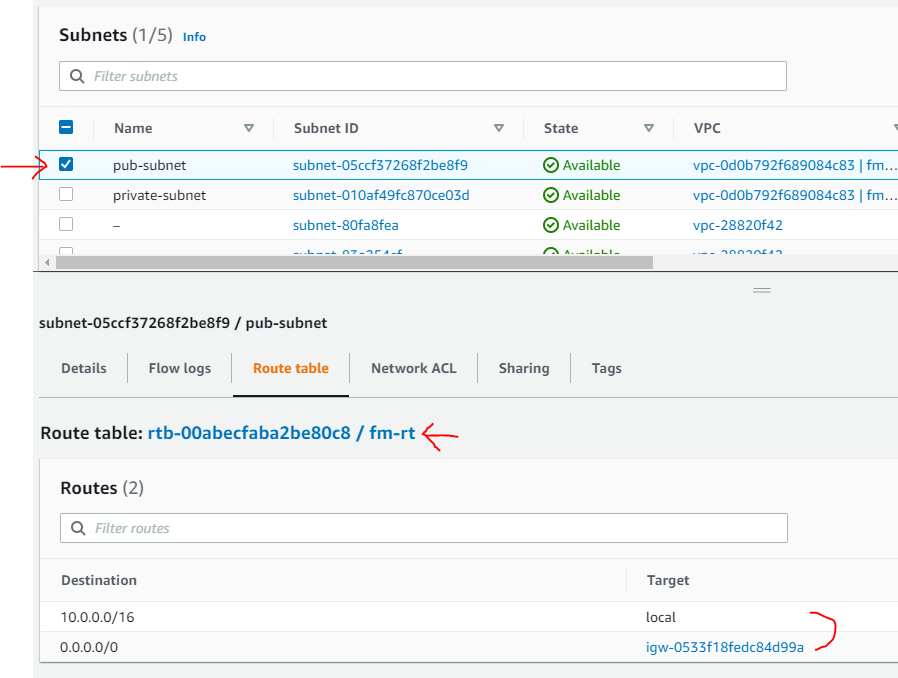 Our Private subnet is still associated with the main route table (no internet) and that is what we want for our private subnet. So, we do not need to do anything.

A private subnet is a subnet with no direct route to an Internet Gateway (IGW). In other words, it has no public IP addresses, no publicly accessible resources, no direct internet access to/or from that subnet. 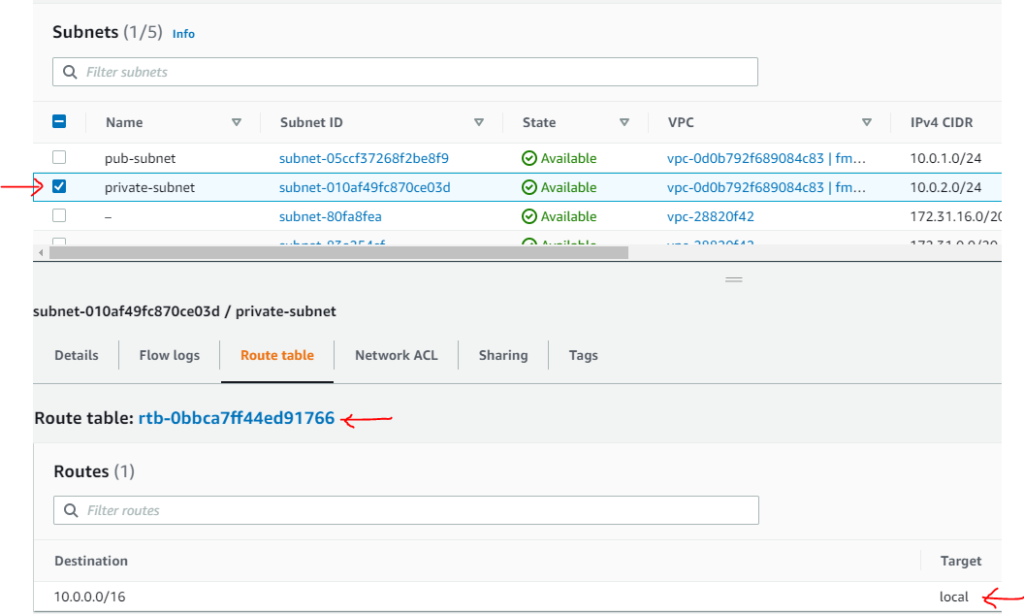 Let’s see how our infrastructure looks like now. The following picture shows these components:

In this post, we continued our journey from where we left it in the previous post on AWS VPC Basics. We have extended our infrastructure a little bit by adding an internet gateway and then set up the routing by creating a custom routing table associated with the public subnet. In the next post, we will resume our journey from this point. Let me know if you have any questions or comments. Till next time, Happy Coding!