Security Groups are one of the fundamental concepts you need to learn when you are setting up infrastructure in AWS. Having a good understanding of their workings will help you not only design proper access for your EC2 instances but you will be also able to quickly spot and deal with issues with existing designs.

We have been using security groups in the earlier posts in this series and today we will learn a little bit more about those.

In my previous post on AWS Basics: Bastian Hosts and NATS, we used security groups to manage access to EC2 instances.

Here is the architecture diagram for reference. As you can see that it already has a few security groups set up which control access to different instances.

A Security Group is a virtual firewall for your EC2 instance to control Inbound/Outbound traffic to/from your instance.

A Security group is made up of a set of inbound and outbound rules.

A security group that belongs to a VPC and is assigned at the instance level and can be shared among many instances. You can use the same Security Group in different subnets in the same VPC. Subnets can also have different Security Groups. 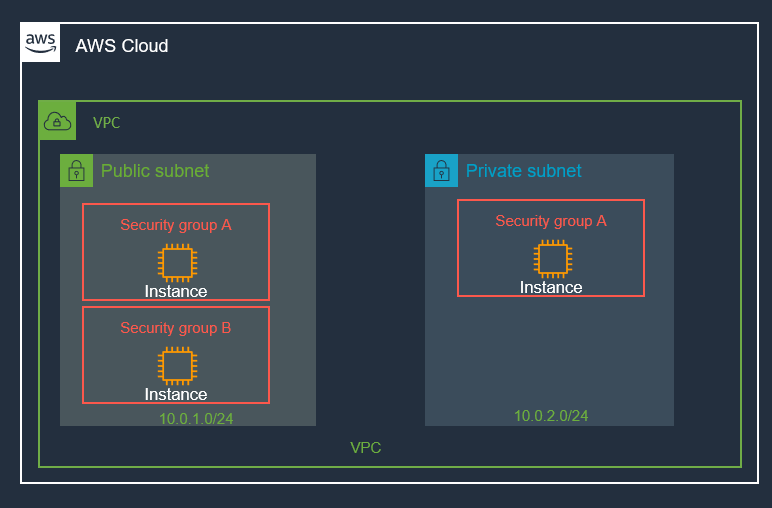 Let’s look at traffic flow to individual instances to understand how security groups fit in:

If traffic is allowed by the Inbound rule, then and only then, it will go to the instance.

We can create security groups from the VPC dashboard: 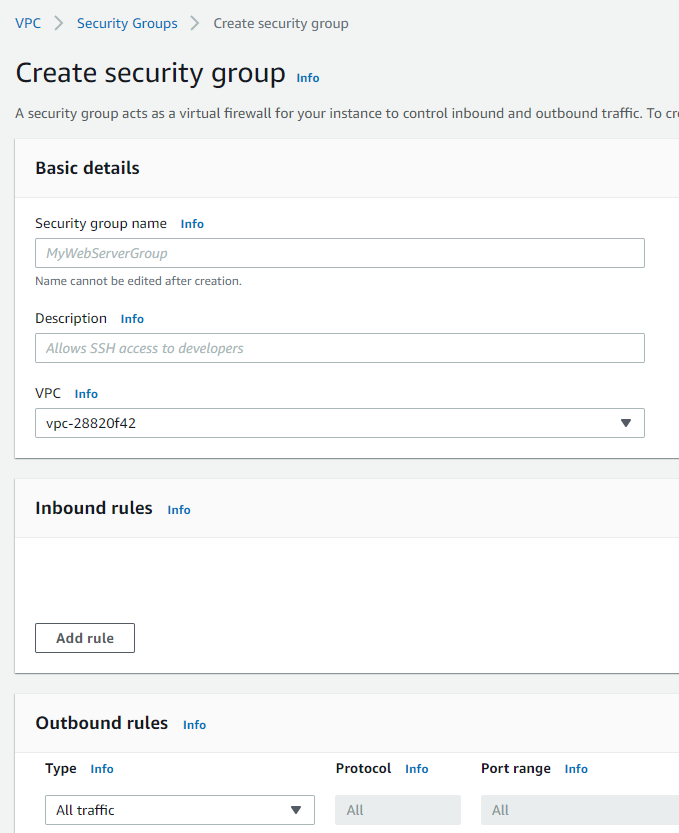 We learned earlier that a security group is a set of inbound/outbound rules.

When creating the rule, you can also specify the Type (e.g TCP), Port, along with source or destination. Following picture shows Inbound Rules example:

You can see that in the example, few Inbound rules are allowing incoming traffic, on certain ports from a certain source(s) (in this example from anywhere in the world).

Here, in this example, we have a single outbound rule, which is allowing 'All traffic' to any destination.

In this example, both types of these Inbound/Outbound rules are defined in the same security group and when attaching to an EC2 instance, they act as a firewall for incoming/outgoing traffic.

Given a rule, you can specify a few different things as source or destination of a rule:

When you set a Security Group as a source/destination; you are saying that any machine that is assigned to that security group can have access over the port or protocol that you defined and allowed through that rule.

Use the description field for documentation. It is good when dealing with IPs or when reviewing your security groups to understand its purpose e.g.:

Security Groups allow (deny) access. They are virtual firewalls for your EC2 instances. They are stateful in design (unlike NACL, which is stateless). Let me know if you have any comments or questions. Till next time, Happy Coding!