Organizations have been attempting to measure software development productivity for decades. Too often, attention has concentrated on easily-quantifiable metrics like person-hours, lines of code committed, function points, or features added per sprint. Sadly, none of these have proven adequate at predicting team productivity. It’s such a complex problem that some have declared it impossible to solve.

Despite these failed attempts, DORA set out to establish measures of development productivity.

DORA (DevOps Research and Assessment) is a research team founded in 2015 by Nicole Forsgren, Jez Humble, and Gene Kim. The group's aim is to find ways to improve software development. Over the course of seven years, they surveyed thousands of software professionals across hundreds of organizations in various industries.

The team's findings were first published in Accelerate: The Science of Lean Software and DevOps (2018). The book introduced four benchmarks that correlate to high-performing organizations: the DORA metrics.

In the same year that the aforementioned book was published, Google acquired the group and established the DORA research program, which is responsible for publishing the yearly State of DevOps Report.

What Are the DORA Metrics?

The groundbreaking insight obtained by DORA’s research was that, given a long-enough term, there is no tradeoff between speed and quality. In other words, reducing quality does not yield a quicker development cycle in the long run.

Both speed and stability are essential. Focusing on adding features at the expense of quality results in substandard code, unstable releases and technical debt, eventually stifling progress.

On the throughput side, DORA adds two more metrics: 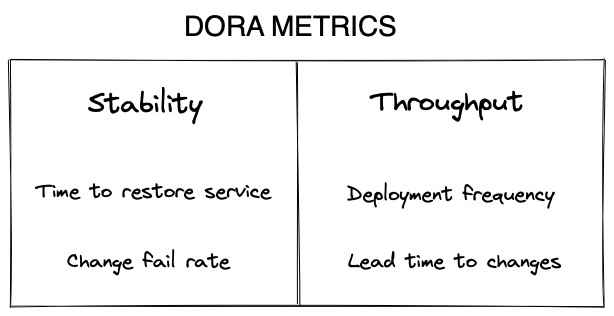 According to the State of DevOps Report 2021 (PDF), the performance across the different levels is dramatic.

Elite teams are thousands of times more productive than the rest.
In 2021, the DORA team introduced a fifth metric: reliability, which measures operational performance by rating how organizations meet or exceed their reliability targets.

Let me preface this section with a few warnings:

Okay, now that that’s out of the way, let’s carry on.

Elite teams have been growing in number in the last few years. In 2018, only 7% of teams or organizations were considered elite. In 2021, that number grew to 26%. So we know growth is achievable. 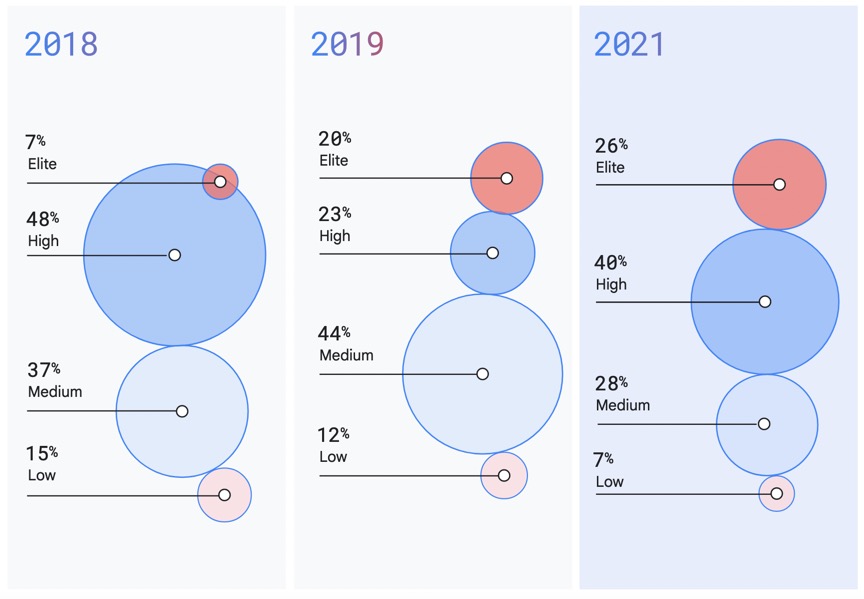 DevOps maturation of the software industry measured in DORA metrics. Source: State of DevOps Report 2021.
The question is how to use DORA metrics to step up a team’s or organization’s game. A bad value in a metric is a symptom. It indicates there are organizational, cultural, or skill problems to address. Once these are managed, the underlying metric should naturally improve.

Ask yourself, “what’s preventing me from releasing right now?” The answer will reveal bottlenecks in the organization. For example, you may be wasting too much time in code reviews, waiting for QA to approve changes, or holding a release until other teams finish their features.

You can improve throughput in a number of ways:

Speed without stability ultimately leads to accruing technical debt and spending more time fixing bugs than shipping features. When the stability metrics don’t look good, users have a bad experience and developers spend most of their time extinguishing fires rather than coding.

Here are a few ideas you can follow to improve stability:

Perhaps unsurprisingly, the 2021 State of DevOps report found a high correlation between elite teams and a generative culture within the organization. The term "generative culture" was coined by Ron Westrum to describe a culture that's inclusive, highly cooperative, and that provides the psychological safety needed to take risks without fear of fallout.

It would be a mistake to think that improving DORA metrics automatically makes for better teams. It's the other way around: an inclusive, generative culture naturally yields higher benchmarks. In other words, there is no chance of sustaining an elite team in a low-cooperation, risk-averse environment. Setting metrics as goals is not only near-sighted, but often an indicator that an organization has strayed into pathological or bureaucratic culture.

Would you like to know what your DORA score is? Take the DevOps Quick Check and find out!