The deep learning and knowledge graph technologies have been developing rapidly in recent years. Compared with the "black box" of deep learning, knowledge graphs are highly interpretable, thus are widely adopted in such scenarios as search recommendations, intelligent customer support, and financial risk management.

Meituan has been digging deep in the connections buried in the huge amount of business data over the past few years and has gradually developed the knowledge graphs in nearly ten areas, including cuisine graphs, tourism graphs, and commodity graphs. The ultimate goal is to enhance the smart local life.

Compared with the traditional RDBMS, graph databases can store and query knowledge graphs more efficiently. It gains obvious performance advantage in multi-hop queries to select graph databases as the storage engine. Currently, there are dozens of graph database solutions out there on the market.

It is imperative for the Meituan team to select a graph database solution that can meet the business requirements and to use the solution as the basis of Meituan's graph storage and graph learning platform. The team has outlined the basic requirements as below per our business status quo:

By having control over the source code, the Meituan team can ensure data security and service availability.

The knowledge graph data size in Meituan can reach hundreds of billions of vertices and edges in total and the throughput can reach tens of thousands of QPS. With that being said, the single-node deployment cannot meet Meituan's storage requirements.

To ensure the best search experience for Meituan users, the team has strictly restricted the timeout value within all chains of paths. Therefore, it is unacceptable to respond to a query at the second level.

The knowledge graph data is usually stored in data warehouses like Hive. The graph database should be equipped with the capability to quickly import data from such warehouses to the graph storage to ensure service effectiveness.

The Meituan team has tried the top 30 graph databases on DB-Engines and found that most well-known graph databases only support single-node deployment with their open-source edition, for example, Neo4j, ArangoDB, Virtuoso, TigerGraph, RedisGraph. This means that the storage service cannot scale horizontally and the requirement to store large-scale knowledge graph data cannot be met.

A Summary of The Testing Process

The Dataset Used for the Benchmarking Test

The team uses the LDBC dataset for the benchmarking test. 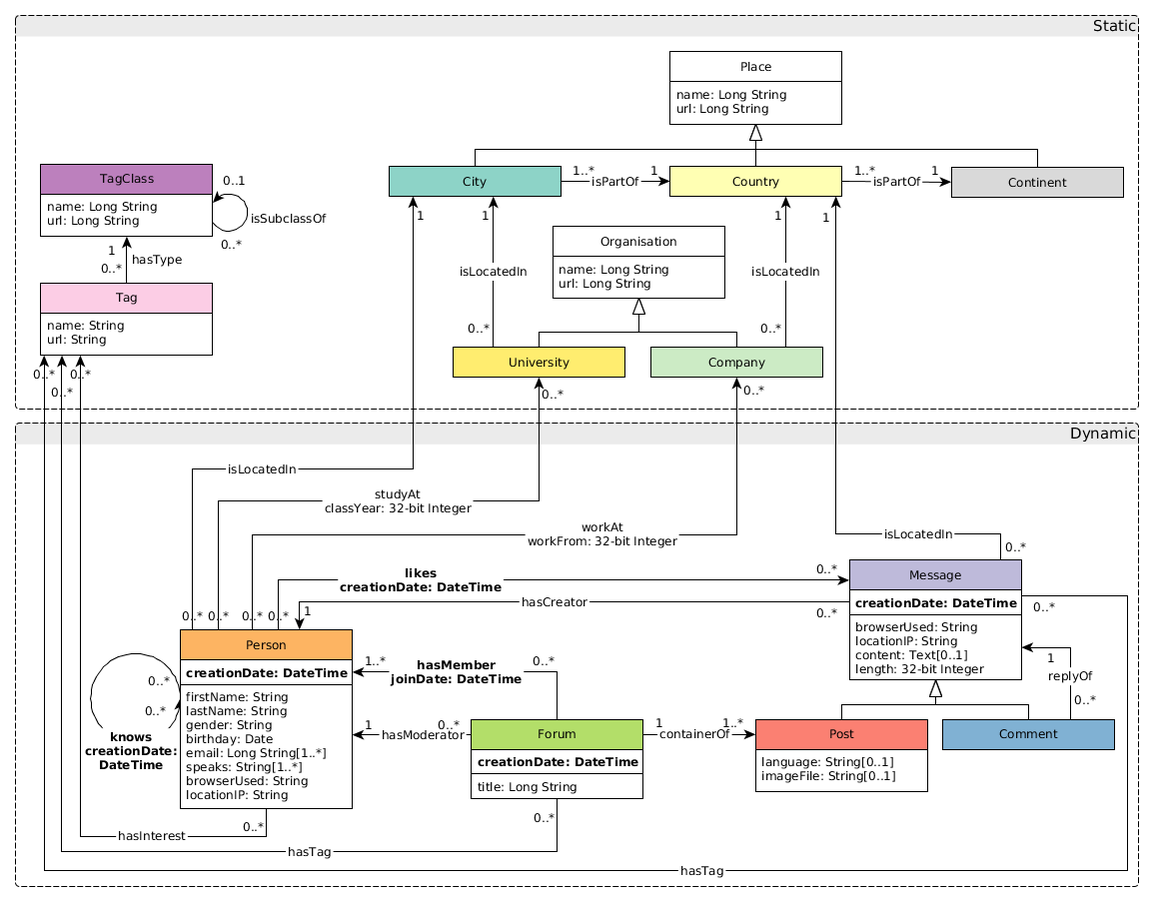 Below is a brief introduction to the data within the dataset:

The benchmarking test has been conducted from three perspectives, i.e. data import in batch, real-time data write, and data query.

The steps of data import in the batch are as follows:

The data import process in each graph database is described below:

Seen from the above results, the team found that Nebula Graph performs the best because it has the lowest time consumption as well as the smallest storage amplification ratio. The data is distributed by primary key hash and the storage is balanced among the nodes.

In Dgraph, the original data size is 194 GB and the server memory is 392 GB; the bulk load operation was suspended after 8.7 hours due to OOM, which resulted in partial success. The data is distributed by the predicates in the RDF model and one type of relationship can only be stored on the same node, which resulted in a severe unbalance of storage and computation among nodes.

In HugeGraph, the original data size is 194GB. When the data import operation was executed, a node of 1000GB was full and the import was partially successful. The storage amplification ratio in HugeGraph is the largest and data distribution is severely unbalanced among nodes.

This test was to insert vertices and edges to graph databases in real-time and to test the write performance of each database. Below is a brief description of how the metrics are defined.

How to Insert Nodes to Graph Databases

How to Insert Edges to Graph Databases

Seen from the above results, the response time and throughput of Nebula Graph are leading the pack in the test because the write requests can be distributed to multiple storage nodes thanks to its architecture.

In Dgraph, the response time and throughput are not good compared with Nebula Graph because one type of relationship can be stored on the same node per its structure.

HugeGraph performs the worst in terms of response time and throughput because the storage backend is HBase which has lower concurrent read and write capability than RocksDB (adopted by Nebula Graph) and BadgerDB (adopted by Dgraph).

The data query benchmarking was to test the read performance of the graph database candidates and it was based on the following common queries: n-hop queries with ID returned, n-hop queries with properties returned, and shared friends query. Below is a brief description of how the metrics are defined.

The average size of the properties on a single vertex is 200 Bytes.

This test didn't include the largest throughput.

In the test of response time (latency) of one-hop queries with ID returned, both Nebula Graph and Dgraph need to search the outgoing edges once. Due to the storage architecture in Dgraph, edges of the same type are stored in the same node. Therefore, there is no network consumption for one-hop queries in Dgraph. In Nebula Graph, edges are distributed to multiple nodes, which is why Dgraph performed a little bit better than Nebula Graph in this test.

In the test of throughput (QPS) of one-hop queries with ID returned, the CPU load of the cluster was restricted by the single node where the edges were stored, which resulted in low CPU occupation ratio in the cluster. Therefore, the largest throughput of Dgraph is only 11% of that of Nebula Graph.

In the test of response time (latency) of two-hop queries with ID returned, due to the same reason stated above, the actual load in Dgraph nearly reached the upper limit of the cluster when QPS was set to 100.  Therefore, the latency in Dgraph was lengthened significantly to 3.9x of that of Nebula Graph.

The test of shared friends queries was nearly the same as the test of two one-hop queries with ID returned. Therefore, the results of the two tests were quite similar.

HugeGraph's storage backend is HBase, which has lower concurrent read and write capability than RocksDB (adopted by Nebula Graph) and BadgerDB (adopted by Dgraph). Therefore, HugeGraph performed worse than the other two in terms of response time and throughput.

The Meituan team has finally selected Nebula Graph as our graph storage engine because it has outperformed the other two candidates in terms of batch data import speed, real-time write performance, and n-hop query performance.

Published at DZone with permission of zhao dengchang. See the original article here.