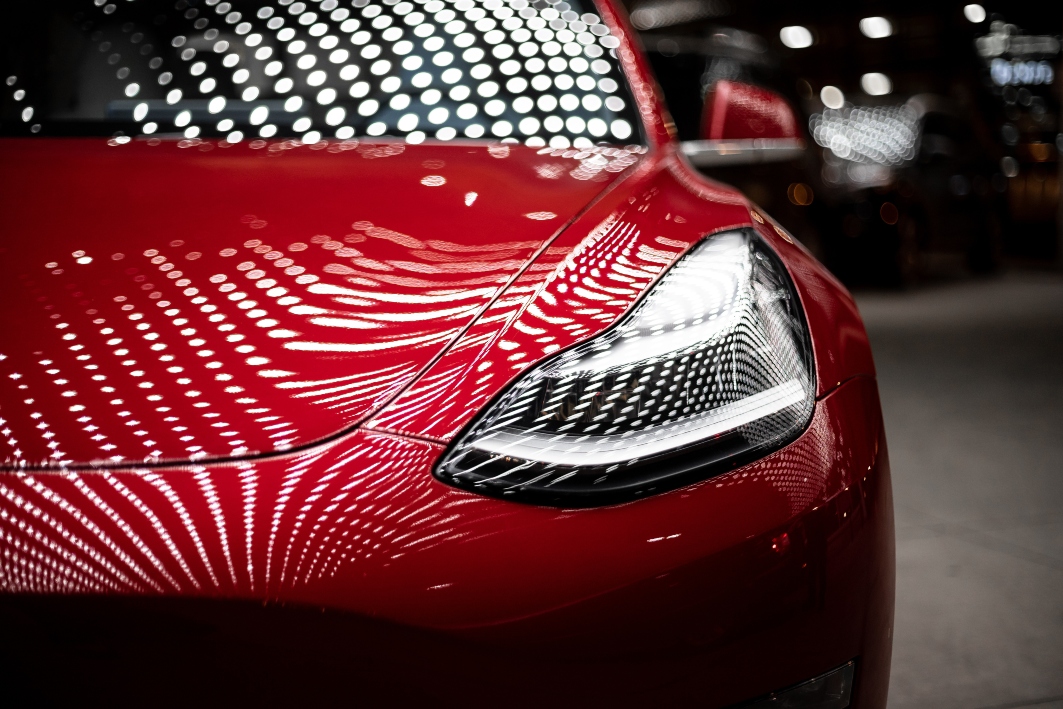 This tutorial focuses entirely on the new driving experience. It is now clear that electric driving is the future. But how far can you actually ride on a full battery? And what influence does the speed, outside temperature, and size of the rims have on the range, for example? In this tutorial, we get started with Vue.js, an easy-to-understand JavaScript framework. We are going to make a dashboard with which we can calculate how much range the Tesla has under different circumstances. 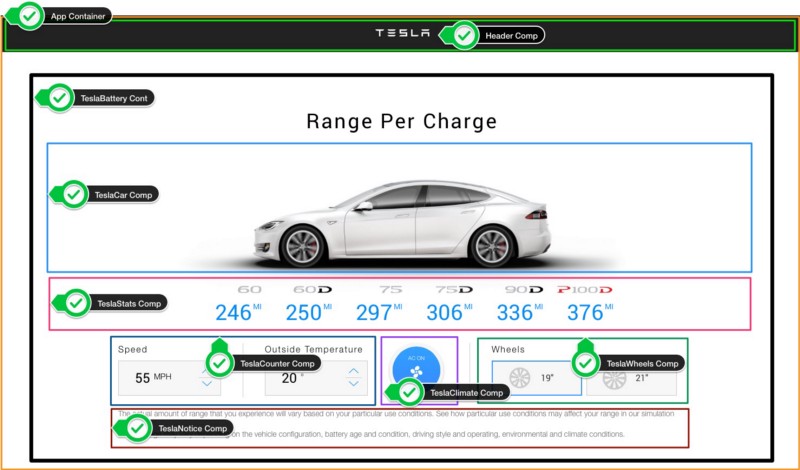 As a starting point for the tutorial, clone this Github repository.

You may also like: Hello Vue: A Quick Tutorial on Getting Started With Vue.

Then, move to the vuejs-app directory.

Read the README.md for the tasks to be executed. The figure above is an example of the application that we are going to build. We initially start from a buggy application, which we must fix and further develop. Before we get started, I first explain how this application is structured.

To start with this tutorial you must install the following: 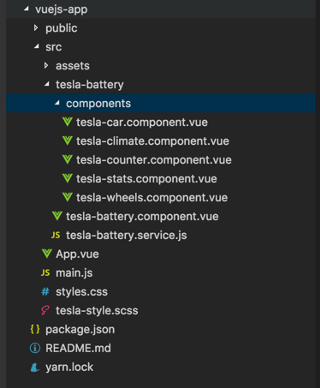 An application in Vue2 is started in  main.js. In main.js, you first create a new "root Vue instance." This goes as follows:

5. Finally, this root Vue instance is mounted. This is the point where the application is started. This refers to an HTML element with the identification #app, which is defined in the template in the  App.vue component. (See the code snippet in the section below.) 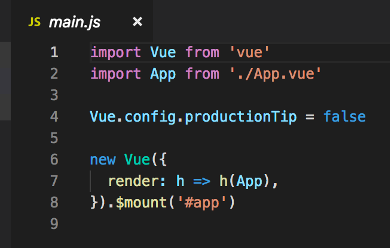 The way we bootstrap a new Vue3 app has changed. Rather than using new Vue(), we now need to import the new createApp() method.

We then call this method, passing the App.vue component (entry component).

Next, we'll call the mount method on createApp and pass a CSS selector indicating our mount element, just like we did with the $mount instance method in Vue 2. 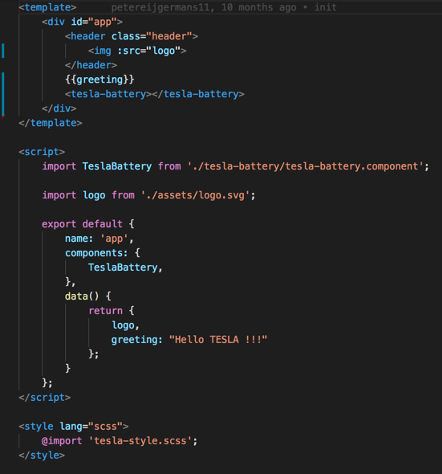 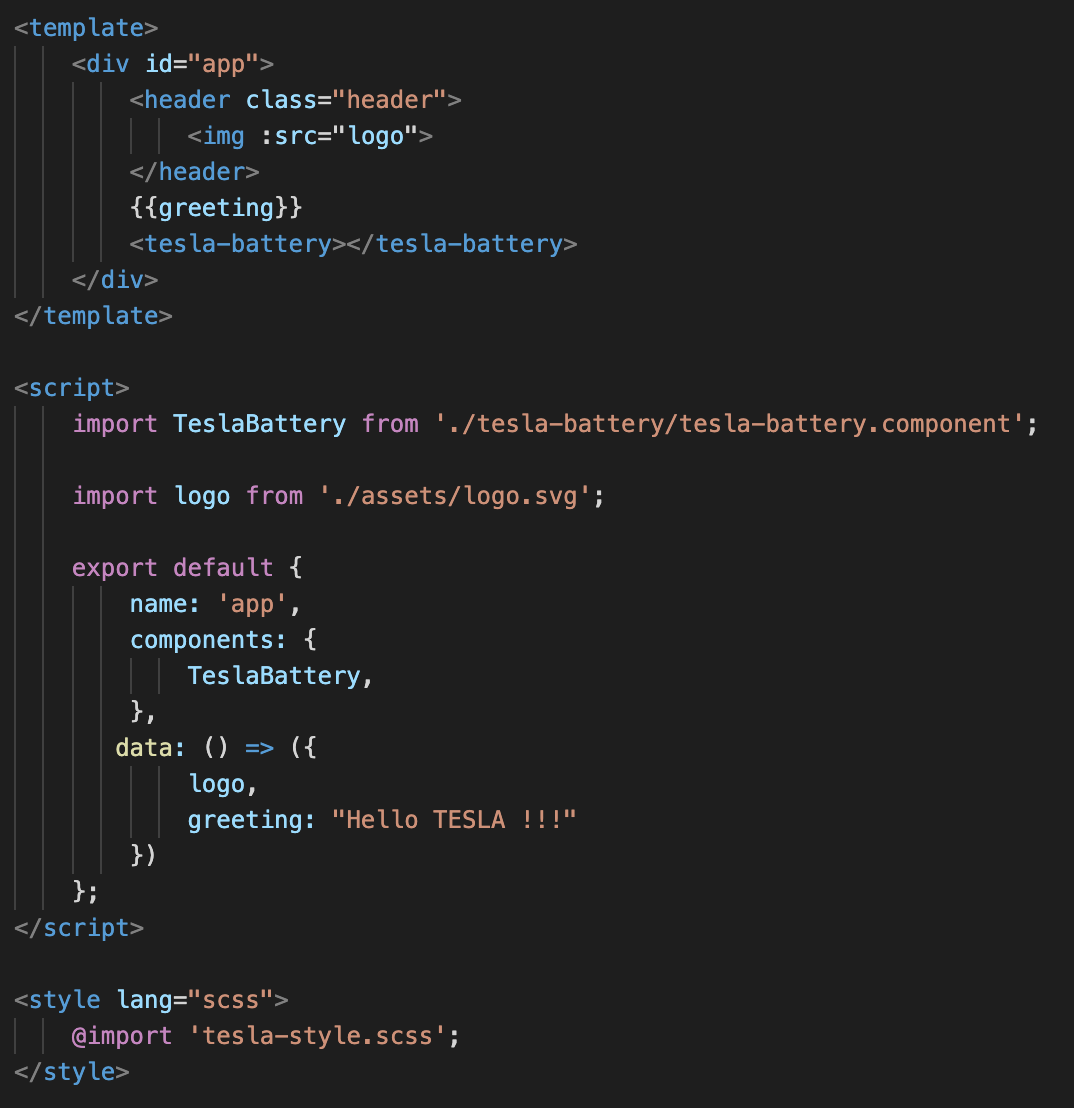 
This App.vue is the entry component of the application and consists of the following parts.

In the data()-function, you can define and initialize state variables, such as the imported logo and the greeting property. To render the logo and the greeting, they must be defined in the template. You must eventually export this entire component (via  export default { }  ), so that it can be imported again into other components and into main.js.

Template: is responsible for defining the output that the component generates. Vue.js uses an HTML-based template syntax. Data from the data ()-function can be easily rendered through data binding. The simplest form of data binding is text interpolation using the Mustache syntax (double braces): {{greeting}}

In the example above,{{greeting}}  is replaced by the value Hello Tesla !!! from the relevant  data()-function. Above this greeting, the logo is also rendered thanks to the img-tag. To assign the logo to the img src-attribute, use attribute binding. For this, you can use v-bind,   <img :src="logo", or   <img v-bind:src="logo">. Attribute binding is often used in this application.

And finally, the TeslaBattery component is instantiated and rendered using the <tesla battery>-tag. For this tag (also called "custom element"), you must use the Kebab case. How this component functions will be discussed later.

Style: in Vue, we use a SCSS file for styling the entire application.

Breaking Down the UI 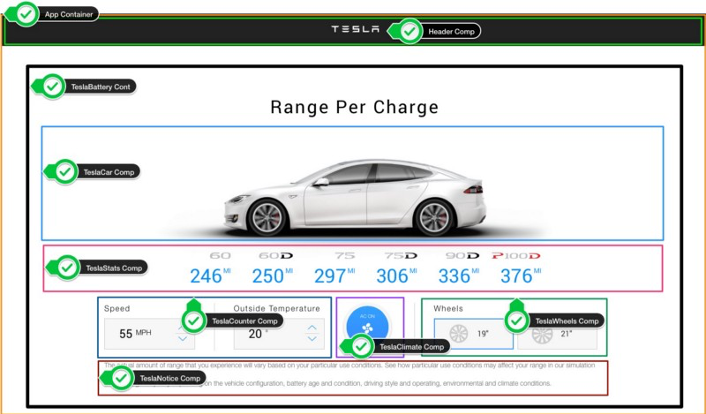 The user interface is represented by a component tree as follows.

The following code block shows that the "Tesla Battery component" is a Container component. The underlying child components are Presentation components. This is a useful pattern that can be used when developing a Vue application. Dividing components into two categories makes them more reusable.

Container components are characterized by the following:

Presentation components are characterized by the following: 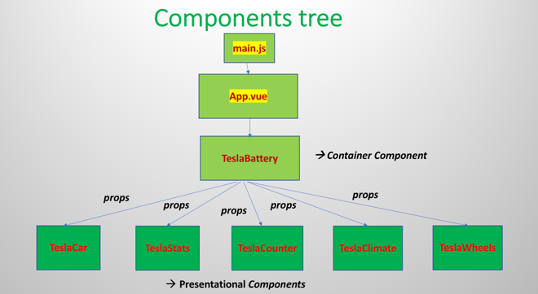 This approach has the following advantages:

The data we use is hard-coded and stored in tesla-battery.service.js. This service has a  getModel-Data() method for retrieving the model data. View the structure of this model data in code block below. 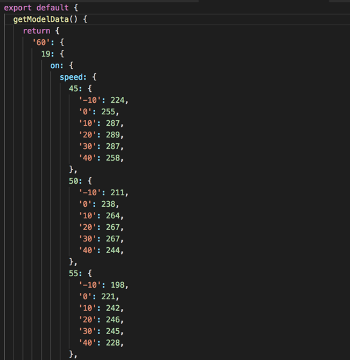 The maximum battery range per Tesla model is determined based on the following parameters:

When fully collapsed, we see that this component consists of the properties below. 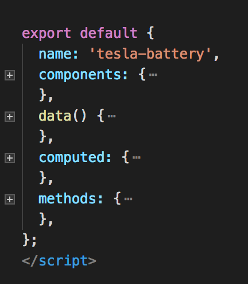 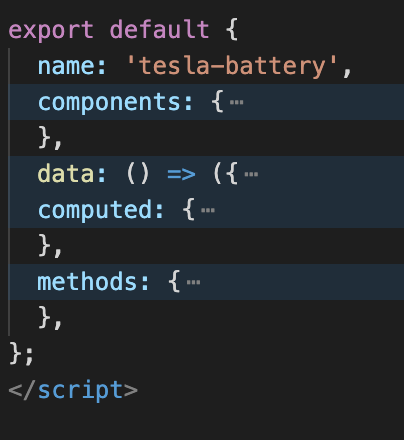 The components property contains all child components that this component uses.

The computed property contains the functions that are cached. That is, such a function is only executed if it depends on a specific data property and when the state of this property changes. In the full version of the TeslaBattery component below, the stats()-function is an example of a computed function.

This function filters the maximum battery range per Tesla model from the model data. The code block below is an example of the output of the stats()-function. This maximum battery range is based on user input, such as the selected wheel size, climate, speed, and temperature. And this stats()-function is only executed if this user input changes. The user input is recorded in the tesla object (state object), which is defined in the data()-function.

The methods property contains all of the functions that are not cached. The changeClimate() function is defined here because this function is triggered by an onClick-event (and is not based on a data/state property). 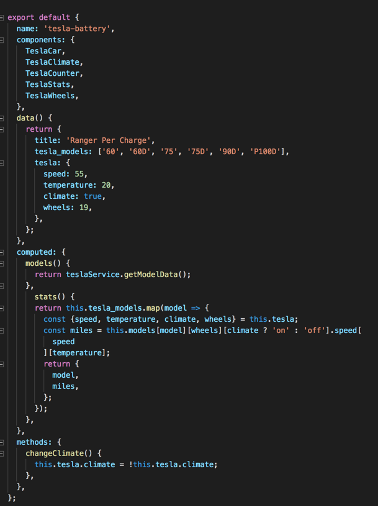 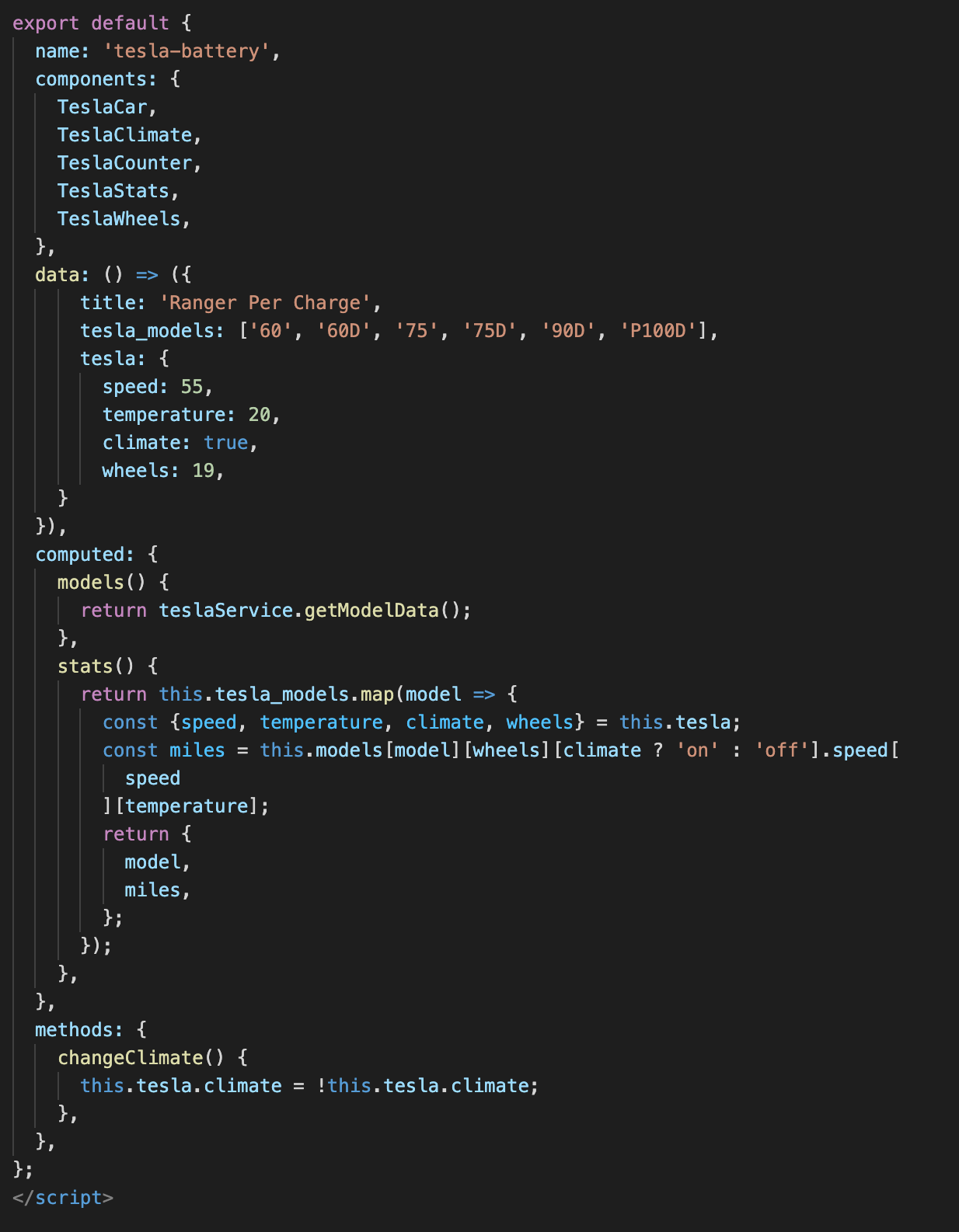 The template of this TeslaBattery component has the same structure as Listing 4:

To pass data to a child component, you must use v-bind or  :  in the template of the TeslaBattery component. 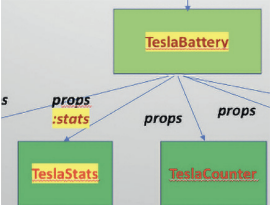 Receive Data in the TeslaStats Component

This component contains a props-property in the scripts section for receiving the stats-data. These stats are of type Array. In the template we use a v-for directive from Vue.js, to iterate through the stats. The :key (in the v-for directive) indicates that this list must be rendered in a specific order.

You can define a custom filter in the filters-property. For example, the filter, "lowercase," with a pipe for rendering the model names in lowercase. There is also a custom filter defined for converting miles to kilometers. 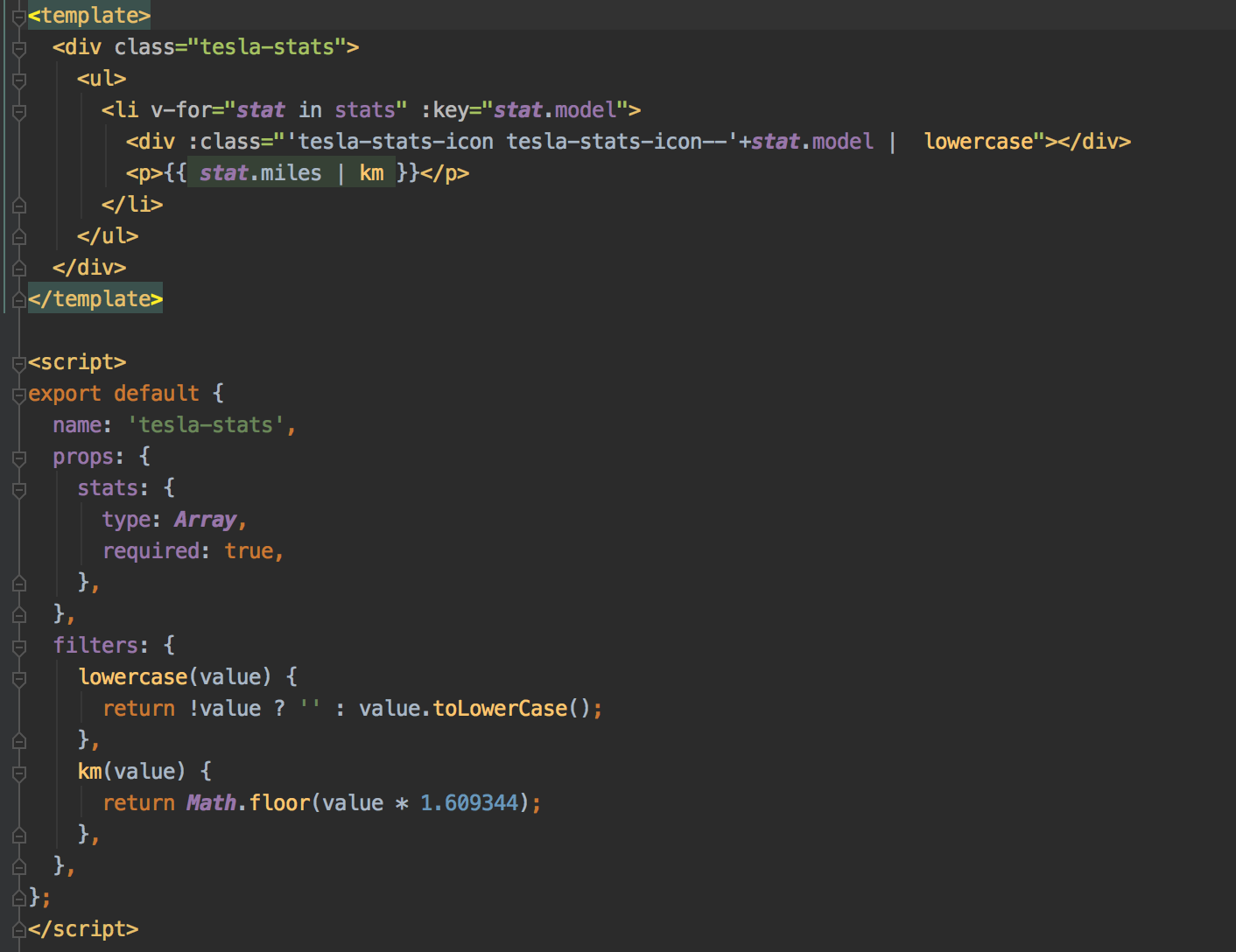 
In Vue 3 we cannot use the filters-property any more. We can use the Compostion API to solve this.
The Compostion API is function-based APIs that allow flexible composition of component logic and reuse logic between components.

How do we use this Compostion API for a filter? 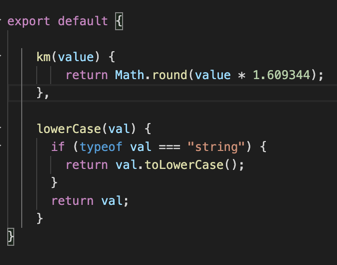 2. Import the composable into a component.

3. And add a setup() method, in which you can import the data and methods exported by the composable. And finally use the filter in your template. 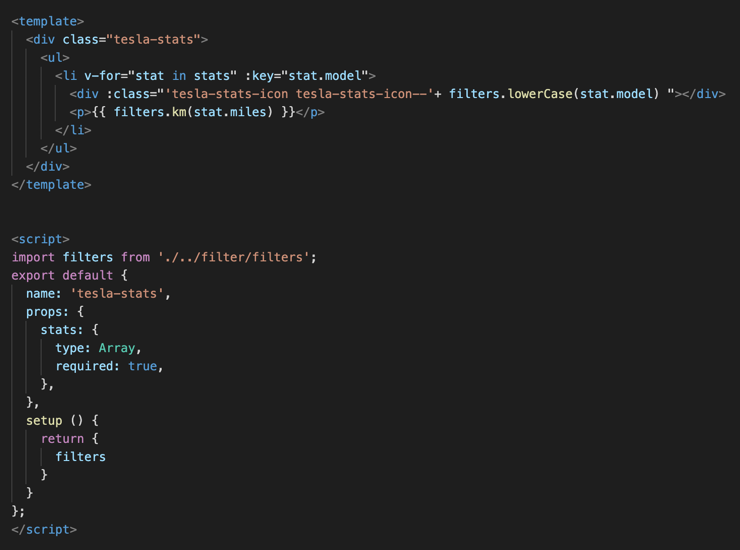 2-way data binding is possible with the v-model directive in your template.
We use this directive in the TeslaCounter component to pass the current speed and return the new selected speed via an emit. 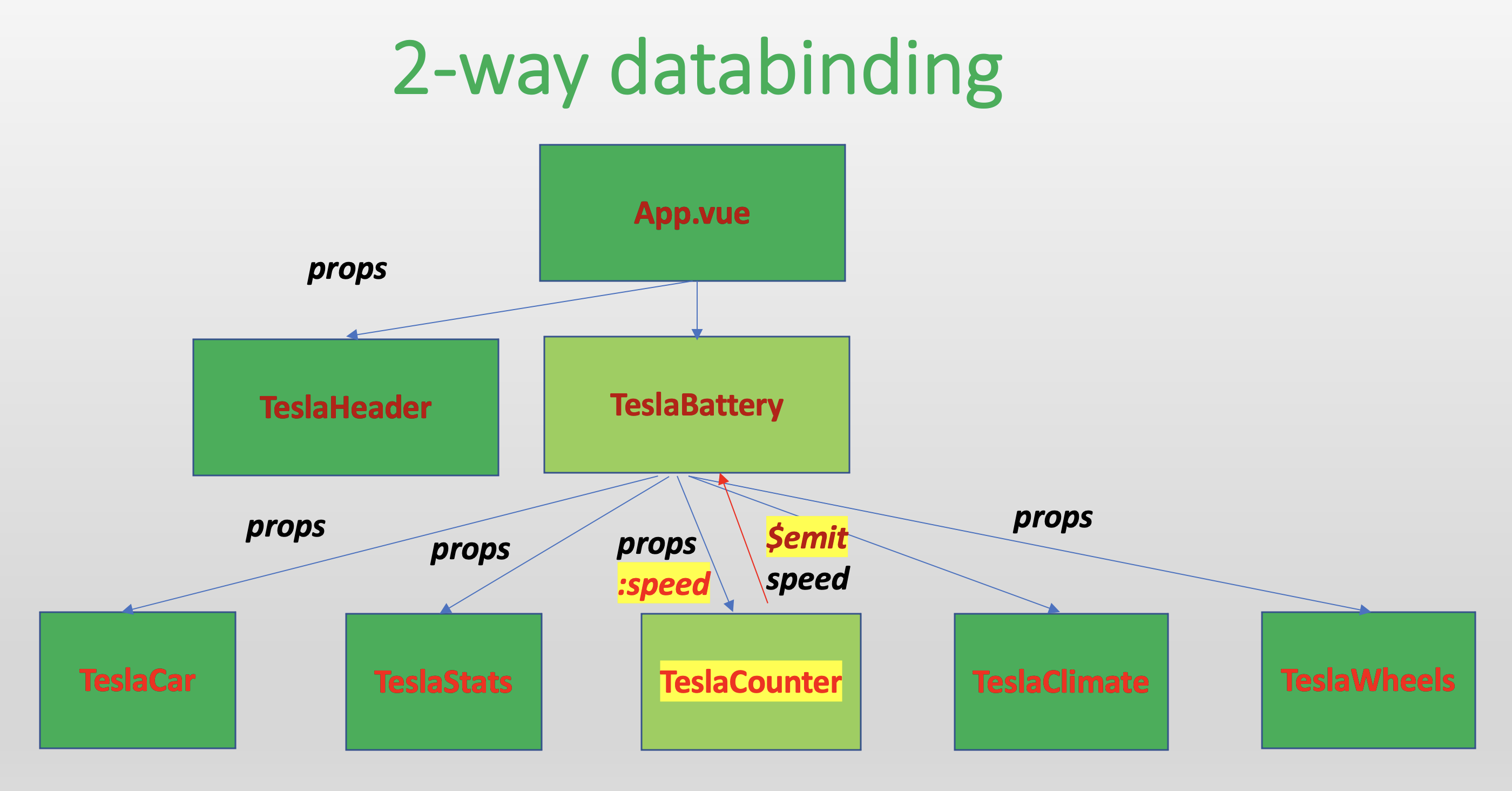 Here we use the v-model directive in the template of the TeslaBattery Component to pass the speed to the TeslaCounter component. 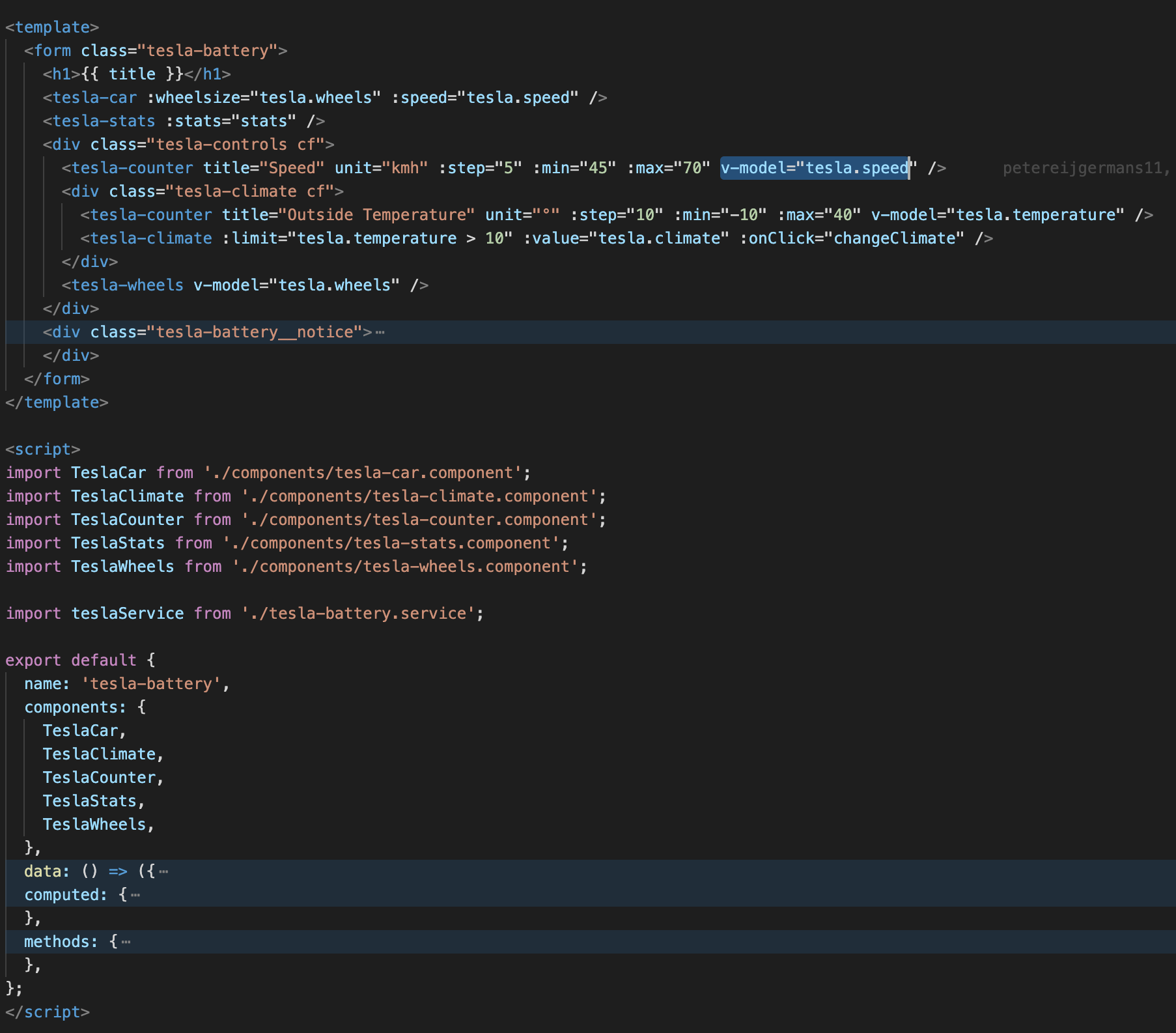 To make this all work, the receiving component (the TeslaCounter component) has to accept a modelValue property in the props.
And second has to emit an @update:modelValue - event for the new value (is the new selected speed).
The emit take place in the increment() method. This method is triggered via the @click="increment" event, defined in the template of the TeslaCounter component. 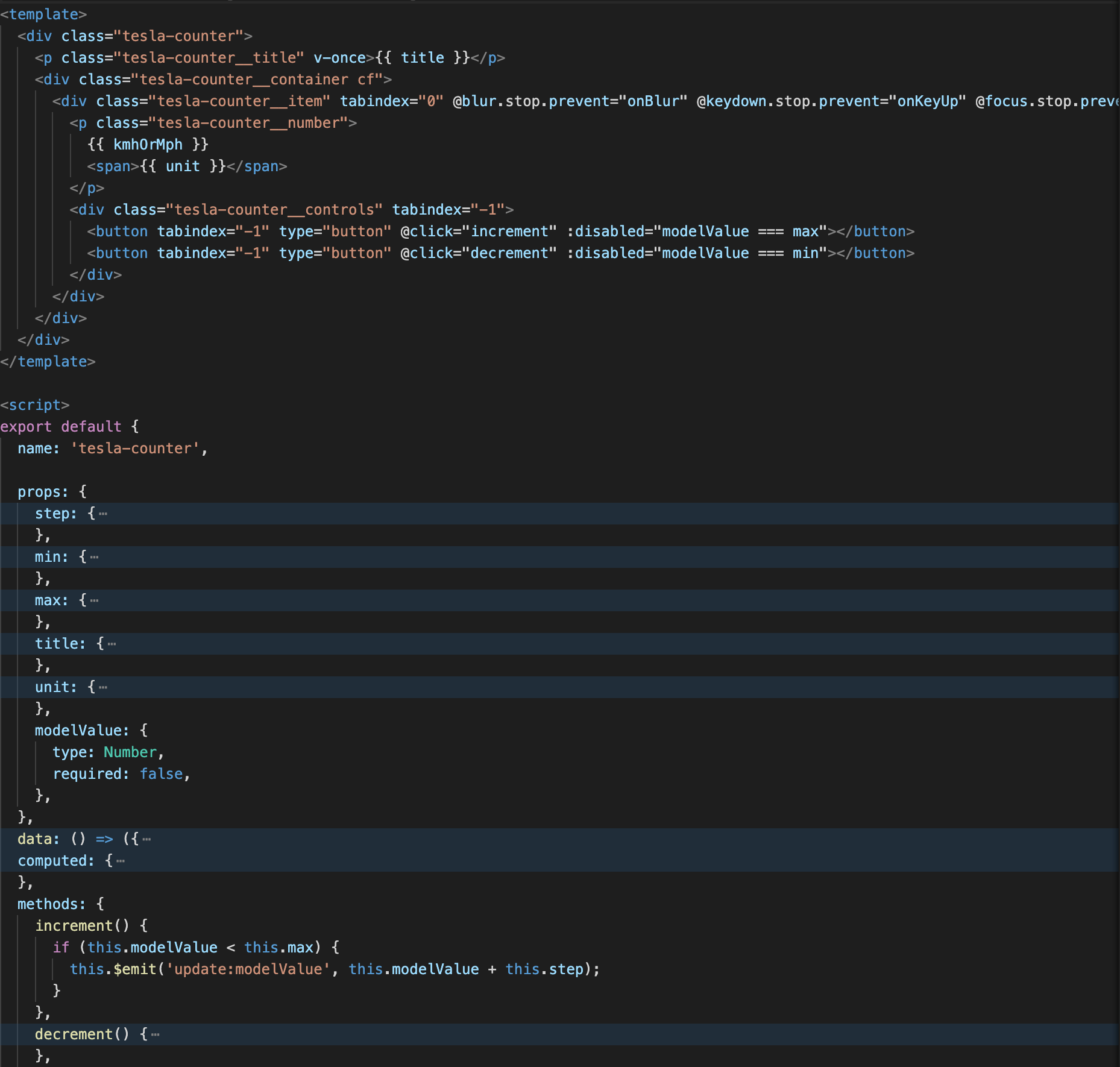 With this introduction, you can start solving bugs and carrying out assignments described in the README.md of this project. In this Github project a powerpoint has also been added, which elaborates on issues such as two-way data binding through the v-model directive, assigning an onClick event to a button with @click and creating other components.