After researching the databases and storage systems on the market, we found a more efficient and accurate real-time data warehouse solution: Pravega + TiDB.

In this article, I'll introduce Pravega, a distributed stream storage system, and TiDB, a distributed SQL database. This combination resolves Kafka's data persistence dilemma and provides auto-scaling capabilities, improving concurrency, usability, and security for real-time data warehouses. I also provide a docker-compose demo for you to try Pravega and TiDB. I hope you find this article helpful.

Open-sourced by Dell EMC, Pravega is a stream storage system and a Cloud Native Computing Foundation (CNCF) sandbox project. It is similar to Kafka and Apache Pulsar and provides a stream and schema registry. 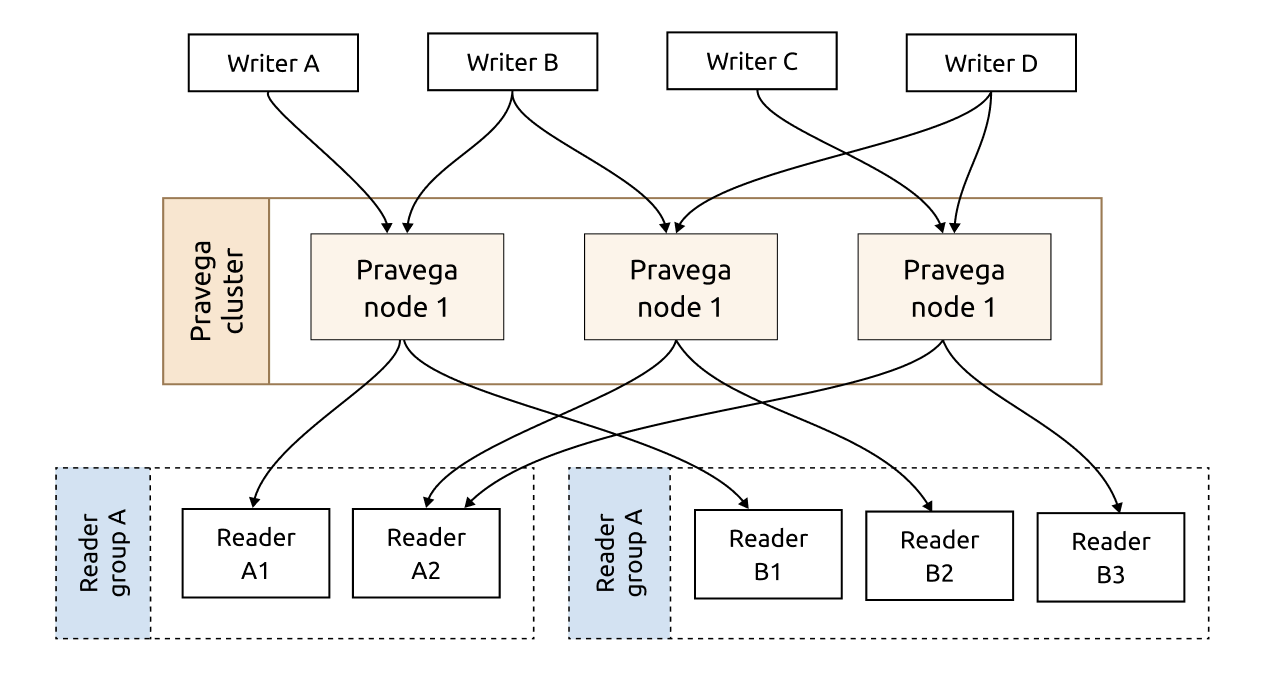 In distributed systems, client applications and messaging systems often use message queues to asynchronously transfer messages. When it comes to message queues, everyone thinks about Kafka. Kafka is a distributed log system based on Zookeeper. It supports multiple partitions, multiple replicas, and multiple consumers.

Pravega, in contrast, is a new stream storage system, built to solve the problems that Kafka cannot. It refactors the architecture of stream storage. As a real-time stream storage solution, Pravega natively supports long-term data retention. Pravega writes data on the Hadoop Distributed File System (HDFS) or S3, thus eliminating the concerns over data persistence. Moreover, Pravega only stores one copy of data across the whole system.

Why Pravega Prevails Over Kafka?

You may wonder, "Why reinvent the wheel when there's already Kafka?" When I used Kafka, I was troubled by three problems: data loss, data retention, and consumer rebalance. Kafka takes in more information than it gives out. After the offset is committed, there are risks for data loss.

Kafka doesn't provide a simple and efficient solution for persisting data to HDFS or S3, so data retention becomes a problem. Although Confluent offers the solution, you have to use two sets of storage interfaces to access data from different layers.

Consumer rebalancing is also harmful. Because new consumers are added to the queue, the queue might stop consuming messages during the rebalance. Because of the long commit interval, consumers might repeatedly process data. Either way, rebalancing might cause a message backlog, which increases latency. 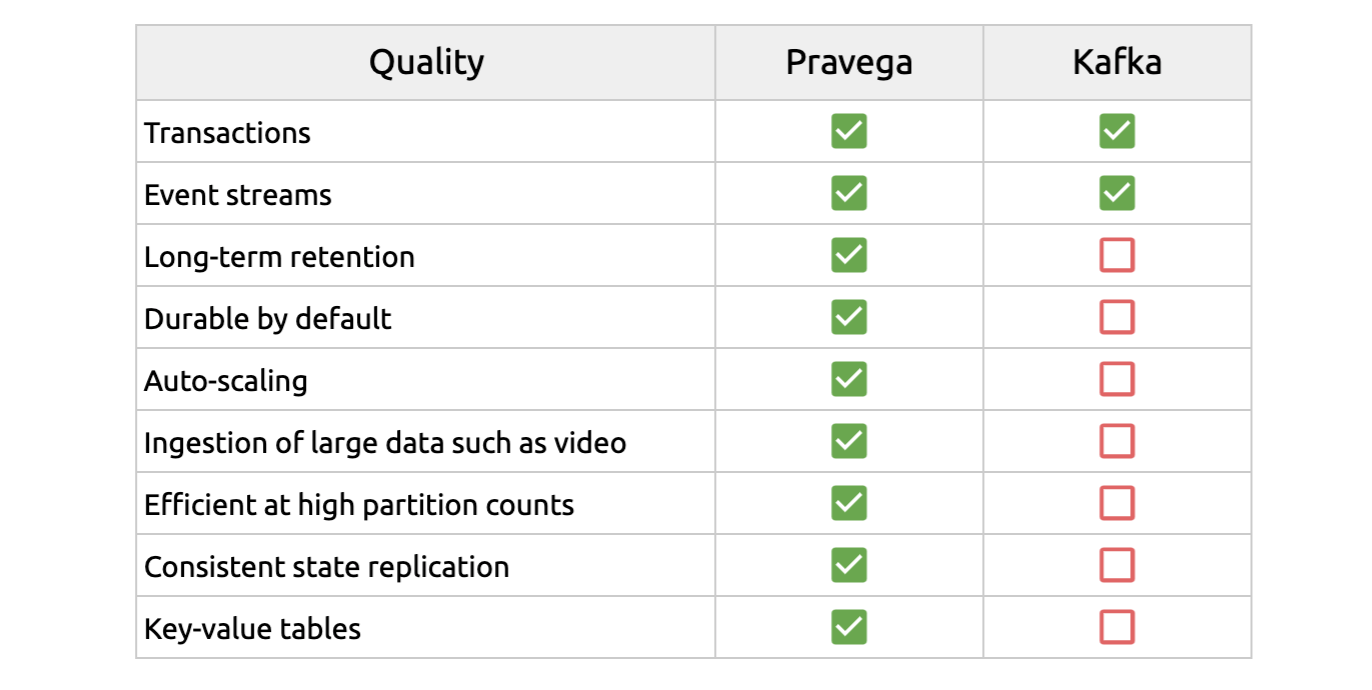 Pravega uses Apache BookKeeper to write concurrent, real-time data with low latency. However, BookKeeper only serves as a cache layer for batch writing. All read requests to Pravega are made directly to HDFS or S3 to take advantage of their high throughput capabilities.

There are various choices for the data storage layer, but not all of them are suitable for a real-time data warehouse:

TiDB, however, addresses all these needs.

Compared to other open-source databases, TiDB is more suitable for building real-time data warehouses because of its HTAP architecture. TiDB possesses a hybrid storage layer consisting of TiKV, a row-based storage engine, and TiFlash, a columnar storage engine. The two storage engines use TiDB as a shared SQL layer. TiDB answers online transactional processing (OLTP) and online analytical processing (OLAP) queries, and fetches data from either engine based on the cost of the execution plan. 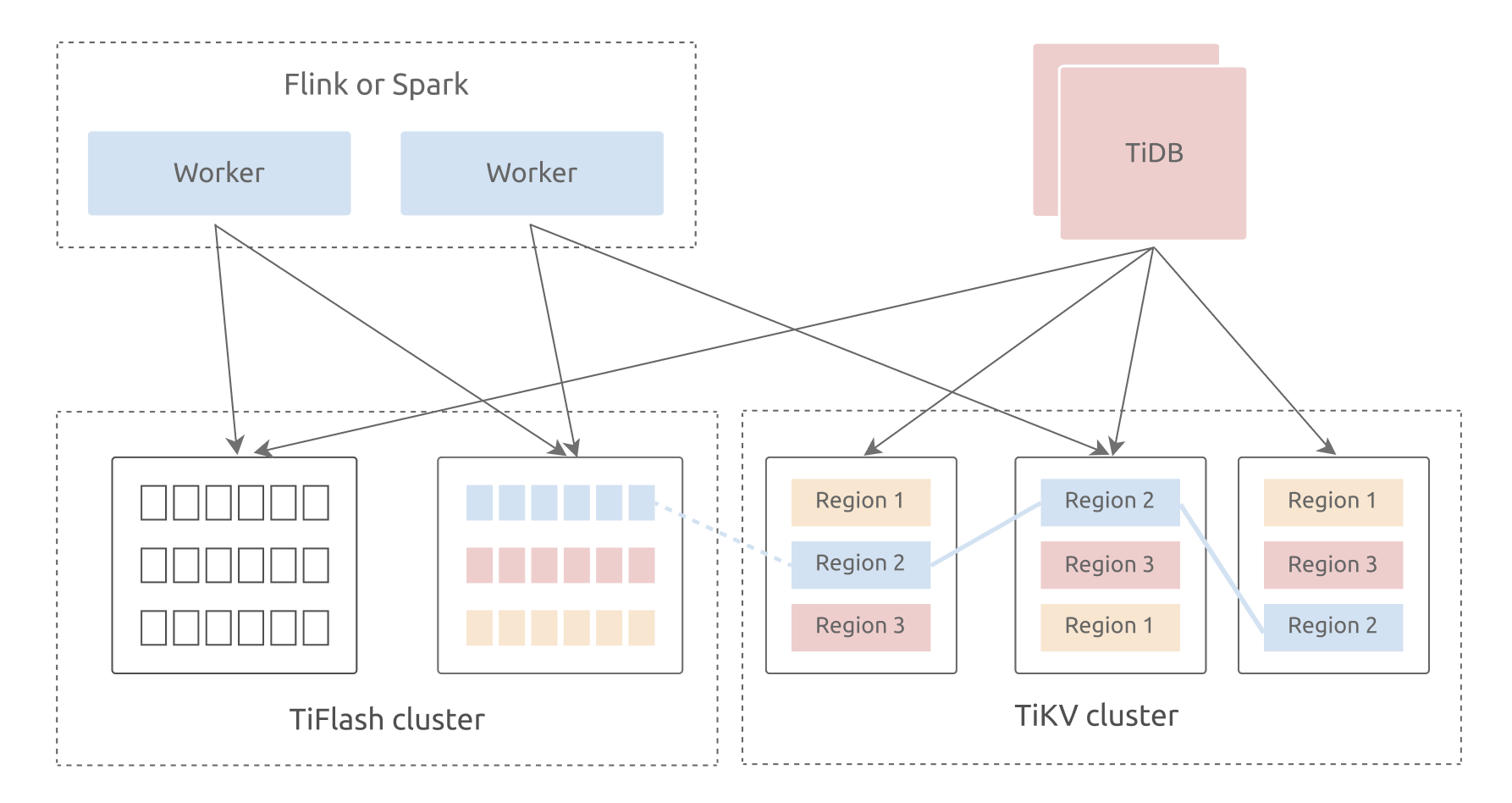 Moreover, TiDB 5.0 introduces the Massively Parallel Processing (MPP) architecture. In MPP mode, TiFlash complements TiDB's computing capabilities. When dealing with OLAP workloads, TiDB becomes a master node. The user sends a request to the TiDB server, and all TiDB servers perform table joins and submit the result to the optimizer for decision making. The optimizer assesses all the possible execution plans (row-based, column-based, indexes, single-server engine, and MPP engine) and chooses the optimal one.

For example, an order processing system may experience a sudden traffic peak during a sales campaign. During that peak, businesses need to perform quick analytics so they can timely react and respond to customer behaviors. Traditional data warehouses can hardly cope with flooding data in a short period of time, and it might take a long time to perform the follow-up data analytical processing.

With the MPP computing engine, TiDB can anticipate the coming traffic peak and dynamically scale out the cluster to provide more resources for the campaign. It can then easily respond to aggregation and analytical requests within seconds.

With the help of Flink, TiDB teams up with Pravega to build a real-time, high-throughput, stable data warehouse. This data warehouse is able to meet various user requirements for big data and handle OLTP and OLAP workloads in one stop.

To better showcase the usage of Pravega and TiDB, we provide a demo based on docker-compose, which demonstrates how data flows from Pravega through Flink to TiDB. You can write and commit Flink jobs via the Flink SQL client and observe the execution at <HOST_IP>:8081.