“OAuth 2.0 is the industry-standard protocol for authorization.”

To start, I would like to draw your attention to the main goal of the OAuth framework: authorization delegation. It's very important to understand it to not be confused with the use cases it covers. The most common confusion about it is thinking of it as an authentication solution, but it is not. Looking ahead, authentication might be implemented on top of OAuth 2.0 with OpenID Connect, which is an additional identity layer.

At the very highest level, roles interact in the following way: 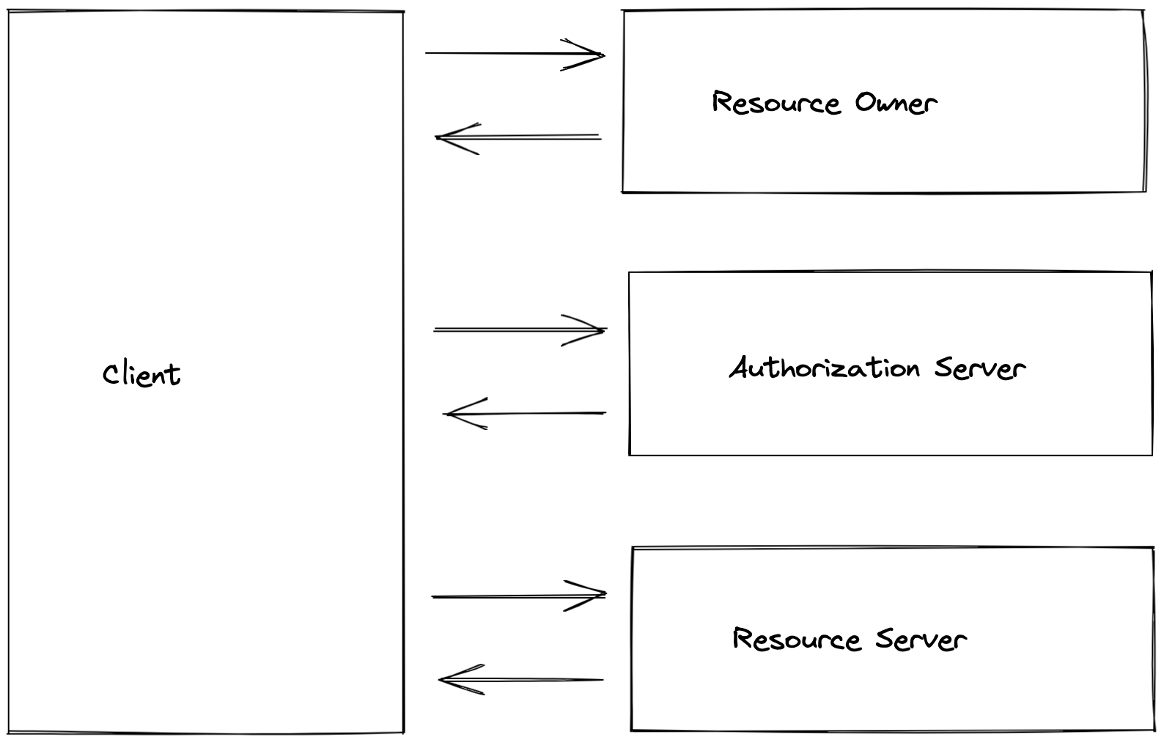 Now we know which roles exist, so let's get into details about what the flow they should pass looks like. Actually, there is more than one flow, but in order to get the idea, we will look at the most common one.

Let us imagine we're building an application that should consume GitHub API on behalf of a user registered in GitHub. Since GitHub provides OAuth 2.0 interface with authorization code flow, it would be a good example. From the user perspective it looks like the following:

The very important thing here is that our application now is authorized to access the user's resources even without their action. For example, open PRs on the user's behalf or leave comments automatically: that's the whole point of OAuth, and it gives a very powerful tool which should be used in a very careful way to avoid unexpected manipulations with users' resources. 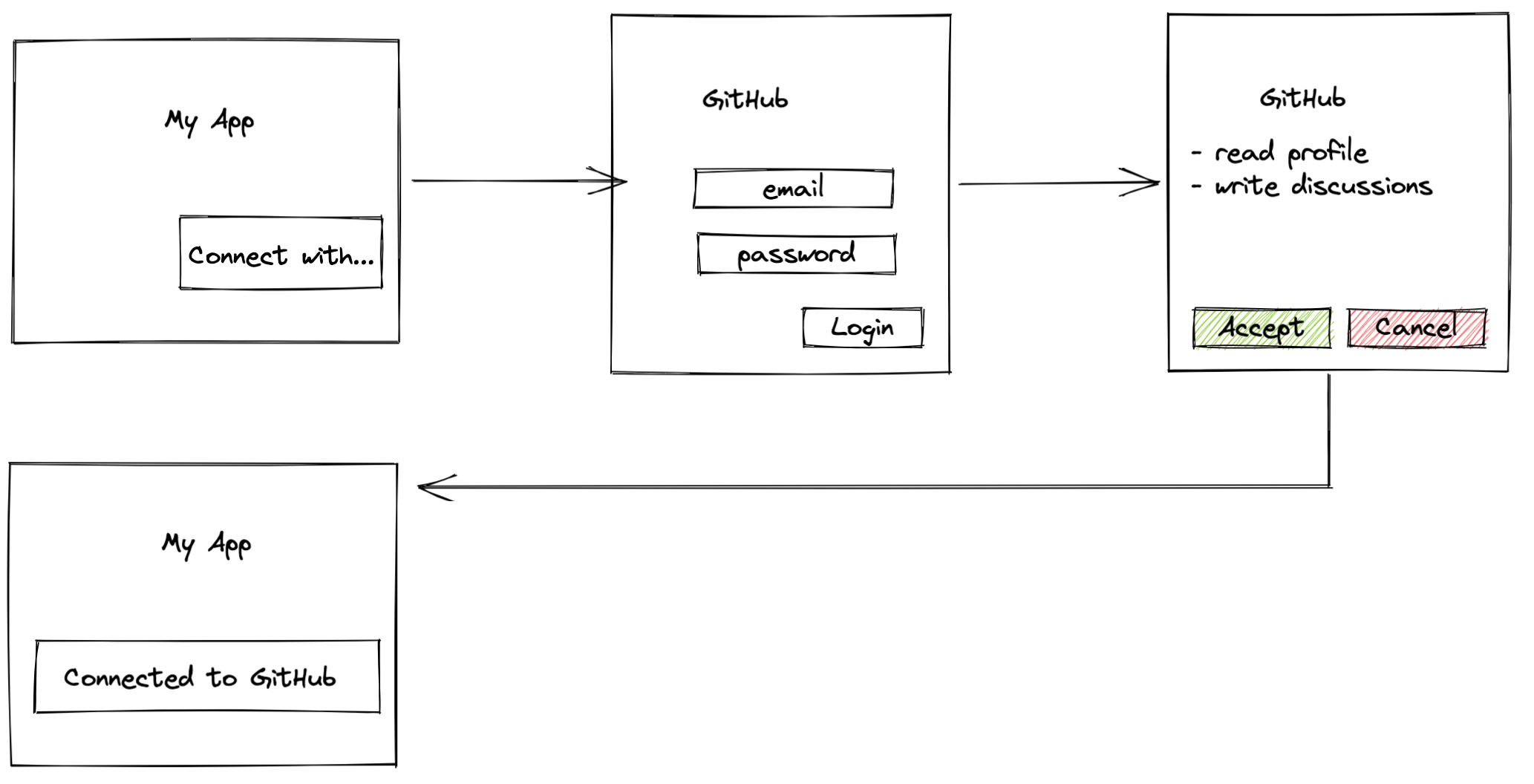 For example, we've build a very cool GitHub UI which simplifies the user experience. The application should have full access to users' resources on GitHub to support all the features. In this case, we would implement OAuth authorization and request full access (all existing scopes) from GitHub authorization server. At the very first look, it seems like OAuth plays the authentication role here, but it does not. It authenticates users to GitHub but not to our application. Instead, it authorizes our application to manage users' resources on GitHub. The user is still not authenticated to our application since it does not have users' identification data and does not verify it.

The Proof Key for Code Exchange (PKCE, pronounced pixie) extension describes a technique for public clients to mitigate the threat of having the authorization code intercepted.

In the previous example, the authorization code exchange for an access token was secured with API keys, which in order to perform, requires the exchange from the backend (for security reasons API keys should not be stored on frontend). The PKCE provides possibility to get rid of API keys and perform the exchange directly from frontend. Simply put, it requires the client to generate a secret first and then use it while authorizing code exchange.

Even if authorization code is intercepted, it's impossible to use it since code exchange requires the secret.

There are two types of access tokens: reference and self-contained. Let's take a look at possible examples of each one and compare them to each other.

Reference tokens are just unique strings which are stored to DB and in fact, are just keys that provide reference to some information the token should contain. Such tokens should be secure enough to avoid the possibility to guess them. In order to get any information referenced by the token, an application should request it either from DB (if it has access) or from a special token introspection endpoint (e.g.: /token_info).

The approach provides some benefits as well as challenges.

First, since reference tokens do not encode any information, they are just lightweight strings that will not affect much HTTP header size.

Secondly, there is a very simple way to manage user sessions, because the token is tied to a record in DB which might contain session information. Each time token is validated, its data must be requested.  So if, for example, the user session is terminated, that would be reflected in the response.

As we identified above, the reference token validation requires sending an additional request to an API to get its information. Thus, it affects the overall execution time and performance. Let's imagine we have to validate the token from each request coming to our backend and average throughput is about 1k rps. Obviously it's very expensive to perform an additional request to validate the token each time.

Self-contained tokens encode a payload with all the necessary information for token validation. The most common example is JWT. It is represented with a 3-part string delimited by dots:

It is important to keep in mind that each part of the token is just a base64, so it could be decoded without any secrets. However, the other part's signature guarantees the body was not changed. JWT token signature validation requires public key.

Self-encoded token validation is autonomous and does not require any additional requests because all of the needed information is passed in token payload, which saves time and improves performance in comparison to reference tokens validation.

Besides the fact that self-encoded token validation does not require additional requests, user session validation still requires it. Obviously there might be some sophisticated approaches applied with optimization, but it brings a lot of additional complexity.

Authentication is a process of checking user identity. It might be implemented in any way and it is not covered by the OAuth 2.0 framework. The most common examples are the following: 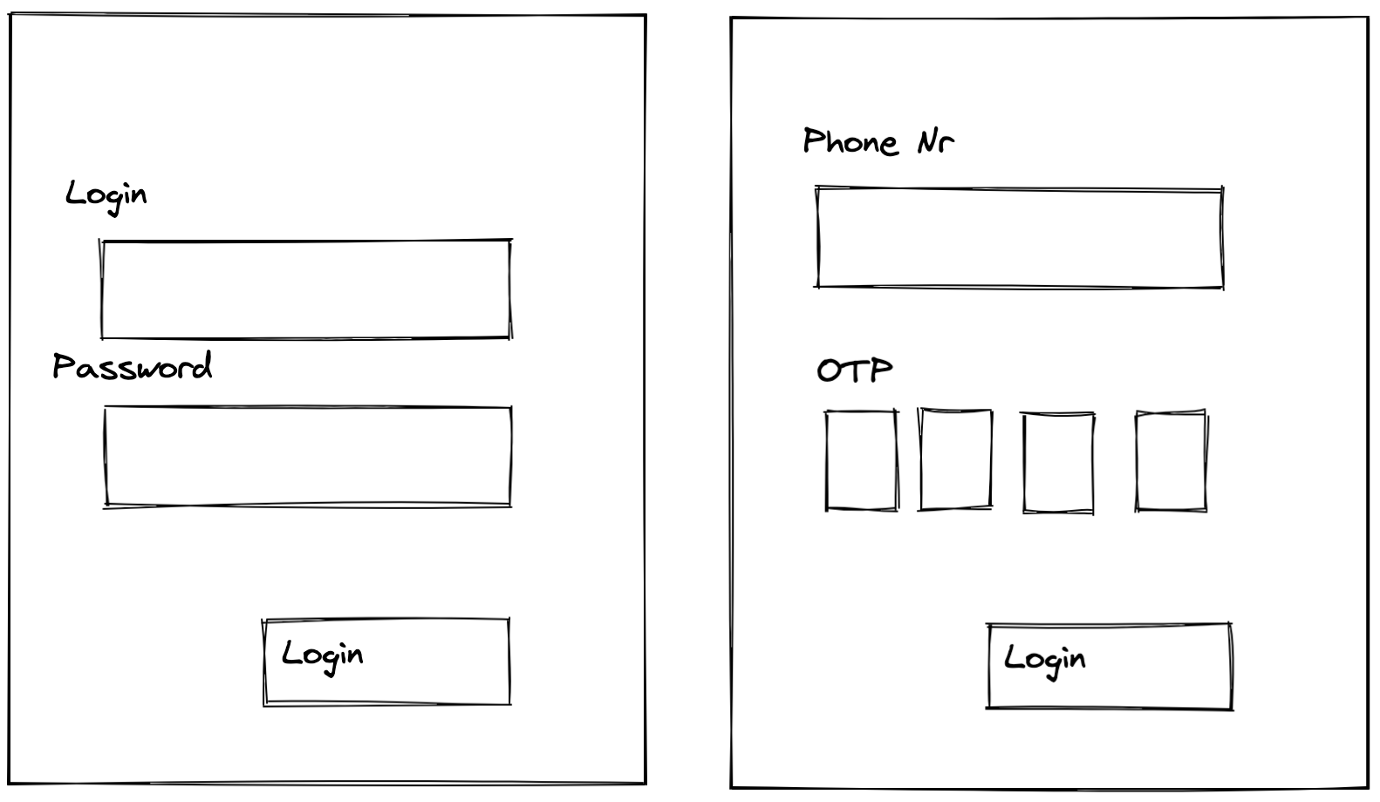 Once users are authenticated, they are asked to give a consent. This is a very important element that requires a lot of attention. The consent must as clearly as possible contain all of the scopes (you can think of them like permissions) that users delegate to an application. On the other hand, representation should be short enough to not overload users with a bunch of information (like usual privacy and policy agreement). Otherwise, users might allow other applications to manipulate their resources just because it's hard to review the consent and easier just to agree.

In the case users disagree, the flow should be interrupted and users should be redirected to back the application. 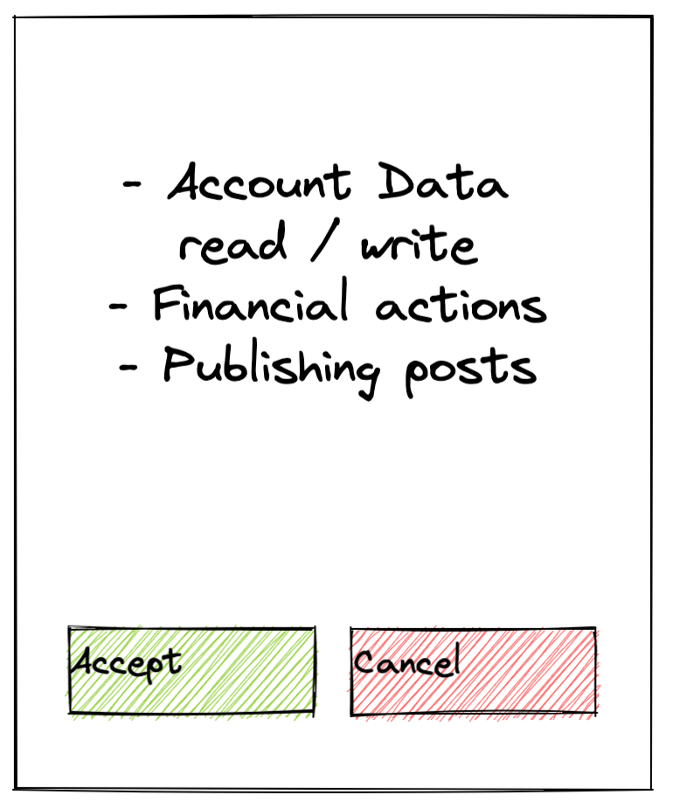 Once the authorization server receives the request it should perform the following steps:

The response is not strictly determined by OAuth 2.0 framework, but depends on tokens type and overall authorization approach that the authorization server implements. Most likely it will contain both refresh and access tokens, their type and expiry period.

Implementation of authorization (scopes check) is not covered by the OAuth 2.0 framework itself and might be implemented in any way. In a very simple case, scopes might be verified just in place by resource server.

It's time for the most interesting question: how do you implement authentication on top of OAuth 2.0? The question became so common that there was a standardized approach to build one more layer called Open Id Connect (OIDC).

Before describing it, let me give you a better idea on which part it covers.

In a very simple case we can ask users "who they are," and just trust them. Therefore, the login form might contain just a singe field like email or user name. In this instance, we are not able to verify identity since a user might enter an identifier of another user. However, now we clearly understand the point: once we know users' identifiers, we could personalize their requests and authorize them to restrict access to resources.

In the most common approach, we ask users to confirm their identity by entering a password. Obviously our assumption is the password is known only to users themselves. In this case, we still need to find a record in DB by user identifier to get all needed data, but only after password is validated successfully.

Why do this step if we receive a user's identifier from a trusted source that confirms the user's identity? It's exactly the mechanism OIDC provides. The point is that OIDC enhances OAuth 2.0 flow and standardizes how to get users' data so that the client does not need to care about the password or another validation, but just use the identifier like in the naive implementation.

One more interesting point is that the registration process is not much different from signing in users. Besides additional users' data it requires users' identifiers to identify them while signing in. That means in some cases OIDC also might cover automated registration if users are signing in for the first time.

Let's take a look at the requests sequence when an application verifies user identity itself. 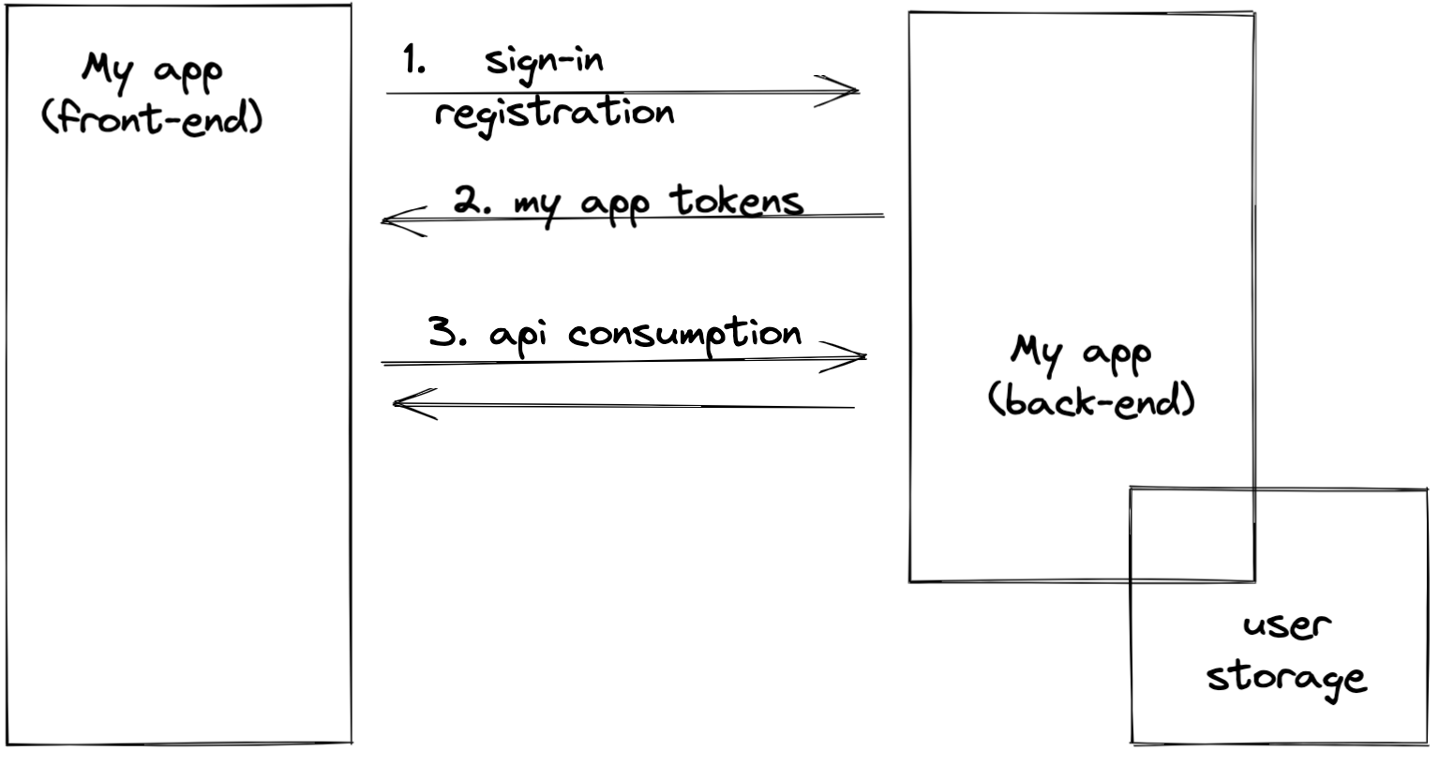 We can see that as a result of authenticate tokens are issues which should be included in further requests so those would be authorized.

In comparison with the previous approach, with OIDC authentication, this option is delegated, but does not change the whole picture much. 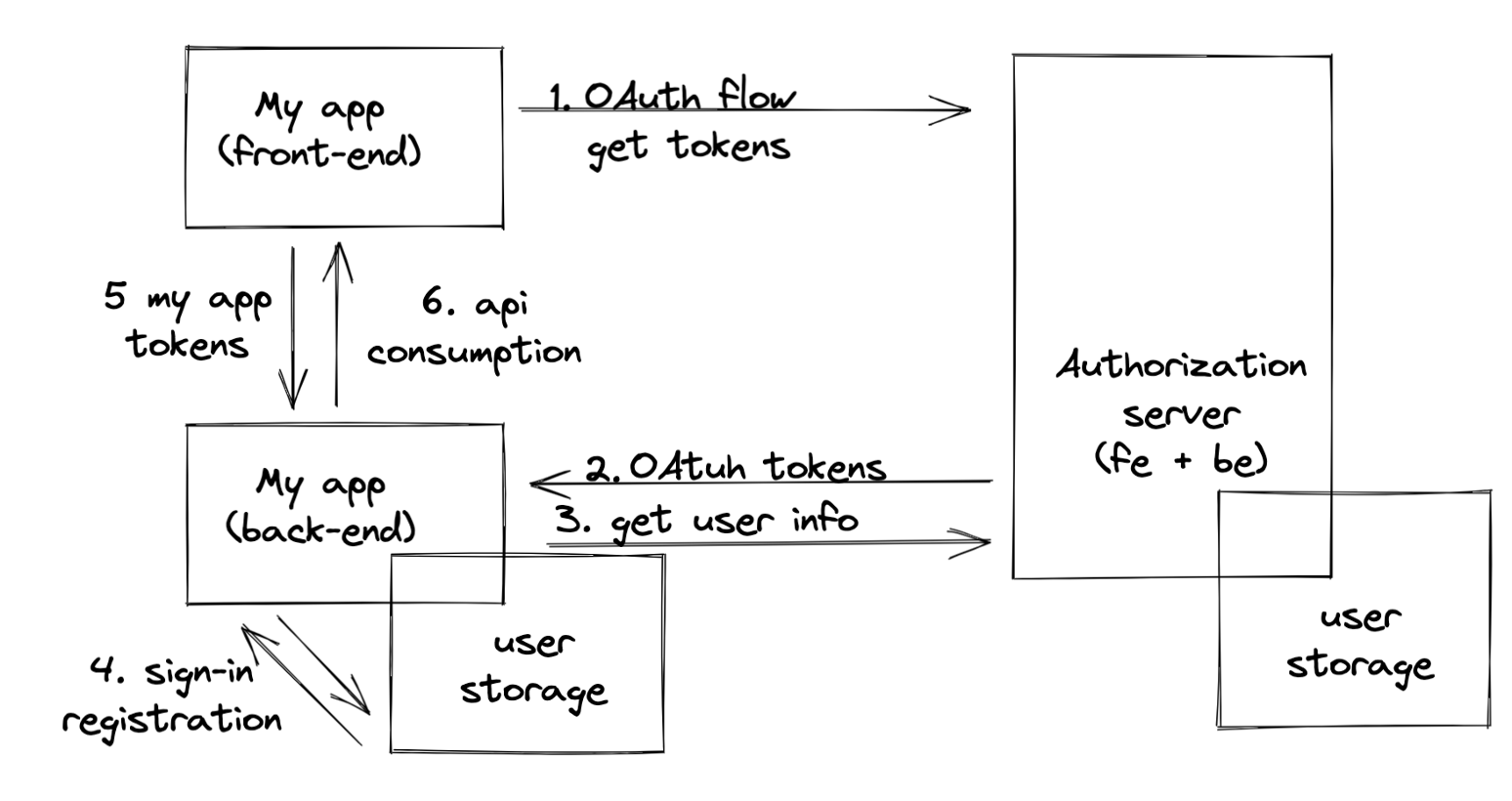 In this article, I've tried to explain how OAuth 2.0 authorization server works in simple words. I hope it will be a good entry point to the topic. When I've faced building a custom OAuth 2.0 server, there were a lot of points which were not so obvious for me and required a lot of research. That is why I wanted to share my experience with you.