So, what is the task and why is it relevant at all? At the moment, there are a million different operating systems written in C. But, for projects that do not need chips from different operating systems and basic functionalities, such as task, events, task notification, critical section, mutexes, and semaphores (although I try not to use them), queues. And all this is needed in a fairly simple form, without special twists.

In my opinion, the native RTOS MAX, written in C ++, is ideal for my projects, and it is a pleasure to worth with.

But, the catch is that our devices must conform to the IEC_61508 standard. One of the requirements sounds like an E.29 Application of a proven-in-use target library. Well, in simple words, if you make a device for compliance with the SIL3 level, then please use libraries that correspond to this level and are time-tested.

Regarding our task, this means that you can use MAX RTOS for such devices, but balls for reliability will not be added. Therefore, the manufacturers of the RTOS make special versions of their operating systems conforming to IEC_61508 standards, for example, FreeRTOS has a clone SafeRTOS, and embOs has an embOS-Safe clone. Of course, manufacturers earn very well on this because the licenses for these OSes cost several thousand.

By the way, a good example is the IAR compiler. The license costs about $ 1500, but the IAR Certified versions cost about $ 10,000. Although I checked on several projects, the output file of the version without a certificate and the certificate are completely identical. Well, you realized that you have to pay for peace.

So, first, we used one operating system. Then, I started using FreeRTOS for my needs, then we switched to another. In general, we constantly had to rewrite the already ready code. In addition, I would like it to look beautiful and simple, so that anyone could understand the code and what is happening. Then, the code support will be a simple work for students and trainees, and the gurus will be able to continue working on innovative devices and not understand the pile of noodles. In general, I want to go about this kind of fossilization: 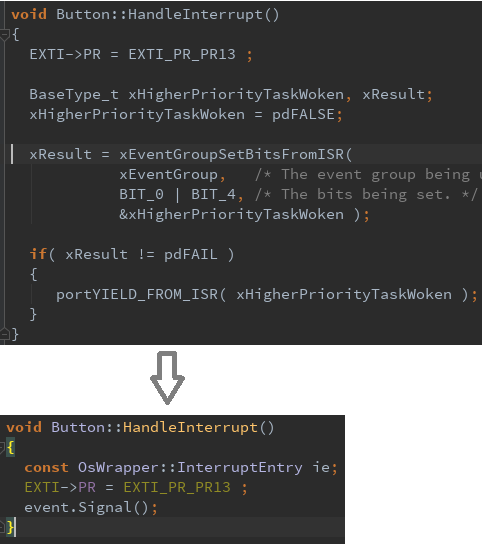 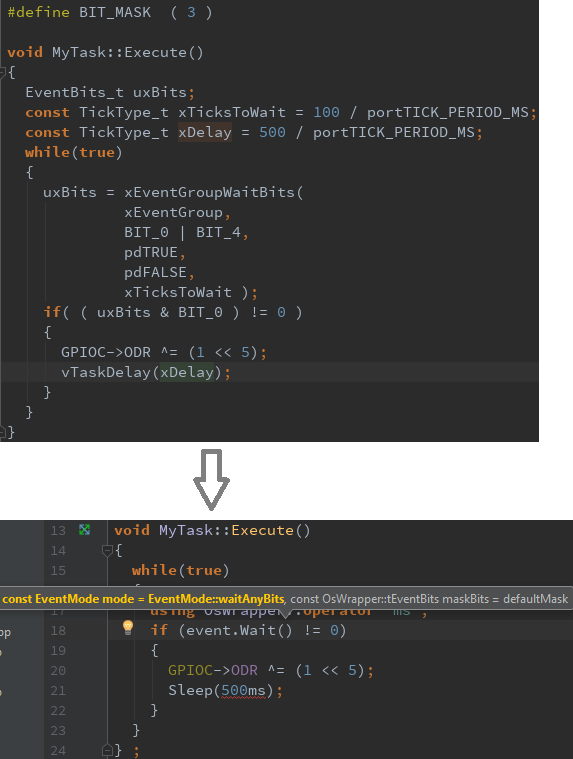 So, I decided to write a wrapper that would fit like FreeRTOS and, say, embOS for all the others, too. To start, I determined that I needed to create the following to be successful:

The wrapper should be SIL3 ideological, and this level imposes many highly recommended things, and if they are completely followed, it will come out that the code is better to not write at all.

But, the fact that the standard regulates a bunch of rules, or rather recommendations, does not mean that they can not be violated. You can, but you need to follow as many recommendations as possible to get more points. So, I decided on some important restrictions:

Now, we are not interested in the question formulated in the article "I allocated 3KB to the operating system and launched only three tasks with a 128B stack, and for the fourth time, for some reason, there is not enough memory." I did this intentionally, for clarity, to show the difference between the dynamic and static allocation of memory with the same settings.

Now, we set ourselves a task — to create a task!

Through long research, British scientists found out that for most  RTOS, the task has a name, stack, stack size, "control block," identifier or pointer to the "control unit," and priority that the function performs in the task. Actually, everything could be crammed into the class, but it was correct when we wrote an operating system with you, but we are doing a wrapper, so you do not need to store all these things in the wrapper. All this will be done for you by the SIL3 ideational operating system, which we are wrapping. As a matter of fact, we need only the function that is executed in the task and the structure that stores the "control unit," which is filled when creating the task and task ID.

Therefore, the class of a task, let's call it  Thread, can look very simple:

It would be desirable to simply declare a class of my task where I could implement all that is necessary and then pass the pointer on an object of this class to a wrapper which would create, the API of the RTOS task, where I would launch the method  Execute ():

In the "all" RTOS, in order for the task to be created, it is necessary to pass a pointer to the function that will be started by the scheduler. In our case, this is the Execute () function, but I cannot pass a pointer to this method since it is not static. Therefore, we look at how the task is created in the API of "all" operating systems and notice that you can create a task by passing a parameter to the task function. For example, in embOS, this will look like:

void * pContext — This is the key to the solution. Let's have a static method, to which we will pass as a pointer to the method called by the scheduler, and as a parameter, we will pass a pointer to an object of type Thread, which can call the Execute () method directly. This is just the moment when we are without a pointer and casting to types, but this code will be hidden from the user:

T algorithm of operations such that permit the scheduler to launch the Run method. A pointer to an object of type Thread  is passed to the Run  method. In the Run  method, the  Execute ()  method, a specific object of the Threadclass, is directly called, which is just our implementation of the task.

The problem is almost solved. Now, we need to implement the methods. All OSes have different APIs, so to implement, for example, the function of creating a task for embOS, you need to call the void OS_TASK_CreateEx (..) method. And, for FreeRTOS in dynamic memory allocation mode, it's xTaskCreate (..). Although they have the same thing, the same syntax and parameters are different. We do not want to run files for every new OS and write code for each of the methods of the class. So, you will need to put it in one file and get it in the form of macros. Fine, but STOP! I forbade macros to myself — you need a different approach, too.

The simplest thing that came to my mind is to make a separate file for each OS with inline functions. If we want to use any other OSes, we will simply need to implement each of these functions using the API of this OSes. The following file is the  rtosFreeRtos.cpp:

Similarly, the file for  embOS rtosEmbOS.cpp:

The types of different operating systems are also different, especially the context structure of the tasks. So, create the rtosdefs.hpp file with our own wrapper aliases:

As a result, for the alteration under any other RTOS, it is enough to make changes only in these two files: rtosdefs.cpp and  rtos.cpp. Now, the Thread and RTOS classes look like c pictures: 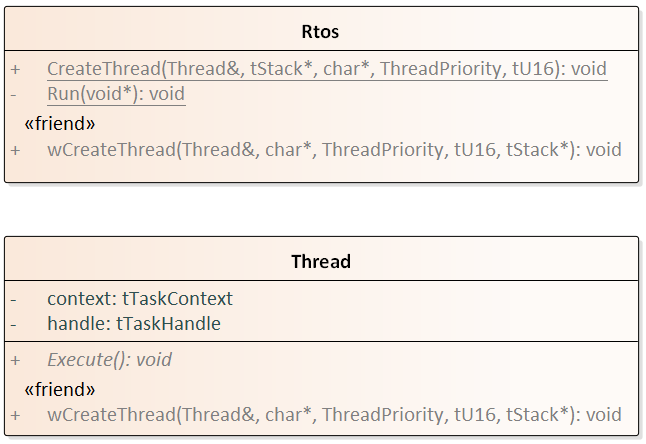 Running the Operating System and Finalizing the Task

For the Cortex M4, "all" operating systems use three interrupts System tick timer. System Service is called via the SWI instruction and the request for the system service, which was actually invented for the RTOS. Some RTOS use other system interrupts, but these will be sufficient for most "all" operating systems. And, if not, then you can add three handlers for these interrupts. To start the RTOS, we will also need a start method:

The first thing I needed was — and without of which I can not live — the mechanism for notifying tasks. I generally like event-driven programming, so you need to implement a wrapper to notify the tasks.

Everything turned out to be quite simple. Any OS is able, well, except maybe UC-OS-II and III. In my opinion, the mechanism of events there is generally tricky.

In order to notify a task, you just need to send the event, not to the void, but specifically to the task. For this, the notification method should have a pointer to the context of the task or the task identifier. For this, I just store in class Thread , with means that the method of the notification should be at class Thread. There must be a method of waiting for an alert. At the same time, we add the method  Sleep (..), which suspends the execution of the calling task. Now, both classes look like this: 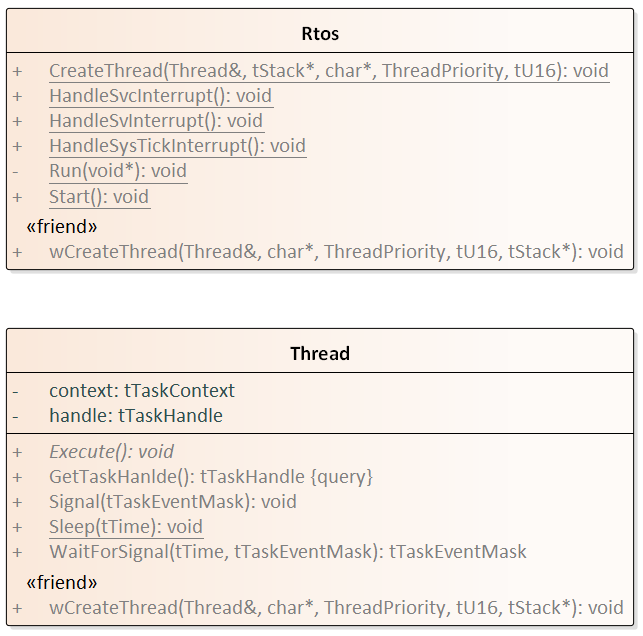 Then, we began to implement. Here, I was in for the first sign of trouble. It turns out that "any" OSes differently causes its functions from interrupts. For example, FreeRTOS has special implementations of functions to execute them from interrupts, say, if there is a function  xTaskNotify (..). Then, it can not be called from an interrupt, but it is necessary to call  xTaskNotifyFromISR (..).
With embOS, if you call any function from an to interrupt, be kind enough to use  OS_InInterrupt ()  when entering the interrupt and OS_LeaveInterrupt ()  on exit. I had to make the class  InterruptEntry, which has only a constructor and destructor:

Obviously, for FreeRTOS, both the constructor and the destructor will be empty. And, for notification, you can use the function  xTaskNotifyFromISR (..), which — without any difference from where it will be called — is a small overhead, but you will not do that for the sake of universality. You can, of course, create separate methods for calling from interrupts, but for now, I've decided to just do it universally.
The same trick InterruptEntry can be done with the critical section:

Now, just add the implementation of the functions with the FreeRtos API to the file and run the test. Although you could not start it, it's clear that it will work.

Well, that's it for part one! Stay tuned for tomorrow's installment on how to refine the task in your project!