This is a two-part article series. This is Part 1 of the series, where we will go over the concept of Dockerization. And then, Dockerize an Ansible playbook to run in a Docker container.

In Part 2, we will create a GitLab pipeline to register the Docker image of the Ansible playbook to a Docker registry and deploy it to Kubernetes.

With the continuously increasing complexity of the business problem domain, building a solution needs a whole lot of dependent libraries and tools with different versions while managing their interdependencies and cross-dependencies. The most challenging area is porting an application to a hosting environment where some of the dependent libraries and packages with specific versions are already installed as part of other applications hosted in the system.  The developer now has to deal with conflicting versions while building and running their application without impacting any existing ones.

With Dockerizing, you can pack your application with everything that you need and ship it as a package and run it in an isolated environment called a container. The good part is you have to do it once and run it anywhere consistently.

Some of the other key benefits are

The key to Dockerization is the Docker engine which interacts with the underlying OS. There is an underlying hardware infrastructure and then the OS on top of it. And then Docker installed on OS. Docker manages libraries and dependencies to run the application. 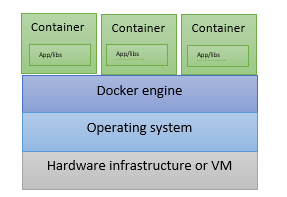 Docker Engine is available on a variety of Linux platforms. It can also run on Windows 10 through a Docker desktop which creates a Linux virtual machine on top of Windows OS.

What is Ansible Playbook?

Dockerize an Ansible Playbook and Run It in a Docker Container

In this tutorial, we will create a playbook that does the following

For this tutorial, we will use Windows PowerShell to run all our commands.

Create a working directory named playbooks and cd to that directory.

Create a file named hello.yaml and copy the below content to it.

In this code snippet, we have two sections, one for each host machine: localhost and remote host defined by the common1 variable. This will be defined in another file called Ansible Inventory File in the next step.

Ansible tasks will be executed on the localhost using a logged-in user to the container and on the remote host by user1. We will cover it later in this article.

Generate Key Pair and Copy to the Target Machine

For passwordless SSH login to a remote host, we need to use private-public key pair.

On Windows PowerShell, run the following command and follow through prompts to generate a key pair ssh-keygen.

Install Docker on Your Local Workstation

NOTE: This step will require a Windows reboot.

This single command will do all that is required to enable WSL and install Ubuntu Linux on your Windows laptop.

This completes the WSL Setup.

Here are the steps for installing Docker Desktop for Windows

Download the Docker Desktop Installer from this web page.

Build and Run an Ansible Playbook in the Docker Container

Create a file named Dockerfile and paste the below content:

In this Docker file, we are listing out tools/libraries that are needed to be installed to build and run our Ansible playbook.

We are creating a user named "Ansibleuser" in the container. This user will be used to run Ansible tasks on the localhost machine.

Please replace <HOST_NAME> in line#22 with the FQDN of the remote host. This will allow the client (in this case, the Docker container) to trust the remote host machine.

This file contains the libraries that will be installed as part of the pip command provided in the Dockerfile. These libraries are needed to run Ansible runner:

Start the Docker desktop that was installed.

This will start a demon process named Docker daemon (Dockerd). It listens to Docker API requests and manages Docker objects such as images, containers, networks, and volumes.

Now open the Windows PowerShell prompt and add “cd” to the playbooks folder (the folder location where you have created all the above files).

This will build an image named hwa. Verify that the image was created by running the below command.

The output will be something as below:

Run the below command to create a container from the image named hwa:

It will print the container ID something as below:

Verify that the container is running by running the below command:

Please note this ID somewhere to refer to later.

Execute the Ansible Playbook in the Docker Container

Login to the container by running the below command. Please make sure to replace <container-id> with your container id.

This will let you log into the Docker container giving you a bash shell to interact with.

If you run the ls command, then you will find all your Ansible-related files below:

Now run the Ansible playbook by running the below command:

Congratulations! You successfully Dockerized your Ansible playbook and executed the playbook in a container.

In Part 2, we will push this to the Docker registry and then deploy it to K8s.