When deploying IBM App Connect Enterprise integrations in containers there are options around how we deploy the runtime, the configurations, the integration flows and environment specific data. All the movable parts can either be “included in the image,” “configured at deploy time,” or a mixture of the two. In this article, we will explore these different deployment options, the benefits of each, and considerations for taking each approach.

What Changes When We Deploy IBM App Connect Enterprise in Containers?

What Is a Container Image and What Should Be Included in It?

A container image is a read-only template which is used to create instances of containers. Anything not included in the image can then be sourced during the creation of the container. It is not part of the deployed image, but will be available in the running container.

Therefore, when deploying IBM App Connect Enterprise into container environments there is a decision to be made on how much of the configuration (including external libraries, drivers, etc.), flows, and environment settings should be included as part of the image being deployed.

Figure 1: Shows what is included in each container image type

Sometimes, the following terms are associated with the scale shown in Figure 1:

Most organizations will fall somewhere between these two extremes, but most commonly we see people using the image types C and D from Figure 1.

All options represented in the diagram are valid ways of building and deploying integration containers. Generally, the decision as to which approach to take relates to secondary considerations such as image management, skills within a team, non-functional requirements (testing, security), and management of the live environment.

IBM provides a pre-built container image for IBM App Connect Enterprise in the IBM Entitled Registry. This image contains pre-integrated database drivers and the MQ Client. Note that this pre-built image can only be used in conjunction with the App Connect Operator. On deployment of the image, you can specify the location of a remote BAR file and links to configuration information, and the container will draw those in during start up. Used in this way, it is therefore an example of Image type B in Figure 1. It is also possible to build new images based on the pre-built image, adding server configuration, a BAR file, or even environment configuration in order to create image types C, D, or E.

Whilst the pre-built image covers most scenarios, there will always be circumstances where teams would prefer to create a completely custom image. A sample is provided on GitHub for this purpose. However, there are many advantages to using the pre-built image with the App Connect Operator, as described in the following articles:

New images can be based on existing images.

Figure 2: Basing images on other images

Image 1 could be deployed, adding the BAR file and server configuration at deployment time. Alternatively, further images could be built by layering configuration (e.g. server.conf.yaml) and code (e.g. the BAR file) on top of the first image as in Image 2 in Figure 2. In this case we would only have to add the environment specifics at deployment time.

We could go even further and create an image for each environment that the integration will be deployed to as in Image 3 in Figure 2. In this case we could simply deploy the image and it would automatically contain all the environment specific information required.

These images are hierarchical, relying on each other, meaning a level of management is needed. Part of this management is the responsibility of ownership of the images, from the template owner through to the application teams owning environment specific images and containers.

Having a single container with everything deployed into it doesn’t mean just one image to manage. All three images shown in Figure 2 will need to be managed and consideration given when making changes, i.e. how a change in Image 2 might impact the top level of images (Image 3) with environment specific configurations.

The illustration below provides an example of an image hierarchy where images have been created down to the level of each environment. Let’s look at the implications of this: 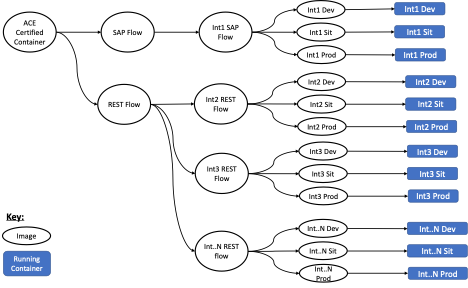 We can see that making a change to an upstream image (such as “Rest Flow”) potentially affects many downstream images and could cause a cascade of image updates to be required.

On the one hand, this might be considered good for governance as it enforces that all images share a known base. On the flip side, small changes to images at the base of the hierarchy could result in sweeping changes, which detracts from the isolation and decoupling we’re trying to achieve in more fine-grained deployment.

Certain groups of integrations will share common aspects. The IBM App Connect image from the IBM Cloud Container Registry provides a good base template containing database drivers and the MQ Client. Further templates can be built on top of that to include any additional elements and can be used as "Enterprise Templates" to be managed and maintained by the organization for all future integrations of a given type.

Such elements found in Templates are well-suited to be “included in the image” rather than “configured at deploy time.” Examples might include the addition of database drivers, certain client libraries and agents, and maybe even standardized sub-flows for things such as error handling.

The core App Connect Enterprise runtime configuration is detailed in the server configuration YAML file (server.conf.yaml). Certain settings in that server configuration can also be included as part of an image template to implement organization wide standards and defaults. Examples might include administrative role mapping, configuration for offloading logs to an external system, and more. 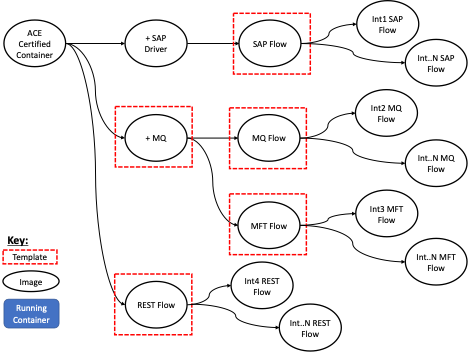 This section looks at a few key considerations for IBM App Connect Enterprise when deciding what to include within the container image.

IBM App Connect Enterprise is a rich runtime with a lot of additional configurations that can be deployed to describe the integration server, the container itself, the integration flow, and environment variables for each of these. This exacerbates the potential for environmental drift when configuring entirely at deploy time and the complexity of the build when configuring during the build of the image.

Implementing integrations inherently means that there are more configurations compared to traditional application development. For example, for each integrated system there are connectivity settings, clients, drivers, credentials, etc. Furthermore, getting those configurations exactly right is critically important to the functioning of the integration application.

In Figure 1, we see different approaches for how much of these different types of configurations can be included in the image.

Choosing an image strategy more towards the left of Figure 1 can lead to a very large number of live configurations to manage when configuring them all at deploy time. As we move toward the right of Figure 1, we include more of these configurations within the boundaries of the image. This reduces the potential for environmental drift and enables testing during image build time to catch errors and issues before deployment into each environment.

However, the more configuration you build into the image, the more images you will have to manage, to the point where in the furthest right column of Figure 1, you would have a different image for each application for each environment.

Observations from the Field

As organizations begin this journey, we are often asked how other customers are performing their own container deployments.

All the approaches shown in Figure 1, from using the certified container and configuring everything on top at deploy time, through each of the five approaches to having environment specific images, are valid deployment styles.

Some of the customers we have worked with have been concerned around environmental drift and as such have included as much configuration into the image as possible, up to and including the BAR file. These customers tend to configure environmental specifics at deploy time in a bid to reduce the number of images they need to manage.

Other customers have gone a step further and created images for each environment, however we have not seen enough customers doing this to see this as a general trend.

Given the number of styles available and the number of implementation decisions to be made, there is no reason why the deployment style cannot be refined as the organization better understands the implications.

As organizations transition more into container-based deployment models, there is a significant change in how we approach the build and deployment of IBM App Connect integrations.

There is no "one size fits all" when deciding which style of container-based deployment to adopt. It is important to understand how these changes will impact your organization, its needs, and ways of working. You need to explore questions such as the following:

Stay tuned to this series for some practical examples of including configuration in images and building image hierarchies.

Acknowledgement and thanks to Carsten Boernert as co-author of this article and Kim Clark, Rob Convery, and Ben Thompson for providing valuable input.

Published at DZone with permission of Aiden Gallagher. See the original article here.