Aside from holding the publish-subscribe messaging system functionality, Apache Kafka is gaining outstanding momentum as a distributed event streaming platform. It is being leveraged for high-performance data pipelines, streaming analytics, data integration, etc. Additionally, standing as a backbone for IoT data platform to handle massive amounts of heterogeneous data ingestion.

Despite surfacing tremendous usefulness related to data transportation, numerous Kafka connectors for import/export of data from various data systems, still, Kafka client library is an obstacle for any programming language other than Java to serve as producer/consumer of messages to Kafka topic.

Apache Kafka offers its functionality through a well-defined set of APIs. With the help of the client library, we can interact or communicate to those Kafka’s APIs but the client library is limited to Java only. Even though Kafka provides a bunch of CLI tools, they are just thin wrappers over the Java client library. Due to this limitation, many programming languages lack officially supported, production-grade client libraries for Kafka.

The Confluent Platform that uses Apache Kafka as their central nervous system officially supports client libraries for C/C++, C#, Go, and Python. To overcome the above bottleneck, Confluent has developed a REST Proxy module to expose Apache Kafka’s APIs via HTTP. Since HTTP is a widely available and universally supported protocol, any programming language without banking on Kafka’s client library can interact with the Apache Kafka APIs. The Kafka REST proxy works as a RESTful web API. Any application developed irrespective of any programming language and having the capability to send and receive HTTP/HTTPS messages, can be configured to operate with Kafka cluster. The Confluent REST Proxy is a component or sub-module of the entire Confluent Platform.

To use the Confluent REST Proxy module independently with operational multi-node multi-broker Apache Kafka cluster, we can either download the source code from the GitHub repository and build or can download the prebuilt versions which is a part of the Confluent Platform.

In this article, I am going to detailing out the steps to integrate the prebuilt versions of Confluent REST Proxy with running a multi-broker Apache Kafka cluster with subsequent, publish and consume simple messages from a terminal/CLI without using any built-in scripts. To enhance better readability, the article has been segmented into four parts.

Considering three nodes in the cluster and each one of them already installed and running with Apache Kafka of version 2.6.0. Similarly, the Zookeeper server (V 3.5.6) is a separate instance on top of OS Ubuntu 14.04 LTS. All the nodes in the entire cluster had configured with Java version '1.8.0_101". Besides, the Kafka cluster is configured with three brokers and two topics. Each topic has three partitions. There is no need of changing any existing configuration w.r.t topics and partitions for clubbing the REST Proxy module.

Even though the Confluent platform accommodates Apache Kafka, Zookeeper, KSqlDB, REST Proxy, Schema Registry, etc together as a suite, here only the REST Proxy will be integrating or hooking up with independently running Kafka cluster. In short, this procedure eliminates the data migration or shifting of stored messages that existed on topics from the operational Kafka cluster to the Confluent platform.

Downloaded prebuilt version confluent-community-5.5.0-2.12.tar from here under the Confluent Community License. This procedure is not recommended for commercial/ production use without a valid license from Confluent.

As mentioned above, copy and extract/untar the confluent-community-5.5.0-2.12.tar with root privilege under /usr/local/.

Navigated to /usr/local/confluent-5.5.0/etc/kafka-rest and modified the kafka-rest.properties file to update the values of the following keys:

To define the unique id of the Confluent REST proxy server instance. Ideally, it is used in generating unique IDs for consumers that do not specify their ID.

In this integration, not provided the URL of Schema Registry because decided not to publish any messages with complex data types. Instead, will use basic data types like String, int, etc while publishing messages to the topic using terminal or REST client browser plug-in. But it is highly recommended to use Schema Registry URL in the production environment to allows the evolution of schemas:

The list of Kafka brokers to connect that runs on multi-node cluster separated by comma (,). For a single-node Kafka cluster, it should be: 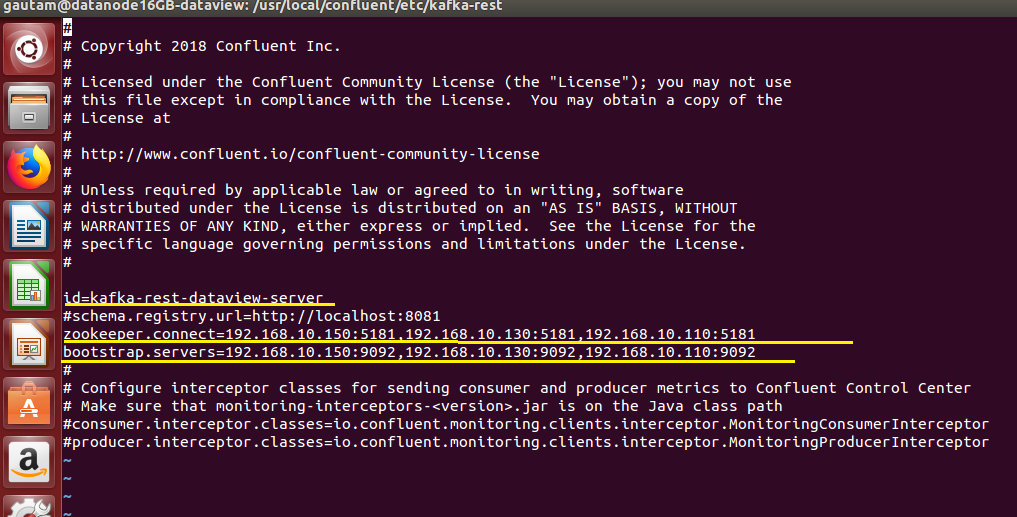 Since we are not using Confluent Control Center, so rest of the keys should be kept commented only.
To run the Kafka REST proxy, navigate to the bin directory under confluent-5.5.0 and execute the script "kafka-rest-start" with the location of the kafka-rest.properties as a parameter.

Eventually, Kafka REST proxy will start with the following messages in the same console/terminal.

To make sure Kafka REST proxy is up and running, open a new terminal, type the following command and check the list of available topics that already created on the cluster.

Producing and Consuming Messages via Terminal/CLI

In this section, I have demonstrated how easily we can publish and consume messages from the topic without writing a single line of java and not by executing built-in scripts like kafka-console-producer.sh and kafka-console-consumer.sh.

3. And finally consumed the produced message. Consumer instances are removed if idle for 5 minutes so publish the message and consume subsequently from the topic to verify.

You can watch the following video for a better understanding of the screen recorded while executing this exercise.

The Confluent Inc. has developed this excellent component as part of their complete event streaming platform which can be utilized for:

At last, Confluent’s Kafka REST proxy is of utmost value, when there is a limitation to utilize the Kafka client library straightforwardly.