DevOps methodology continues to strengthen its position in programming. So-called “continuous” tools are among the most commonly used in the field. Such practices as Continuous Integration and Continuous Delivery allow you to constantly keep your code delivered into production as soon as any changes are made. This makes it possible to add new features in progress and fix the bugs on the go, as you work with small chunks of code, which are easy to operate. CI/CD methodology of software development brings reliability and speed to product creation, allowing it to hit the market faster.

CI is the first stage of the CI/CD technique. There are a lot of benefits of Continuous Integration implementation in your project. It is an essential process of a software update, and its primary function is to integrate code changes from various developers into a single information repository.

Today we will focus on the second stage of CI/CD, Continuous Delivery. It helps to ensure that the code is ready to be delivered. Its main feature is the automatization of the processes such as code building, testing, and delivery, which helps to elude errors early and minimize risks. This makes the process of code delivery more accessible and faster.

According to the State of Continuous Delivery Report, 50% of 19,000+ developers noted that they make deployments with a frequency of once per week to once per month. 2/3 of them need at least one week to successfully run code into production after it was committed. Half of the developers claimed that it takes one day to restore service in case of an unexpected outage.

According to Continuous Delivery practice, teams develop software in small parts, and the product release is not performed manually but by pushing just one button. Every small change in the code is automatically built, tested, and released into production. The automatic testing should be standardized for various development environments, as it will help quickly find weaknesses and optimize them.

This makes the development process more sustainable and reduces the risks of errors at the finish line, as more frequent changes and checkups can be made throughout all development processes. To sum up, CD helps to release changes in small sequences, allowing users to modify or dismiss them if necessary through testing.

How Does CD Work?

After code modifications, the CD automatically prepares the testing environment and integrational tests performance. The testing can be manual or automated. Manual testing is performed by an individual or a team, operating the product and ensuring it performs as expected. Automotive testing includes various tools that may check isolated code correctness and simulate the human-driven manual testing experience. Such testing may consist of user interface testing, loading testing, integration testing, API reliability testing, etc.

After CD releases the product into production, which may also be automatized and performed manually. There are several requirements to the process:

Code review is a standard tool for CDs. It’s a systematic check of source code aiming to find and correct bugs that were not noticed at the primary stages of development. Sometimes a dark launch of a product is used to collect the reviews from the clients. After the range of users interacted with a product, specific changes may be made according to their feedback. Such releases are often related to technologies like Reserved Proxy, Load Balancing, A/B testing, etc.

Automatization processes of Continuous Delivery bring many benefits to the team and the project. Its core value is that it makes the deployment process more accessible, which positively affects productivity and lowers the risk of burnout in the group. It results in lower costs spent on the development process. Let’s specify how your company may benefit from the implementation of CD tools into your workflow: 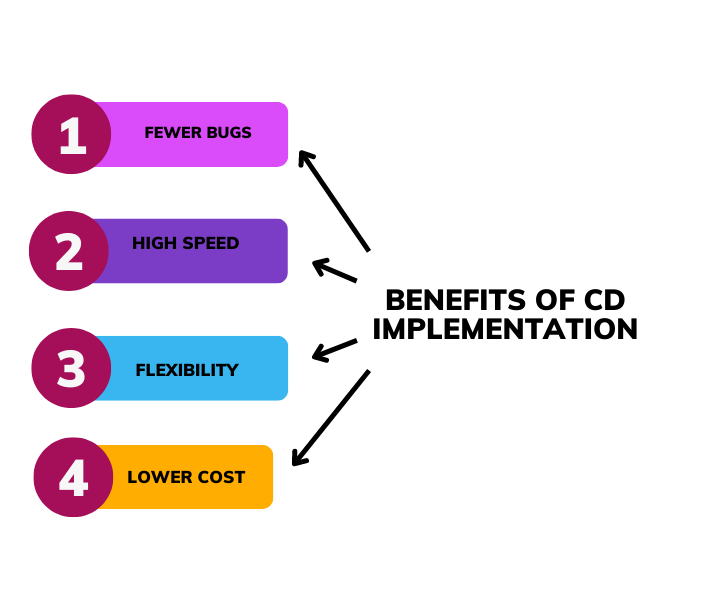 The most challenging in implementing CD tools is that some of the working processes should be rebuilt. Those developers who are used to the long development cycle may have to change the whole method they were working by. The implementation should be gradual and start with the most labor-consuming applications.

The second problem may occur with many code branches, resulting in conflicts and time loss. To avoid this, you may consider using the no extensions approach.

Also, keep in mind that any code commit may be released anytime. Such an instrument as a feature toggle may help in this case if the product is not yet finalized for consumer use.

Last but not least, testing can take a lot of time. The test residuals usually have to be analyzed manually. The possible solution is to make parallel testing in the first stages of CD implementation.

As you can see, using CD in your development process may help you bring your product to the market faster to be among the pioneers of particular technologies or start getting a profit sooner.

Using CD tools requires the whole team to work together and be well-coordinated. The technology has several stages, such as managing the process, testing, and defining whether the product is ready to be delivered, which involves different departments and constant collaboration. Thus, implementing this practice into your workflow, keep in mind that you should hire good specialists and seek synergy between colleagues. In this case, there is a particular set of soft skills that may help you create a solid and devoted team.