Over the most recent couple of years, there has been a huge development in the appropriation of Apache Kafka. Kafka is a scalable pub/sub system and in a nutshell, is designed as a distributed multi-subscription system where data persists to disks. On top of it as a highlight, Kafka delivers messages to both real-time and batch consumers at the same time without performance degradation. Current users of Kafka incorporate Uber, Twitter, Netflix, LinkedIn, Yahoo, Cisco, Goldman Sachs, and so forth. Can refer here to know about Apache Kafka

Preceding pen down the article further might want to stretch out appreciation to all the wellbeing teams beginning from the cleaning/sterile group to Nurses, Doctors, and others who are consistently battling to spare mankind from continuous Covid-19 pandemic over the globe.
This article has structured in four parts:

Here I am considering three nodes physically separated from each other in the cluster and each system is already loaded with OS Ubuntu 14.04 LTS.

Install and Configuration of Kafka

Downloaded Apache Kafka of version 2.3.1 from Apache Download mirror and extracted the tarball. 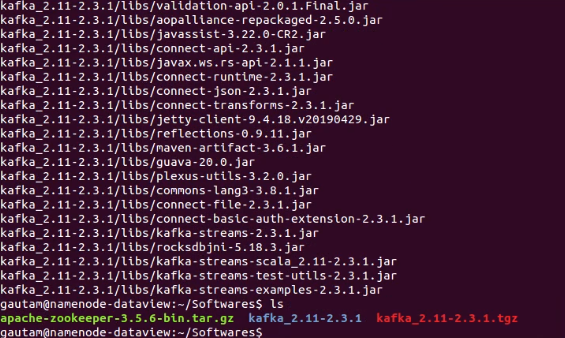 After extraction, the entire directory “kafka_2.11-2.3.1” moved to /usr/local/kafka. Make sure we should have “root” privilege.

Once above steps completed in one node, repeat the same on other remaining nodes in the cluster. We can SCP the entire extracted directory “ kafka_2.11-2.3.1″ or the downloaded kafka_2.11-2.3.1.tgz. As a configuration step, navigate to “config” directory available inside “/usr/local/kafka” and open the server.properties in vi editor to manipulate/update key-value pair. The following keys should have corresponding values.

Please visit here to read more about Kafka optimization partition calculation. Since our number of nodes in the cluster is less and intended to consume and produce very less message so we set the value as 5. You can set it as 1 if considering the cluster for leaning purposes.

There is an option to increase or decrease the number of partitions in a specific topic in the configured/running Kafka cluster. Here is the command to execute that inside the bin directory of Kafka.

The rest of the key-value pairs we won’t modify since they are mostly related to the production environment. Repeated the above changes on the other two remaining nodes in the cluster.

Now, a topic needs to be created on each node in the cluster and can be done by executing the following command inside bin directory available under the home directory of Kafka.

Run and Verify the Cluster

Before starting the Kafka server that is installed and configured on each node in the cluster, we need to make sure the zookeeper server on each node is running successfully.

Once zookeeper servers up and running in the entire cluster, let’s navigate to bin directory available inside the home directory of Kafka on each node and execute the command as

We can verify the log file for any error after starting of each Kafka server in the cluster.

To verify the entire Kafka cluster without developing and running an explicit producer, consumer program, quickly we can execute console producer and consumer script to send some dummy messages as well as consume subsequently. The scripts kafka-console-producer.sh and kafka-console-consumer.sh are available inside the bin directory. To send messages into multiple brokers at a time.

Similarly, to consume those sent messages from a particular broker’s topic.

Here are the few lines of code of a producer to send messages into a specific partition of a Topic as well as consumer code to read the messages from the particular partition of a topic.

The above code snippet is just for a better understanding of how to produce and consume messages programmatically to a specific partition.

Hope you have enjoyed this read. You can try in AWS EC2 Linux instances if hardware infrastructure is not available.