In this article, we will see how to create an empty ASP.NET Web Application with .NET CLI and Visual Studio Code. In the previous article of this series, we already covered the below articles:

I recommend you to go through these articles first if you are new to this series or new to .NET Core technology.

Once SDK is installed, Open Visual Studio Code Editor. If you don’t have it already installed in your system, then go to the Microsoft official site in order to download it free of cost. Once downloaded and installed, Go to the Terminal menu, click on New Terminal. 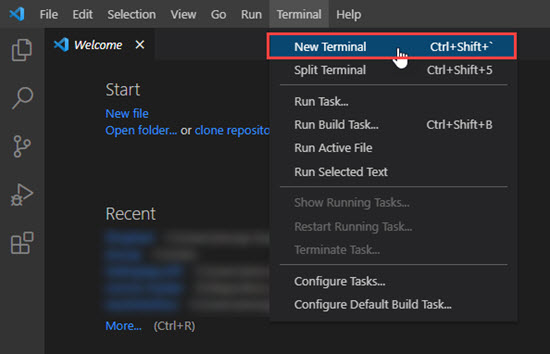 You will see the terminal as shown in the below image.

Change the directory to the location where you want to create your first ASP.NET Core Web Application with .NET CLI. In my case, I already created a folder on the desktop (and named it Project).

Run the dotnet command in the terminal. If .NET Core is already installed in your system, then you will see the options as shown in the below image:

Run the dotnet --version command in order to check the version of .NET Core SDK installed in your system. In my system, I have .NET Core 3.1.402 Version.

As you can see, we can create several kinds of projects through .NET Core CLI. In this example, I am going to create an ASP.NET Core Empty project. 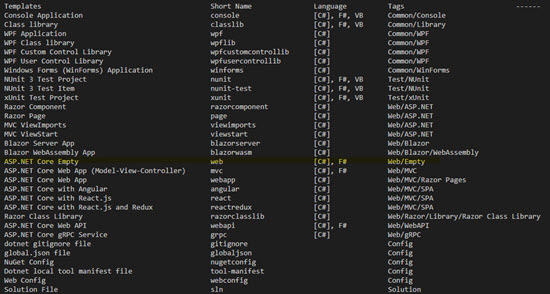 Once the application is launched successfully, copy or click on the URL on which your application is running. You can see Hello World! on the screen which is basically coming from the startup.cs class.

Now let’s open that project into Visual Studio Code. We can directly open the folder through the File menu and clicking on the open folder menu option or by running code .in the terminal as shown in the below image.

On opening the project for the first time, A message is prompted to add the required assets to build and debug the application. Click on Yes. Upon clicking on Yes, a folder, i.e., .vscode will be created in the project.

You can see that our ASP.NET Core project is opened in the Visual Studio Code editor with the structure as shown in the below image. (Please check Project Structure in ASP.NET Core 3.1 Web Application in case you want to understand the project as well as files structure and its role.) 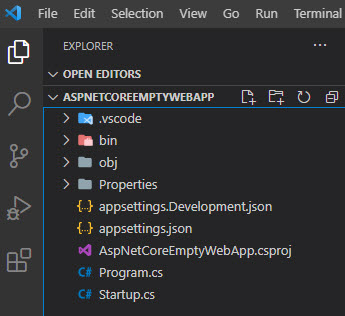 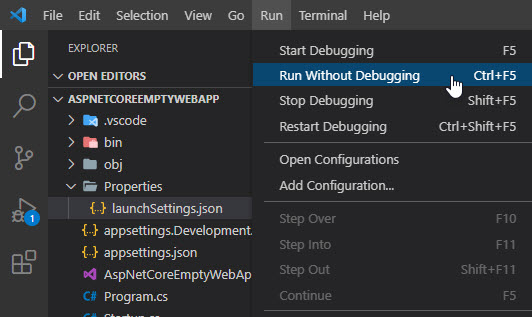 And then go to the Run menu and then click on the Start Debugging option. Once the application reached the breakpoint, it will be highlighted (in a similar manner as in Visual Studio IDE). You can do step in, step out, add items to the watch window, etc. 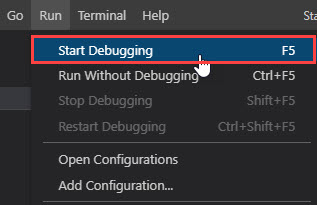 I hope this article will help you in getting started with creating and managing the ASP.NET Core web application with .NET CLI and launching and debugging it through Visual Studio Code.