[This blog was syndicated from http://blog.grallandco.com]

When I was looking for a more effective way to create my cluster I asked some sysadmins which tools I should use to do it. The answer I got during OSDC was not Puppet, nor Chef, but wasAnsible.
This article shows you how you can easily configure and create a Couchbase cluster deployed and many linux boxes...and the only thing you need on these boxes is an SSH Server!
Thanks to Jan-Piet Mens that was one of the person that convinced me to use Ansible and answered questions I had about Ansible.
You can watch the demonstration below, and/or look at all the details in the next paragraph.

Ansible is an open-source software that allows administrator to configure and manage many computers over SSH.
I won't go in all the details about the installation, just follow the steps documented in the Getting Started Guide. As you can see from this guide, you just need Python and few other libraries and clone Ansible project from Github. So I am expecting that you have Ansible working with your various servers on which you want to deploy Couchbase.
Also for this first scripts I am using root on my server to do all the operations. So be sure you have register the root ssh keys to your administration server, from where you are running the Ansible scripts.

So before going into the details of the Ansible script it is interesting to explain how you create a Couchbase Cluster. So here are the 5 steps to create and configure a cluster:
So the goal now is to create an Ansible Playbook that executes these steps for you.

The first think you need is to have the list of hosts you want to target, so I have create a hosts file that contains all my server organized in 2 groups:
The group [couchbase-main] group is just one of the node that will drive the installation and configuration, as you probably already know, Couchbase does not have any master... All nodes in the cluster are identical.
To ease the configuration of the cluster, I have create another file that contains all parameters that must be sent to all the various commands. This file is located in the group_vars/all see the section Splitting Out Host and Group Specific Data in the documentation.
Use this file to configure your cluster.
Let's describe the playbook file :
As expected, the installation has to be done on all servers as root then we need to execute 3 tasks:
So we have now installed Couchbase on all the nodes. Let's now configure the first node and add the others:
Now we need to execute specific taks on the "main" server:
Then the system needs to ask all other server to join the cluster. For this the system needs to get the various IP and for each IP address execute the add-server command with the IP address. As far as I know it is not possible to get the IP address from the main playbook YAML file, so I ask the system to generate a shell script to add each node and execute the script.
This is done from the line 09 to 13.
To generate the shell script, I use Ansible Template, the template is available in the couchbase-add-node.j2 file.
As you can see this script loop on each server in the [couchbase-nodes] group and use its IP address to add the node to the cluster.
Finally the script rebalance the cluster (line 16) and add a new bucket (line 19).
You are now ready to execute the playbook using the following command :
I am adding the -vv parameter to allow you to see more information about what's happening during the execution of the script.
This will execute all the commands described in the playbook, and after few seconds you will have a new cluster ready to be used! You can for example open a browser and go to the Couchase Administration Console and check that your cluster is configured as expected. 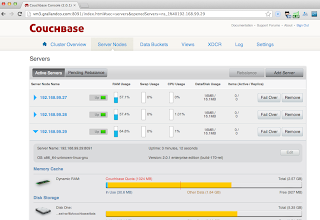 As you can see it is really easy and fast to create a new cluster using Ansible.
I have also create a script to uninstall properly the cluster.. just launch
cluster Ansible (software)