In addition to D3, there are other popular and powerful libraries such as ECharts and Chart.js. However, they are highly encapsulated, leaving too little room for customization.

In the contrary, D3 is highly customizable thanks to its support for event handling for SVG elements. It can bind arbitrary data to the document object model (DOM) or directly operate W3C DOM API on the DOM.

For those who want full control of their graph layout, D3 is definitely a go-to choice.

For social networks analysis, D3-force directed graph is the best choice. It is a module realized in D3 by simulating the velocity Verlet numerical integrator for physical forces on particles. Each node in D3-force can be regarded as a discharge particle, and there is repulsion (Coulomb repulsion) among the particles. At the same time, these particles are connected by the edges among them, thus generating traction.

Because of the repulsion and traction, particles in D3-force continuously shift from the initial state of random disorder to a balanced and ordered layout. The velocity Verlet numerical integrator controls the order of particles and edges. The graph generated with d3-force contains only nodes and edges and there is only a small collection of graph samples for reference because most graphs are customized.

The following is a popular network diagram I found that is realized with D3-force. Apparently it is too simple for some use cases. So if yours is more complex than that, then you have to create your own graph. 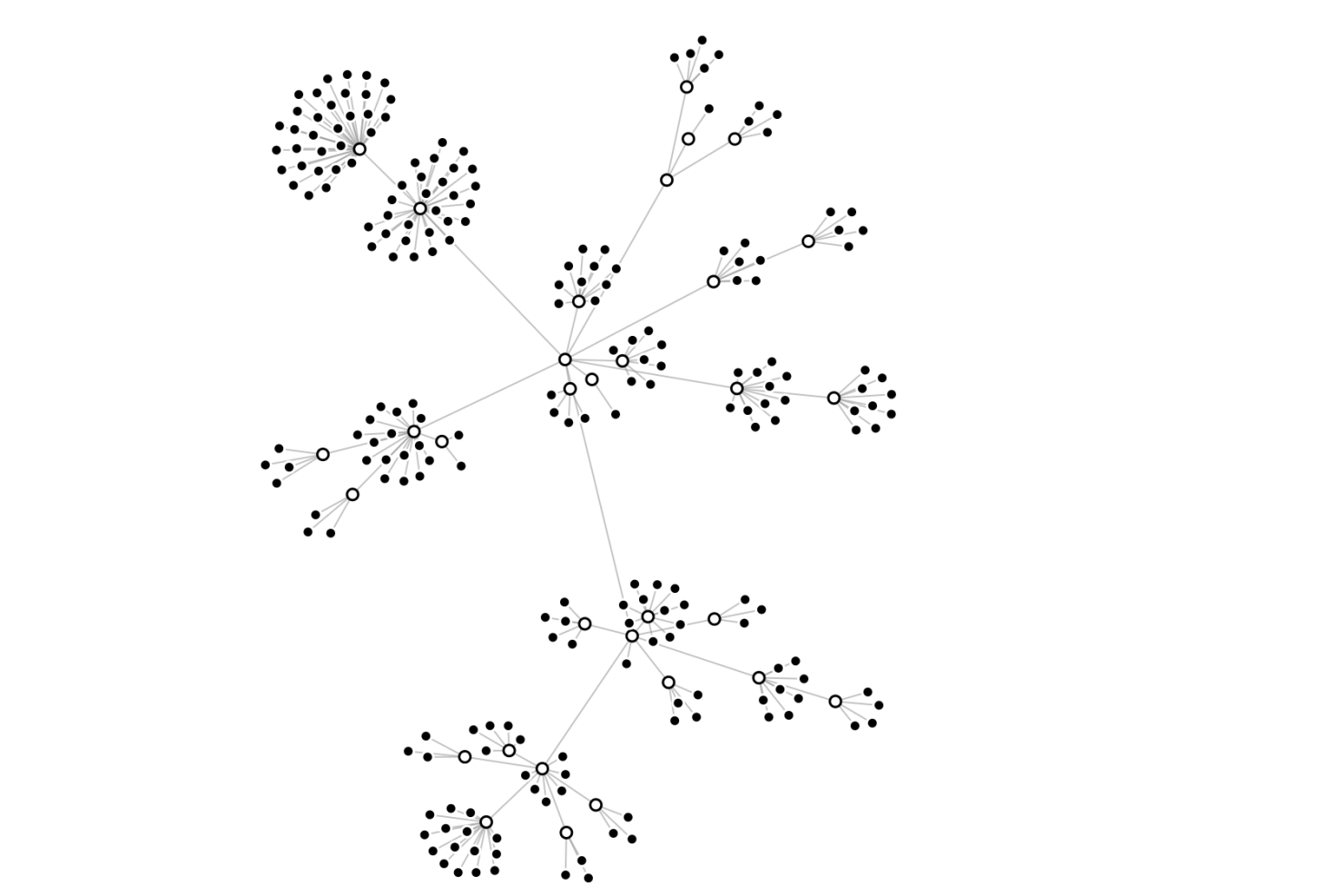 In Nebula Graph Studio, we use the D3-force directed graph to analyze data relationships because the nodes and edges show the data connections intuitively and it allows graph exploration via graph query language. Moreover, the graph data can be updated by synchronizing the operations on the DOM to the database, which deserves another article to cover.

Let’s build a simple D3-force directed graph to illustrate how D3.js displays data connections and share some layout optimization ideas based on this example.

The code above generates a graph as below: 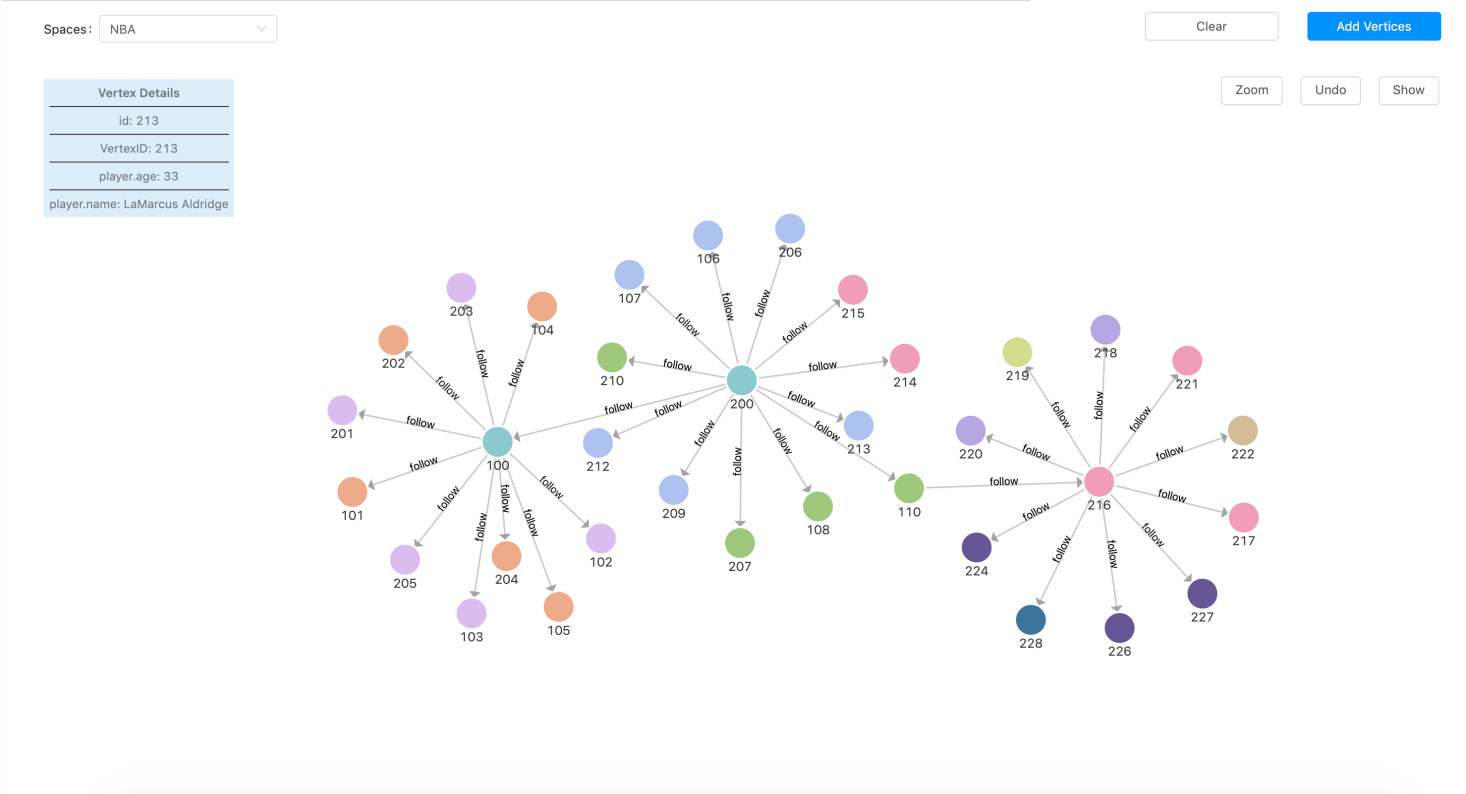 The D3.js enter() API processes the new nodes independently. When new nodes are queried and pushed into the nodes array, the API renders them according to the coordinates assigned by the D3-force instance, without changing the information (x, y coordinates included) of the existing nodes.

From the perspective of API, this is definitely understandable. But the newly added nodes can not be handled just with a simple push to the existing D3-force instance because the d3.forceSimulation() module assigns location coordinates randomly.

The coordinates assigned by d3.forceSimulation().node() are random, so are the locations of the explored nodes. Together with the collied and link parameter, nodes associated with the new ones are close to each other under the influence of tractive force.  Also, there are collisions among other nodes in the process of approaching. When there are nodes on the force-directed graph, these newly added nodes will make the entire graph collide under the effect of the collision and traction until each node finds its own place. That means the movement only stops when the collision and traction both meet the requirement. Does it look like the Big Bang? 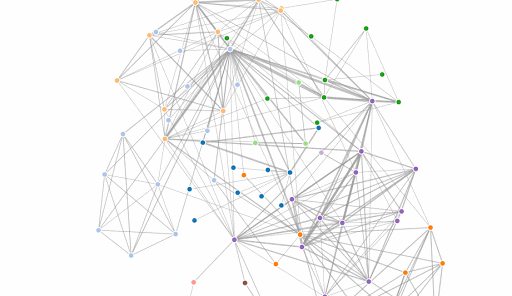 There are two problems in the above process:

However, this is how the the enter() API is designed.

One solution is to process new nodes and the existing ones separately, which means each node rendering requires traverse to determine whether it is new or existing. Not a performant solution, especially when the quantity is large.

Another common solution is to reduce the collision and increase traction of the D3-force instance. In this way, the nodes find balance state more quickly so that the entire graph is stable. This is a better solution but the disadvantage is that it makes the connection among nodes varies remarkably in length and the graph size is huge. So it’s not an ideal solution for cases with huge data.

We’ve come up with a new solution.

Although such solution still affects the nodes within a small range, it will not greatly affect the trend of the entire graph. The key codes are as follows:

If there’s no source node, then the new node appears at the center of the graph. This will pose less effect on the existing nodes thus is worth considering.

When there are multiple edges between two nodes, the following problems occur:

Below is how we solve the above problems:

Refer to the following code for better understanding:

After allocating linknum to each edge, the sign of linknum is judged in the tick event function that monitors the edges. We only need to judge and set the curvature and direction of the path.

Here’s how it looks: 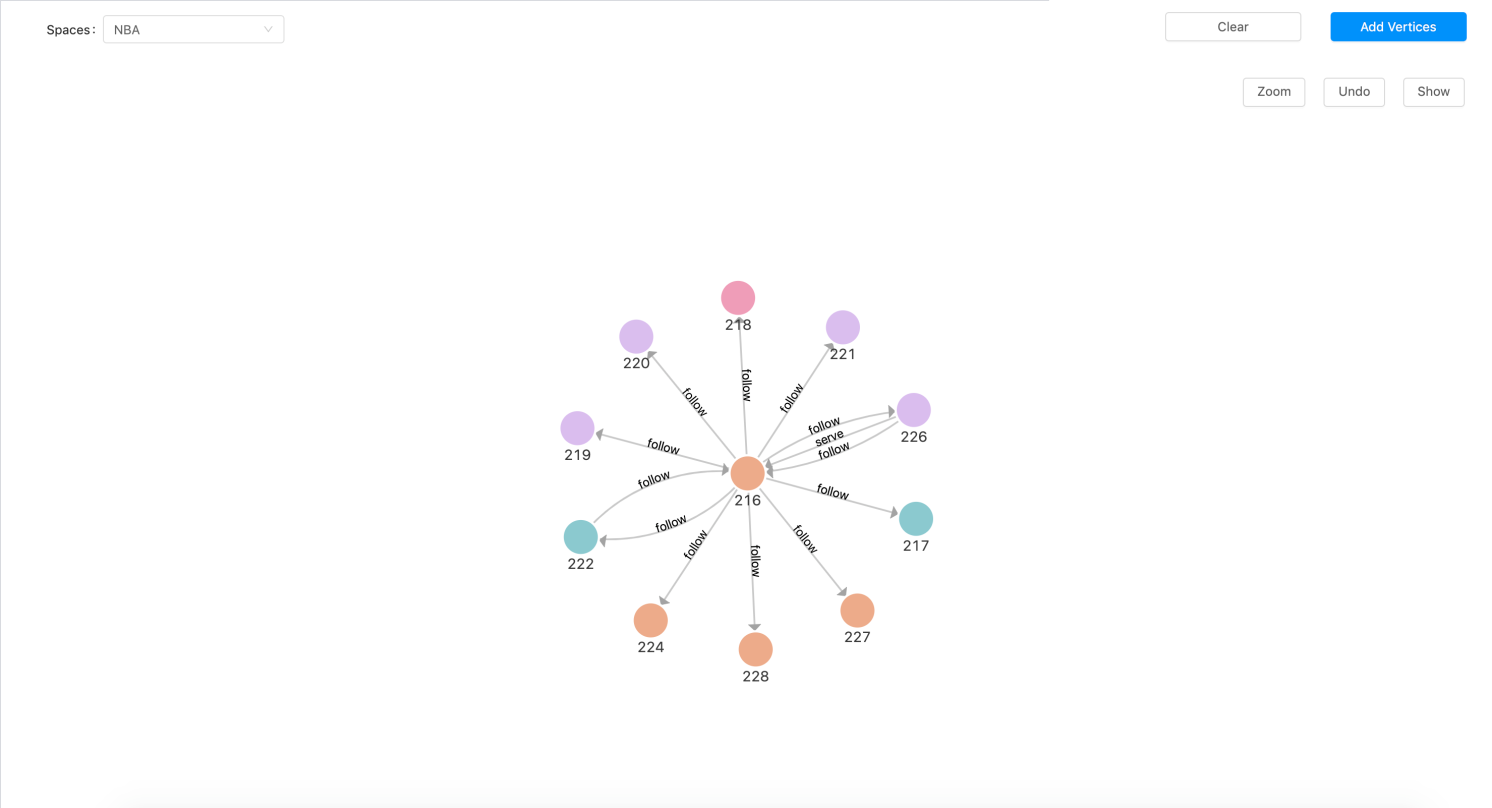 This is how we optimized the D3.js force-directed graph. There are many issues to concern and optimize if you’re building a complex relationships.

In this article we shared the two most common scenarios, i.e. presenting new nodes and multiple edges between two nodes. We will share more experiences in the future. Stay tuned!

Try Nebula Graph with Nebula Graph Studio to experience the D3.js visualization. Leave us a comment below or head over to our forum if there are any questions.