In Java, an interface or class can extend multiple interfaces. For example, here is a class hierarchy from java.nio.channels package: 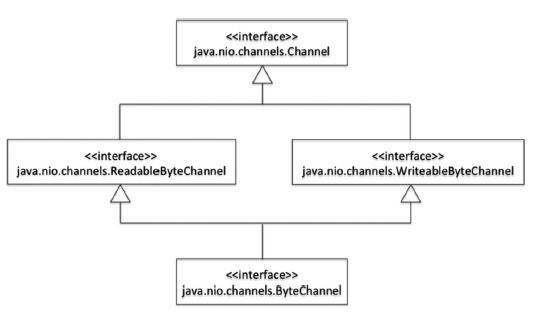 But what if we have two method definitions in the base types that have the same signature; which method would the ByteChannel interface inherit? When this problem occurs it is known as “diamond problem.”

Fortunately, rules are available to resolve methods when a derived type inherits method definitions with the same name from different base types. Let us discuss two important scenarios here.

Scenario 1: If two super interfaces define methods with the same signature, the compiler will issue an error. We have to resolve the conflict manually.

In this case, resolve the conflict manually by using the super keyword within the Diamond class to
explicitly mention which method definition to use:

After this method definition is added in the Diamond class and executed, this program prints: Interface1's foo

No compiler error in this case: the compiler resolves to the definition in the class and the interface definition is ignored. This program prints “Base foo”. This can be considered as “class wins” rule. This rule helps maintain compatibility with versions prior to Java 8. How? When a new default method is added in an interface, it may happen to have the same signature as a method defined in a base class. By resolving the conflict by “class wins” rule, the method from the base class will always be selected.