JavaScript is undoubtedly one of the most popular web programming languages. With the number of frameworks that are built using JavaScript increasing rapidly, web developers can utilize many features offered by them effectively. When it comes to effective programming, every developer faces a common objective of writing bug-free code. Every modern web browser now comes with a feature to debug the code easily using Developer Tools. Every JS developer will know how important F12 is while working on a JS application. We will now see how one can debug JS code in one of the most popular modern web browsers, Chrome using its DevTools.

Let us look at some simple JS code with a bug and try to fix that using Dev Tools.

Run the above code and you should able to see a page with two text fields and a button. Now type in two numbers in the text fields and click on the Add button. We can see that the application doesn’t do what is intended. It doesn’t display the sum. We will now fix this bug. 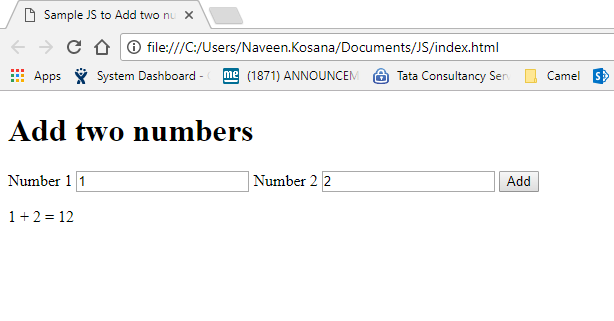 Breakpoints can be used when we want to pause the execution of code at any certain line of code. We can then check what values are stored in any variable at that point of time. 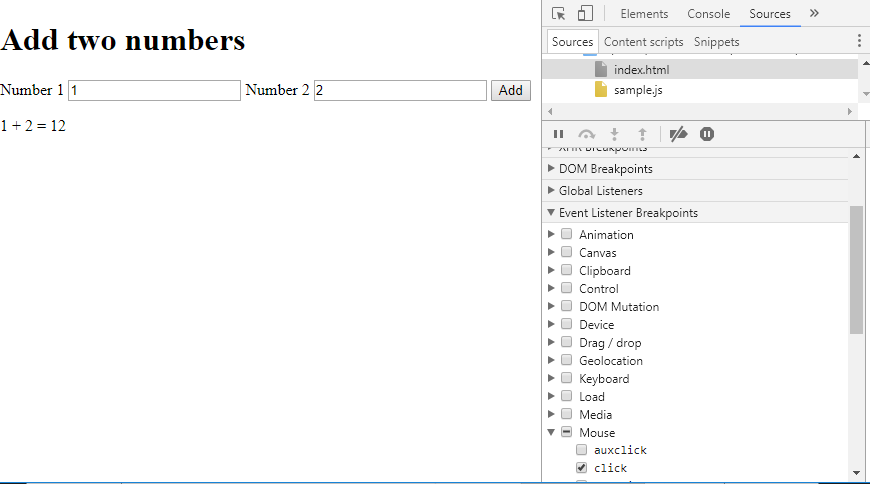 Now go ahead and try to add two numbers. When we click on Add button, the code execution is paused and the line with onClick function is highlighted. Since it’s an event based breakpoint, DevTools pauses on the line which contains that event’s handler.

Stepping through the code helps us to execute the code line by line and we can check the order in which the code is executing. We can do three different types of steps while going through a code. In the Sources panel of the Developer Tool, we can find the buttons for step into, step out, and step over.

Based on the assumption of the location of the bug, we can set a breakpoint closer to that part of the code rather than just putting on an event.

We can set a breakpoint on a certain line of code which is called a 'line-of-code breakpoint.'

Just click on the line number on the left side of the code. The color of that number changes to blue which indicates that the breakpoint is set. Now during the run, the execution will pause at that line-of-code.

When a breakpoint is set, we can easily identify what is stored in a variable at that moment of time. Let us set a breakpoint at line 11 in our code and see how the variable values change. We can check that in the Local section of the Developer Tools.

To confirm whether this is the bug or not we can use three different methods to find out how the variable sum is being evaluated.

Console.log() –console.log() is used in the code to check how the values of the variables are changing over time. But this involves manual editing of the code and we need to place multiple lines of console.log() to find where the bug is.

Console – Console is used to execute random JavaScript statements. We can overwrite variable values when debugging the code in the console. For example, we can simply give num1 + num2 in the console and hit enter. We will get the value in the next line. We can reassign the values in num1 and num2. Console is mainly used for such testing purposes.

For confirming this bug, let us find the typeof sum variable through the console.

Type in typeof(sum) in the console in debugging mode. We should see the type as a string, which confirms our assumption that the variable sum is being evaluated as a string but not a number. 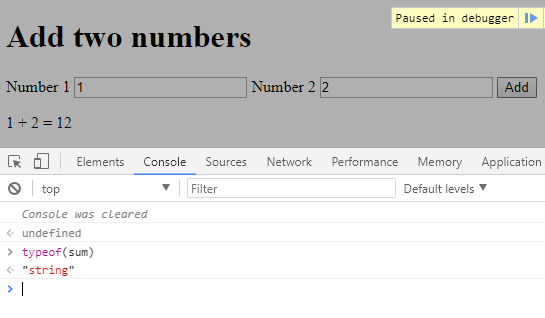 Watch – Another alternative to console.log(), and the easiest way to debug in Developer Tools, is the use of Watch Expressions in DevTools. We can simply add any variable or any JavaScript expression in the watch, and, during the execution, we can simply watch how the values or the expressions change over time.

In the Sources panel, expand the Watch section. Now click on the + symbol to add an expression.

Type typeof(sum)and hit enter. We will be able to see that the type of sum is “String.” Hence, this also confirms our assumption that sum is being evaluated as a string.

Since we have identified the bug now, we just have to convert the string inputs to a number and assign the total of numbers to the sum variable. We can change the statement on line 13 to one of the following:

We can edit the code in the Sources panel directly and save using Ctrl+S to test the fix. 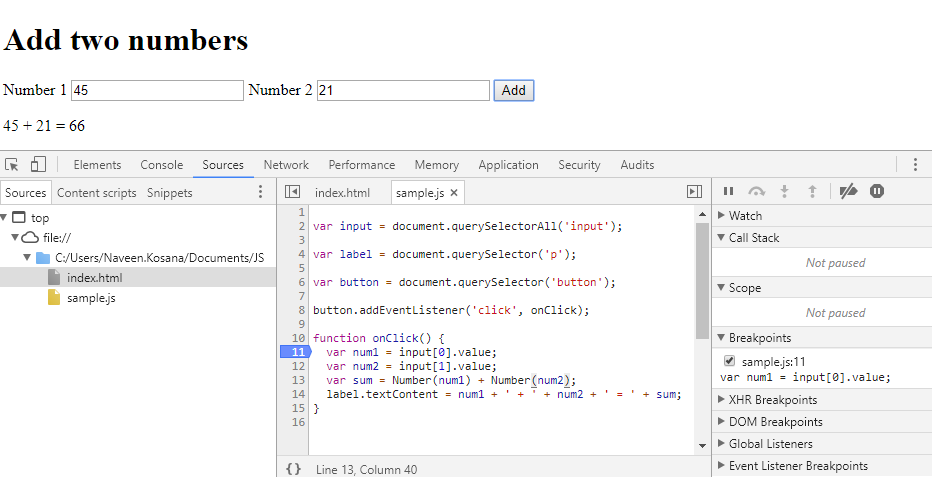 Now the application should be working fine. These are the basic steps one can try to debug a JavaScript code using Chrome Developer Tools.