JavaScript is not a new name. It is the most popular and frequently used data processing language that runs on every system. Many developers have been extensively skilled in the JavaScript language, and thus it has been continuously improving and evolving.

Node.js has been a widely used platform that successfully represents JavaScript everywhere. We have to admit that Node.js has transformed the screenplay of web development and allows developers to use JavaScript for backend development. Node.js has a large number of users with the largest developer community.

But soon, JavaScript also launched Deno, and soon people started assuming that Deno would replace node.js. Therefore, a clash of Deno vs. Node.js is bound to happen.

And why shouldn't they? After all, the developer of both Deno and Node.js happens to be the same person—Ryan Dahl.

Node.js vs. Deno: A Quick Overview

Before giving any comparison, let’s have a quick overview of both. Both Deno and Node.js are runtime environments, and as I mentioned earlier, they were created by the same person.

First, to be clear, Deno is not a sub-branch of Node.js. It is a newly discovered runtime for carrying out JavaScript and TypeScript outer the web browser.

The V8 JavaScript engine powers the Deno, and the core of the Deno is built in the Rust language.

Deno was introduced by Ryan Dahl in 2018 during a presentation on the topic “10 things I regret about Node.js.”

Deno was designed especially to control modern JavaScript and address various essential areas of Node.js. The aim of Deno is to streamline modules and build systems and offer a fast and secure server-side scripting environment.

How To Install It

Node.js is also a back-end, open-source, cross-platform JavaScript environment. It sports a V8 engine and brings off Java script code outwards from the web browser.

It provides nonparallel I/O and an event-run build that makes Node.js super agile and appropriate for scalable, real-time web applications.

Node.js comprises a large client base, and it contains top organizations such as IBM, LinkedIn, Netflix, Microsoft, PayPal, Walmart, GoDaddy, AWS, and many more.

It can be used for various purposes, but it is generally used for developing web servers and networking tools using JavaScript.

Deno vs. Node.js: How Are They Different From Each Other? 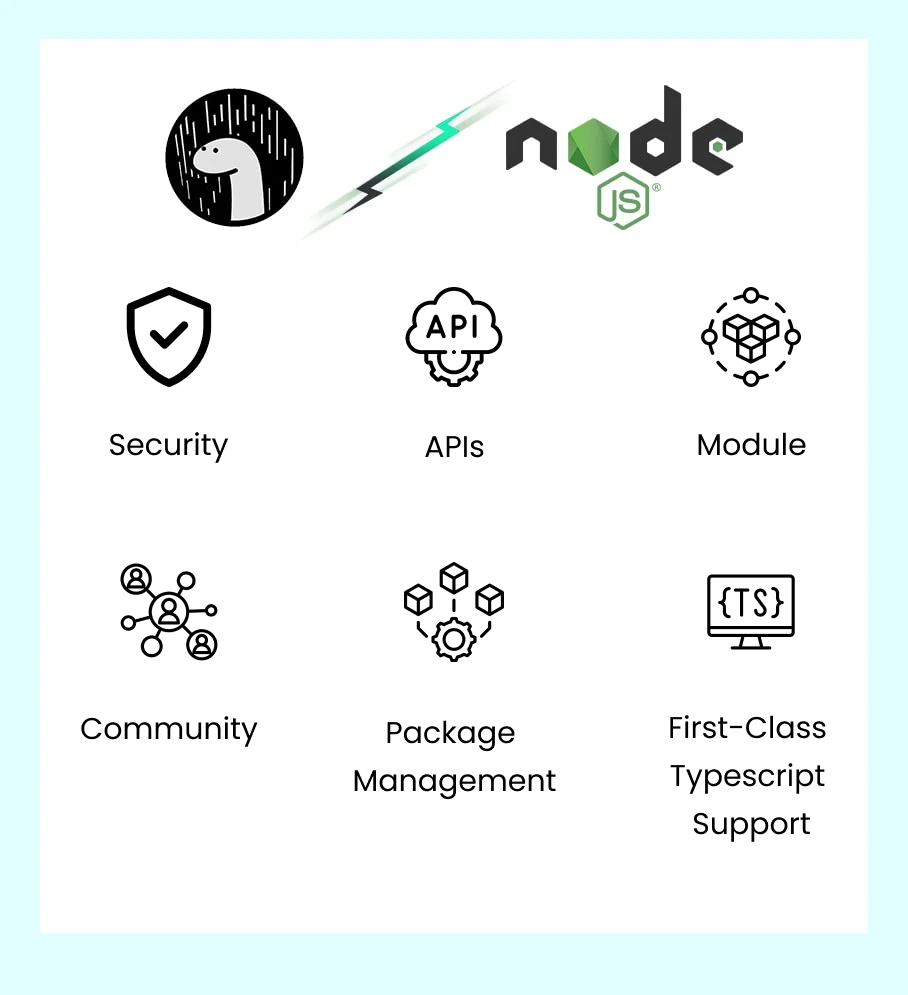 One of the main goals of Deno is to guarantee end-users the safety and security that Node.js failed to deliver.

Thus, Deno is secured by default. It means the program operating with Deno has no file or network ingress unless it is mentioned.

In Deno, the developer has to give access to an implementing script through command-line flags or dead-on runtime permission, similar to the browser execution.

Deno, by default, limits the file system and network access to run the codes in the secure sandbox.

However, Node.js permits access to the network and file systems, thus, in turn, making them susceptible to severe security concerns. When you work on Node.js, you will detect many such security issues that should be fixed to prevent your application from a ransomware attack.

In Deno, the packages are integrated directly into the URL, which is contrary to Node’s npm. Deno goes for local or remote dependencies using links similar to the browsers.

Whereas nom is the default package manager of Node.js. It is utilized to install and optimize public and private third-party packages. This online information on the package is called the npm registry.

one can import modules and utilize dependencies as code:

Node.js was introduced before the concept of JavaScript for async. Because of this, a majority of the APIs were introduced to support error-first retrieval. This exercise leads to wordy and clumsy codes.

However, the Node.js programmers have ingressed the async syntax, and they have to manage the backward affinity through APIs.

In Deno, things are nothing like this. It fosters modern JavaScript features and uses async functions. The Rust programming language offers promising abstractions called "Futures." Because of this, Deno makes it easier for developers to incorporate futuristic APIs into JavaScript.

TypeScript is a prolongation of JavaScript that permits customers to offer type data. Deno carries TypeScript out of the box by using a TypeScript compiler with caching techniques.

Node.js packages are encrypted in JavaScript. It does not have first-class typescript assistance, but it has a prevalent typescript that is extensively used in the Node.js world.

Since Typescript is an umbrella term of Javascript, Deno can also drive it:

Deno employs the ES module as a default module structure. The ES modules are the general format for bundling JavaScript code.

Node.js makes use of the CommonJS standard. Node.js does support the ES module, but it is in an experimental stage.

Node.js holds the largest, most dynamic, innovative, and open-source communities all around the world. And it is all designed and maintained by the community.

Therefore, most programmers use Node.js and run thousands upon thousands of apps. However, Deno is a new player in the market, and it is still in the evolving and growing phase.

This is the most awaited topic. As it covers the answer to the most asked question: Is Deno faster than Node.js? Or who wins the battle?

Well, the wait is over.

The answer to these questions will purely depend on what you want. Like, if you want more information through HTTP, then Node.js is a good choice as the C++ basis handles the majority of the data efficiently.

But don't slash Deno that easily. In terms of dormancy, Deno is an undisputable leader. It genuinely works with lower delays. So, if you are thinking of developing a browser online game, then Deno could be your optimal choice. Its runtime will give more tools to offer average gamers a greater experience.

Still, the overall image of the performance of Deno vs. Node.js is inconclusive. Both platforms are high-speed, with no significant difference between them.

A Quick Comparison of Deno vs Node.js

Is Deno More Secure Than Node.js?

The answer to this question is not that frank.

Deno for JavaScript is a much more secure platform. This is because Deno needs various permissions for various actions.

And beyond this, the Deno runtime starts everything in a highly protected sandbox. In contrast, Node.js focuses less on all the permission parts, thus giving some potential loopholes.

The problem with Deno here is related to its package system. Node.js provides a centralized depository for all the libraries, while you can download Deno packages from several places.

And seeing this feels like Node.js is still very far from being perfect.

The NPM store of Node.js compiles several versions of the packages. And so, controlling things there is very easy. Because of this, scandals have taken place in the past.

However, with Deno, one can achieve audits because they offer access to code rather than assembled options.

This makes the Deno vs. Node.js competition a bit tricky. Although Deno is secure and well-tested, if you are building something large, you will need advanced libraries, and node.js will be best for this.

This question has been revolving from the very first day since the launch of Deno.

Deno is definitely better in some situations but inferior in others. So, to answer your question, you have to recognize your circumstances and requirements before making any decisions.

And Deno has undoubtedly displaced Node.js.

Deno is not a regular upgrade of Node.js. Even its developer, Dahl, has stated in several interviews that Deno is an alternative rather than a replacement for Node.js.

And surely, in the future, Deno will attract many programmers.

The Deno vs. Node.js competition is always interesting to watch, especially after knowing that they are both developed by the same developer.

Programmers use Deno for one set of tasks and Node.js for another because both are capable of tremendous backend development opportunities.

There is still time for Deno to grow, and it won’t replace Node.js that easily.

I am saying this because if you have read the whole article, you know that Deno is still like a baby in front of the huge Node.js community. Moreover, Deno has a bright future.

What’s your point of view in this debate of Node.js vs. Deno.?

Published at DZone with permission of Aniruddh Agarwal. See the original article here.